Synapses are pretty much one-to-one

Here's some EM pictures of synapses, from Wikimedia commons: 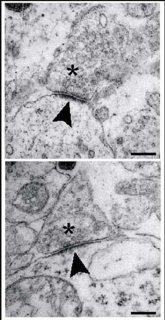 You should gather from these images that these are super organized structures. There's a dense, dense gathering of cellular machinery at the synapse that creates a dark electron-dense region shown by the arrows. There's no room for more than one cell to be directly involved in this area, it's one membrane closely coupled with another membrane. It's as if you put the palms of your two hands together.

Some neuromodulators (and sometimes traditional neurotransmitters) are not released synaptically, though, and are just dumped into the extracellular space from where they diffuse in to the cleft or bind outside the synaptic region.

There can be multiple connections between two given cells

Though a synapse is a one-to-one connection, axons make multiple synaptic contacts as do dendrites. Though this can mean that cells receive and send input to 1000s of different cells, it's also very common for there to be multiple individual synapses between two specific cells.

For some examples, Tamas et al 1997 looked at synapses made from inhibitory interneurons to excitatory cells in visual cortex:

Note in this paragraph they are literally talking about 5 specific pairs of cells, where they trace both cells in EM. This is an exhausting process. The presynaptic cells were one basket cell, three dendrite-targeting cells, and one double bouquet cell. The post-synaptic cells were all pyramidal cells except one was a spiny stellate cell. In the five pairs they found 15, 17, 8, 3, and 10 connections. Of course they could have missed some, too.

10
How does an inhibitory synapse communicate to the cell body of a neuron?
4
What are the functions and differences between axons and dendrites?
6
Neurons with thousands of connections: where are the extra connections coming from?
10
How are neurons / synapses "biased"?
1
Excitability of neurons
2
Relationship between membrane current and voltage in neurons
3
Are synaptic boutons always located on axons?
2
What is the number of synaptic vesicles in an axon terminal?