Why does UV radiation from the Sun cause skin cancer?

What is the specific mechanism makes non-ionizing UVA and UVB radiation carcinogenic? Can lower energy light, like visible light, be carcinogenic because of this mechanism, or is there some kind of threshold within spectrum at which electromagnetic radiation does not induce cancer in humans?

Ionizing radiation can be mutagenic, which can cause cancer. However, this only applies to high-energy electromagnetic radiation with photon energies exceeding about 5 eV, or about 248 nm. (The FCC defines this threshold even higher at 10 eV, or about 124 nm!) These photon energies correspond to UVC, which is blocked thoroughly by the atmosphere, meaning Sunlight does not appreciably contribute to the ionizing radiation we receive on Earth. Therefore, the mechanism with which solar UV radiation induces cancer must be different from higher energy electromagnetic radiation, right?

Rather than 'breaks' caused by high energy radiation, UV radiation causes chemical modifications of the bases ('letters') that make up DNA. There are four bases in the DNA alphabet abbreviated to A,T,G or C belonging to two classes. A & G are guanines while T & C are pyrimidines.

When you have pyrimidine bases next to each other on a DNA strand, they can react to form photoproducts or pyrimidine dimers. These block transcription and replication and need to be repaired by nucleotide excision enzymes (only route in mammals) or photolyase enzymes (plants, many other organisms). TT dimers are the most frequent but dimers with a C cause more trouble as they can be imperfectly repaired causing a transition mutation. If they don't get repaired in time they can cause stalled replication which causes all kinds of trouble and can result in mutations that lead to cancer. You can find more on the wiki page.

There are very many photochemical reactions: Up to 50–100 mutagenic reactions on DNA per second might occur in a skin cell during exposure to sunlight, but are usually corrected within seconds by photolyase reactivation or nucleotide excision repair. (That's just DNA, excluding O2 and other cell constituents) chemist ref and wiki ref

Molecules that absorb photons can adopt transient excited states whose chemical and physical properties differ greatly from the original compounds. New chemical species arise, which can cleave, glue in different places, change structures, combine with other molecules. They can also transfer electrical charge, protons and hydrogen atoms, to other atoms.

The elevated states of compounds are stronger acids and reductants than the ground states.

Free radicals from UV have an indirect effect on DNA: 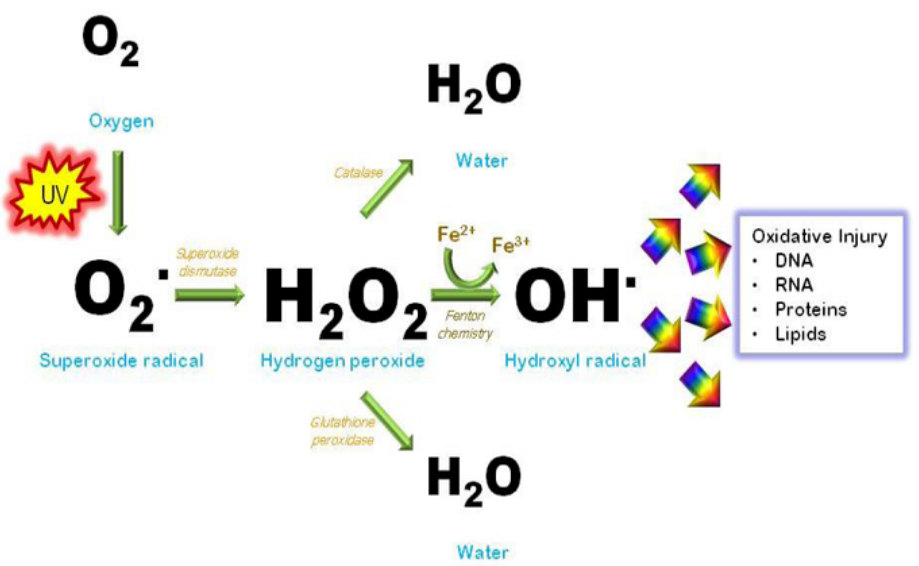 Superoxide is partitioned by the enzyme Superoxide dismutase into O2 and H2O2, eventually giving way to hydroxyl radicals OH.

Hydroxyl radicals can attack the deoxyribose backbone and bases, potentially causing a plethora of lesions that can be cytotoxic or mutagenic.

Cyclobutane pyrimidine dimers are the most common DNA mutation cause by photons. 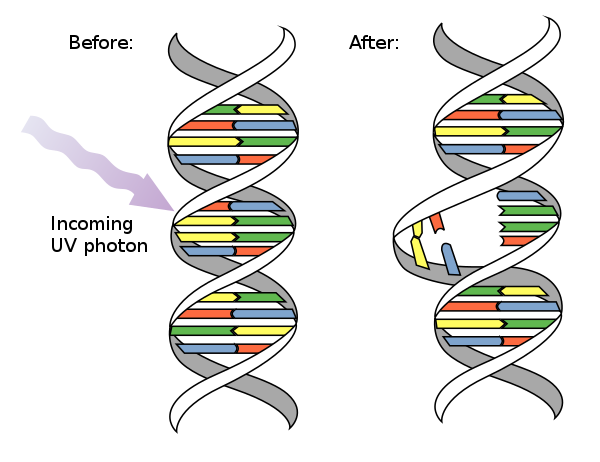 it can also be thiamine-cysteine.

UVB is a lot more reactive with DNA, and recent studies find that UVA travels deeper and can also cause CPD dimers.

Photochemistry in cells is a bit like throwing a spanner at a billiard table, reactions can occur with hundreds or thousands of organic compounds, one of those being DNA.

The following is the answer I posted prior to that:

Radiation/electromagnetic waves are an extended version of the visible light rainbow spectrum, which go from radio waves to X-rays and Gamma rays.

The lower energy waves (longer wavelengths) can raise electrons to higher energy levels in the atoms. The higher energy waves (shorter wavelengths) can knock electrons totally off of the atoms, leaving a positively charged atom (a positive ion) and an electron. Since electrons are often shared between two atoms of a molecule like an atomic glue, knocking an electron away can sometimes reconfigure or cleave molecules in two. 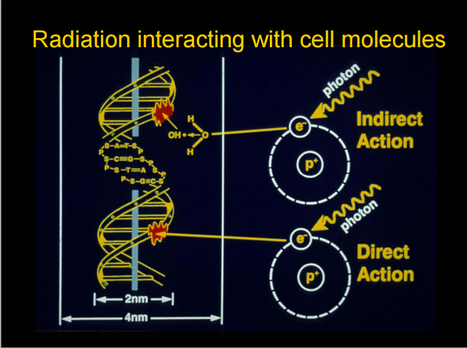 The ionisation line is also the Lyman-alpha line, which is the wavelength absorbed by hydrogen atoms, the smallest atoms. All radiation shorter than hydrogen absorption is known as ionising radiation.

Physics/Chemistry aside, as @mimat and @aliential awesomely explained, it's always good to keep in mind that cancer, in general, is a statistics game, in the sense that at any time, there's a cell suffering mutation in your body, and it is not manifesting as cancer simply because your body evolved to deal with those situations.

You can take a walk on the beach normally without any worries about developing skin cancer, just because this acute dose of UV radiation is minuscule in comparison with your expected lifetime. The real problem is the chronic exposition to those radiations, which leads to more chance of mutated cells appearing, and from those, more of them that would suffer mutations in the specific genes that allow them to trick your cell's defense systems and immune response.

Cancer is a very complex pathology that cannot be explained just by one factor (UV degradation of DNA in the case of skin cancer). There's a lot of variables like the individual genetic predisposition, to cite just one of them.

6
Why does radiation sickness cause hair to fall out?
6
Can radiation therapy cause cancer?
1
Does cell phone radiation promote longevity?
2
Why sun rays don't burn our skin?
1
Why does asbestos cause cancer?
4
Why does UVA penetrate deeper than UVB, though it's weaker?
14
Can UV radiation be safe for the skin?
0
How far can free radicals from UV radiation diffuse through the skin?