Below is the mechanism for the reactions of the pyruvate dehydrogen complex, which oxidatively decarboxylates pyruvate and transfers the acetyl group to coenyzme A for further metabolism in the Krebs cycle. 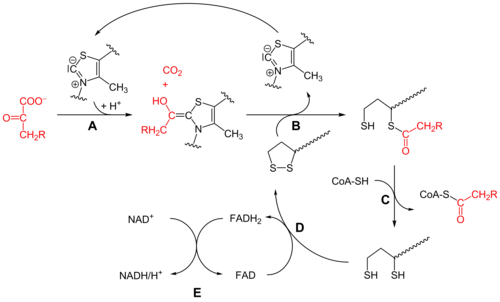 I find the chemical energetics of this difficult to understand. According to standard tables of redox-potential for half reactions, $\ce{FAD}$ is a stronger oxidising agent, and a weaker reducing agent, than $\ce{NAD+}$, which is why it used in the succinate dehydrogenase reaction, for example. How, then, can it reduce $\ce{NAD+}$?

If $\ce{FADH2}$ is really able to reduce $\ce{NAD+}$ it should generate as much ATP in oxidative phosphorylation after oxidation of succinate to fumarate, despite the relatively low free energy change for that reaction. But that is absurd.

Summary
The redox potential widely quoted in text books for the half-reaction reduction of FAD to FADH2 is indeed inconsistent with the observed direction of several reactions involving this coenzyme, including its reduction of NAD+ in the dihydrolipoamide dehydrogenase reaction. The reason for this is that the value quoted is determined for free FAD in aqueous solution, which does not equate to the situation within the enzyme. In its tightly bound state in flavoproteins, the immediate environment (and, in some cases, covalent linkage) alters the affinity of the flavin ring for electrons, hence causing the redox potential to deviate from that in solution. The extent and direcction of this deviation differs in different flavoproteins.

Restating the problem
The basic idea of chemical theromodynamics is that reactions are energetic favourable if the (Gibbs) free energy change is negative (see e.g. Section 14.1.1 of Berg et al.). Although the actual free energy change, ΔG, is influenced by the relative concentration of the reactants, the usual starting point for assessing this in biochemistry is the ‘standard’ free energy change at pH7 and 25˚C — ΔG0′. In the case of oxidation/reduction reactions the standard oxidation–reduction potentials E0′ of each of the two half reactions are usually known (as they can be measured in solution), and one calculates the ΔG0′ from the oxidation–reduction potentials of the two half reactions, using the formula:

What is important for this discussion is not so much calculation of actual values, but determining their sign, as for a negative ΔG (reaction energetically favourable) a positive ΔE is required. Let us consider an example using the much abbreviated version of Table 18.1 of Berg et al. Biochemistry, below: Oxidant Reductant n E´o (V)

Consider one of the energy-generating oxidation reactions of the Krebs tricarboxylic acid cycle:
α-ketoglutarate + NAD+ → succinate + CO2 + NADH
This is made up of two half reactions:
(+ 0.67 V) α-ketoglutarate → succinate
(– 0.32 V) NAD+ → NADH
which gives an overall ΔE0′ of + 0.35 V, i.e. a negative ΔG0′, which is consistent with the actual direction of the reaction and the production of energy. (Actual worked numeric examples can be found in Berg et al.)
Now if we consider the dihydrolipoamide dehydrogenase reaction
NAD+ + FADH2 → NADH + FAD
The two half reactions are:
(+ 0.22 V) FADH2 → FAD
(– 0.32 V) NAD+ → NADH
This gives an overall ΔE0′ of – 0.1V, i.e. a positive ΔG0′, which, as the poster astutely points out, is not consistent with the direction of the reaction.

Resolving the apparent anomaly
Berg et al. do, actually, remark on this in section 17.1.1 on the pyruvate dehydrogenase complex:

So, how is “the electron transfer potential of FAD altered by its association with the enzyme”? The quotation from Ghia and Massey1 provides a general summary:

In the specific case under consideration — dihydrolipoamide dehydrogenase — it has been established2 that a positively charged lysine-57 sidechain (numbering for the A. Vinelandi enzyme) that increases the redox potential (with, perhaps, a small contribution from the backbone N of alanine-326): 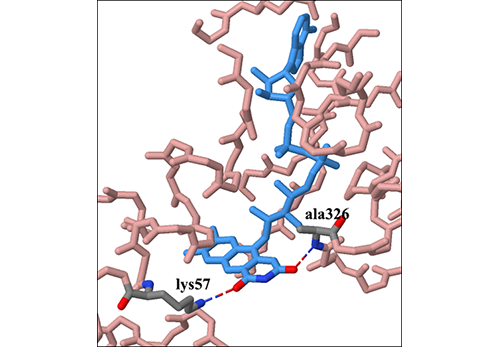 [FAD environment in dihydrolipoamide dehydrogenase from A. Vinelandi. NAD is shown in light blue, except for the O and N atoms at the end of the flavin ring interacting with the protein. A section of the latter is shown as a wireframe in salmon pink without sidechains, except for lys57 and ala326. (Own diagram from 3LAD.pdb)]

A second apparent anomaly and its resolution
In drawing attention to the apparent anomaly in the reduction of NAD+ by FADH2, the poster suggested that this would imply one should by able to obtain enough energy to produce 3ATPs from reducing FADH2. The problem with this is that one actually needs FAD to have a lower redox potential to perform the reduction of fumarate that occurs in the Krebs cycle:

Berg et al. are rather coy on this one. They do not comment, but in their Table 17.2 of free energy changes in the steps of the TCA cycle — where all the other values are given as exact figures — they quote “~0” for this step.

This implies a higher (more positive) redox potential for FAD than the –0.22 quoted in the table — certainly not the lower one of dihydrolipoamide dehydrogenase.

I turns out that this is, in fact, the case. In succinate dehydrogenase (aka as fumarate reductase) FAD is covalently attached to a histidine residue (his44 in E. coli) at the other side (position 8) of the flavin ring3. 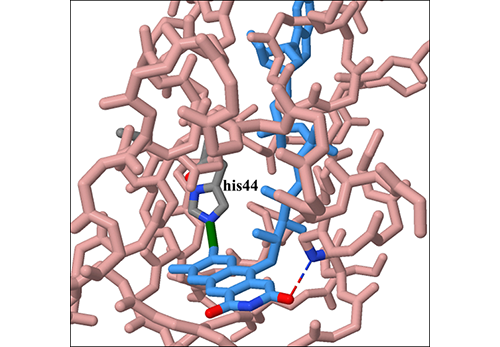 [FAD environment in succinate dehydrogenase from E. coli. NAD is represented as previously. A section of the latter is shown as a wireframe in salmon pink without sidechains, except for his44 and a backbone N. (Own diagram from 1L0V.pdb)]

Not the answer you're looking for? Browse other questions tagged biochemistry metabolism energy energy-metabolism or ask your own question.