By selecting sex cells after meiosis, would it be possible to create two offspring with inverse parental DNA of one another? [closed]

Would it theoretically be possible to select two sex cells after a male meiosis (filtering out the two where crossover had taken place) and combine each with two sex from a female meiosis (imagining they were all egg cells, even though only one would be) to create offspring with inverse inherited parental DNA of one another?

For example: If the mother's DNA is AB and father's is CD then the offspring could have AC and BD - inherited from both parents but completely different from one another.

In practice? It's difficult to isolate the exact daughter cells (sperm) from the same meiotic event, have these cells complete maturation, and only then have them fertilize an egg. Normally you need quite a lot of sperm cells even with in vitro fertilization, but also in principle all you need would be a single sperm cell to make a zygote!

To address some misconception: when you say "inherited from both parents but completely different", that applies also for regular sex cells and fertilized eggs. You don't need to fish for the precise 2 daughter cells following meiosis to get this outcome. Mitosis produces 2 genetic copies, while meiosis in humans produces 4 unique daughter cells. All individuals, as diploid as we are as humans, are products of genomes that have been very well shuffled (recombined).

Reality: the real-life reasons to perform such a procedure would be taken as very dubious, so I don't think realistically anyone would perform this. But in the designer baby era of the future, who knows!

Here there be monsters

The biggest problem with your scenario as presented is that the complementary genes in the female do not go into the "secondary oocyte" but into the "first polar body" ("2" below). 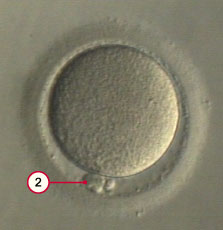 The first polar body remains in the perivitelline space beside the oocyte, but it is a tiny thing, generally considered too small to potentially make a zygote. It is emitted as a diploid during the first division of meiosis, and divides again afterward. I think the one below has already divided.

Now, because it's impossible, we should naturally expect to find such a case, and I will not disappoint: Bieber, 1981. In that case the polar body had not divided yet, and the resulting twin, within the chorion, was a triploid and severely deformed "acardiac monster". A 2015 review mentions polar body twinning without describing the possibility of diploids, so I'll assume this hasn't actually been demonstrated. I know the first polar body is a bit half-hearted about its division. 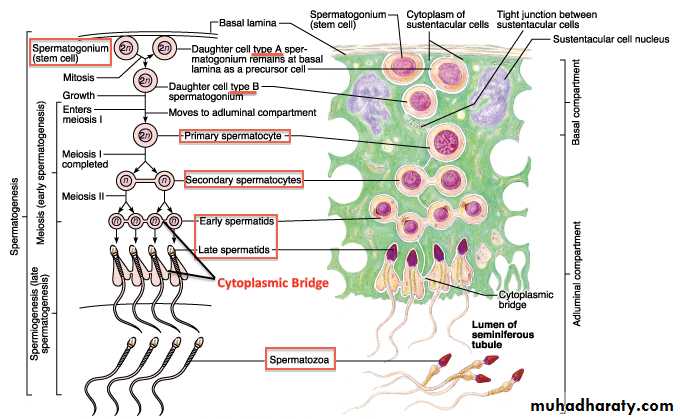 It should be relatively straightforward to obtain immature sperm while they are still linked by cytoplasmic bridges as illustrated above, do in vitro sperm maturation to obtain complementary sperm, and attempt some sort of fertilization of egg and a daughter of the first polar body. The resulting twins would share a chorion but monochorionic and diamniotic. Such a procedure would still be very likely to produce a malformed embryo due to the development of a very tiny zygote. I was concerned about epigenetic differences, but after a helpful comment, I did find a reference that the methylome is similar to that of the secondary oocyte, and a paper reporting that it is possible to transfer polar body nuclei to oocytes with 42% viability. Given remaining uncertainty and a lack of apparent medical necessity, it might still be more advisable to stick to routine human cloning with germline genetic modification. :)

8
Do the eggs for larger litters come from the same meiosis events, or different ones?
3
Doesn't meiosis form two pairs of similar cells and two pairs of opposite cells?
1
How do biologists determine the parents of a child
1
Is it possible to fuse DNA from two sperms into one sperm?
0
Why does inbreeding cause genetic defects, but cell division in one's own body does not?