The well-known cartoon imagery of porcupines shooting their quills at opponents in a fight is just that: a silly cartoon concept that isn't real. But it makes me wonder, does that mechanism exist elsewhere in nature?

Are there any animals whose bodies produce solid projectiles that are used as launched/thrown weapons? (Not looking for liquid ranged weapons such as skunk spray, bombardier beetles, etc.)

A good exemple should be the “harpoon” in cone snails (Conidae), which is created from a modified tooth inside their proboscis. 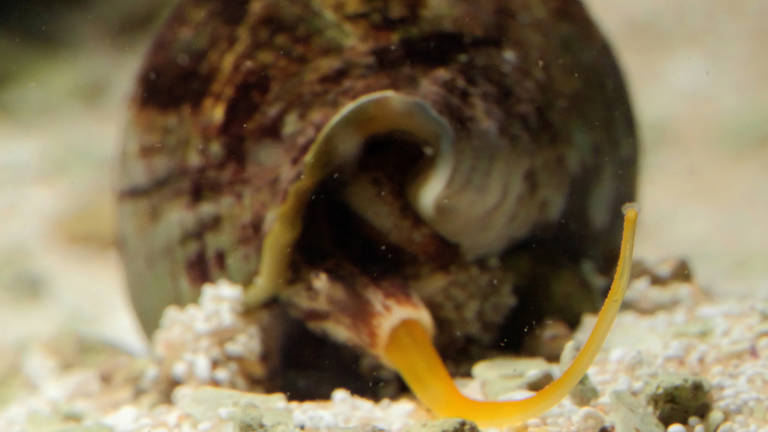 (Cone snail with proboscis, from KQED.org)

These harpoons are not re-used, and a cone snail can have up to 20 harpoons at different stages of development (see Cone snail toxicity).

It is also worth noting that the harpoon and its venom is a potent defence weapon also against humans. One cone snail can contain poison to kill about 700 people, and people stung by cone snails can get severely injured or even die (fatality reported to 15-75% according to Kapil et al, see below).

If you would include use of tools, in projectile use/shooting animals, apes and elephants are known to use stones as throwing weapons (see wiki-page linked below).

An excellent example (unless you consider this a tool) of a weapon using animal would be the "web casting spiders" which are a diverse group of spiders known as the Deinopidae. These spiders create a special elastic web that they hold between their fore-feet, and then dangling down from a surface, they expand and push the web onto their prey.

Although not a hard projectile the Archerfish shoots water

It is a common notion that porcupines can shoots spines but in reality, they can't. But there are some animals that can shoot/throw projectiles at the target as a result of either offensive or defensive mechanism. The projectile can be anything ranging from spikes or thorn to big objects like rocks, sticks, nuts or even faeces. You can find the details in the Wikipedia article.

The Wikipedia article mentions tarantulas that have a dense covering of hairs called urticating hairs on the abdomen that they sometimes use as protection against enemies. They can kick these hairs off by flicking them into the air at a target using their back pairs of legs. These fine hairs are barbed and designed to irritate and can be lethal to small animals such as rodents as well as humans.

Sea cucumber can expel its internal organs through its anus which can be sticky and sometimes contain a toxic chemical that can kill predators.

Spitting spiders will shoot their strands of web (extremely quickly) toward prey: https://www.youtube.com/watch?v=DFozCr_tj8I

There is a plant called Sphagnum that disperses its seeds through an explosion that functions similar to that of a cap gun. It's pretty sick.

here it is in action

Fieldfares guard their nests by attacking predators with their poop. Arguably feces is undigested material, but it does contain some secretions made in the body. Admittedly, fieldfare poop is more of a paste than a solid.

No, there are not animals which produce solid projectiles to shoot/launch/throw for defence or hunting. I think these criteria mean "aimed and detached".

There are tethered projectiles like cnidocyst in Cnidaria, but they don't detach (Wikipedia/cnidocyte). Harpoon-like organ in cone snails which is mentioned by @fileunderwater doesn't detach from the body (albeit detaches internally) and it must work in this way in order for the snail to hold and draw its prey (Wikipedia/cone snail). Spitting spider which is mentioned by @JimN doesn't store solid silk to shoot, it sprays the materials (Wikipedia/spider silk). It seems that the nearest thing is the urticating hairs in tarantula which is mentioned by @NilayGhosh; but tarantula doesn't shoot, it detaches hairs to make them airborne (Wikipedia/urticating hair). As the question has those criteria, these don't count.

There is a similar question on the possibility of that ability in worldbuilding.stackexchange (link) which you can review.

Not the answer you're looking for? Browse other questions tagged zoology anatomy predation or ask your own question.

2
How did the horned lizard evolve?

23
Do immortal organisms exist?
8
Do animals exist which have good vision, but see only grayscale?
26
Why are there no known animals with an odd number of legs?
8
Examples of animals with 12-28 legs?
2
do game animals have poor eyesight?
3
Animals with substantial five-fold symmetry besides starfish? Any land animals?
1
Why did some animals evolve inward-slanted legs?