Why is fructolysis independent of glycolysis?

Why is this so?

It should be just as easy to phosphorylate fructose to both compounds. Wouldn’t it be more economical to use a single reaction, so everything would be easier to regulate? As there are several disorders that arise from the deficiency of enzymes used in fructolysis, wouldn’t there be a selection pressure against two separate metabolic pathways?

Thanks for David's criticism; I see the confusion, I actually meant that it is mainly metabolized in the liver. I don't really have any real sources as I do not have access to much and quite a large portion of online resources is behind paywall. After a bit of digging I was able to find an overview that reiterates most of my claims. Sorry for not being able to provide more.

Above are two excerpts from Chapter 19 - Fructose-Induced Hypertriglyceridemia: A Review. This source also (albeit vaguely) states that the resulting triose phosphates (glyceraldehyde and dihydroxyacetone phosphate) can and will enter pathways like glyconeogenesis, gluconeogenesis etc.

Up until this point in fructose metabolism, there have been no rate-limiting steps and, as a result, there is an increased amount of substrate leading to metabolic pathways from triose phosphate (i.e. glycolysis, glycogenesis, glyconeogenesis, lipogenesis, and fatty acid esterification).

Another source for my assertion that fructose is mainly metabolized to fructose-1-phosphate (Elsevier's Integrated Biochemistry):

Unique Characteristics—Aldolase B Specificity Fructokinase, like glucokinase, is found primarily in the liver. Unlike hexokinase and glucokinase, it phosphorylates the sugar at the C-1 position. Aldolase B, which is specific to the liver, works on both F1,6-BP and F1P. In extrahepatic tissues such as muscle or adipose tissue, fructose is phosphorylated to F6P by hexokinase.

Also, a possible lead, from Fructose: Absorption and Metabolism. Encyclopedia of Human Nutrition:

The allosteric inhibition of PFK effectively reduces the rate of glycolysis and decreases hepatic glucose uptake overall. In contrast, the entry of fructose carbons through the pathway proceeds without this limitation.

Using different enzymes (and therefore a different pathway) allows regulation of glycolysis in the liver without unnecessarily affecting fructolysis.

metabolism carbohydrates
Share
Improve this question
edited May 11 '21 at 22:51

“Why?” Questions — A Note of Caution

Before addressing this question I think it important to consider what is meant by a “Why?” question in biology. This can be a trap for the unwary if one is not clear whether a question is answerable objectively or only speculatively. There are two main types of “Why?”questions:

Mechanistic questions can be answered objectively if there are sufficient experimental observations. Rationalization questions cannot.

Rationalization is helpful to try to make sense of observations — to provide a framework for further experimental work. It is useful in teaching and learning, which is why one encounters it frequently in text books. But just because it is in text books it should not be regard as on a par with the facts described therein. It is just an opinion, an interpretation, which should be regarded critically. There is a danger in accepting an inadequate explanation, just because it is the only one that has been proposed for something that is difficult to understand but we think that must have an explanation.

An Answer to the Mechanistic Question 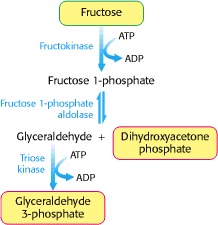 Trying to Answer the Rationalization Question

“How can one rationalize the fact that a separate pathway for fructose metabolism exists?” The explanation given in the Encyclopedia of Human Nutrition — that it allows separate regulation of glucose and fructose utilization — seems possible, but fails to explain the circumstances in which it would be advantageous for fructose to be converted to pyruvate, but glucose to, say, glycogen. In the absence of this I would say that there is no convincing explanation, and that one should carefully consider a number of different possibilities:

In conclusion, I personally cannot see a rationale for the separate pathway of fructose metabolism to pyruvate, although I believe that there must be one.

Let us use the question to consider arguments in this area. The approaches that I suggest may — in principle — be valid are those relating to actual mechanism. One can consider the number of evolutionary events that need to occur for a new pathway to evolve — the more steps, the more difficult. (I have used a similar argument in another SE answer). In this question the implicit argument is:

“The evolution of the pathway from fructose to glyceraldehyde phosphate via fructose 1-phosphate requires three steps, whereas that for a highly specific enzyme that converted fructose to fructose 6-phosphate would require only one.”

If one accepts this argument, it would suggest that there is some rationale for the fructose 1-phosphate pathway that has escaped us. Although this also seems likely for other reasons, one needs to ask whether the argument is correct. Did three separate enzymes really evolve to accomplish this, or were perhaps some of the enzymes already present and serving other purposes?

Two examples of common type of argument that I think are invalid are in the original question.

“As there are several disorders that arise from the deficiency of enzymes used in fructolysis, wouldn’t there be a selection pressure against two separate metabolic pathways?”

Selection pressure against causes of a human disease require them to have a severe effect on the survival of the species, to cause death before the individual is of a reproductive age, and to be relevant to early humans. Minor enzyme deficiency disorders of fructose metabolism, or even disorders arising from modern over-consumption of sucrose would exert absolutely no selective pressure. As it turns out fructokinase (EC 2.7.1.3) is widely distributed in nature — If one looks up fructose metabolism in fruit flies on KEGG one can follow a trail to a long list of species in which the enzyme is present. The point that I think this demonstrates is that for biochemical evolution, one needs to think when and where the pathway might have evolved.

The second example of argument that I think are invalid is

“Wouldn’t it be more economical to use a single reaction, so everything would be easier to regulate?”

I refer to this type of argument as “playing God” or “second guessing Nature” as to me it presumes that one is in a position of such knowledge and wisdom that one is able to propose the optimal design for life.

Economical in what sense? Is our concept of economy the over-riding feature driving mammalian evolution? Multiple reactions and isoenzymes abound in the metabolism of animals. Apparently ‘wasteful’ energy- or material-consuming reactions like splicing are everywhere. And the regulation of intermediate metabolism is mind-boggling in its complexity. Regulation clearly evolved after the pathways, and “ease” of doing this does not seem to have been a driving force in evolution.

The lesson I draw from this is that even the most knowledgeable molecular scientist is in a poor position to say what is economical or efficient, and to predict the outcome from the cost/benefit tradeoff Nature will make or has made to do things “better”. And it is difficult to say what is “better”.

Not the answer you're looking for? Browse other questions tagged metabolism carbohydrates or ask your own question.

5
How are non-glucose sugars metabolized in the body?
1
Why is glycerol the backbone of fat?

3
ATP utilized in Glycolysis vs. Gluconeogenesis
3
Can cats use ketone bodies as only source of energy?
5
How are non-glucose sugars metabolized in the body?
11
Why isn't the phosphoglycerate kinase reaction of the glycolysis pathway irreversible?
3
How is the rate of gluconeogenesis controlled in the cell?
2
Does Glycolysis produce lactate, or pyruvate?
2
What happens to glucose taken up by the liver in type 1 diabetes?