Why do T cells have MHC II receptors?

I have seen the answer to this question which says that T cells do not express MHC II proteins which would make sense.

However, my textbook "The immune system" by Peter Parham disagrees. It says that T cells do gain MHC II receptors after activation. 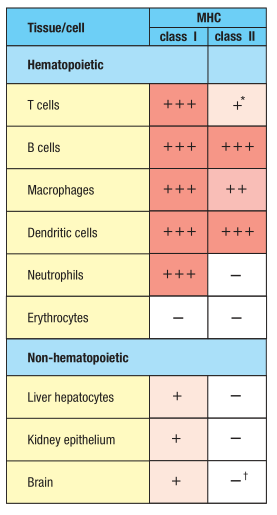 I cannot see why this is needed. MHC II molecules are for CD4 cells (helper T cells).

If the T cell presenting the antigen was a CD4 cell, then that seems useless, because this cell was already the one that could recognise this particular antigen - so why show it to others? The chance that another T cell that could recognise it too would be incredibly small no?

I guess I can see the merit of a CD8 T killer cell to show the antigen, as it could alert other CD4 T cells to come assist (although cytokines seem like a better method...)

So what is the purpose of T cells, in particular CD4, of showing MHC II proteins?

immunology antibody antigen
Share
Improve this question
asked May 11, 2021 at 23:52 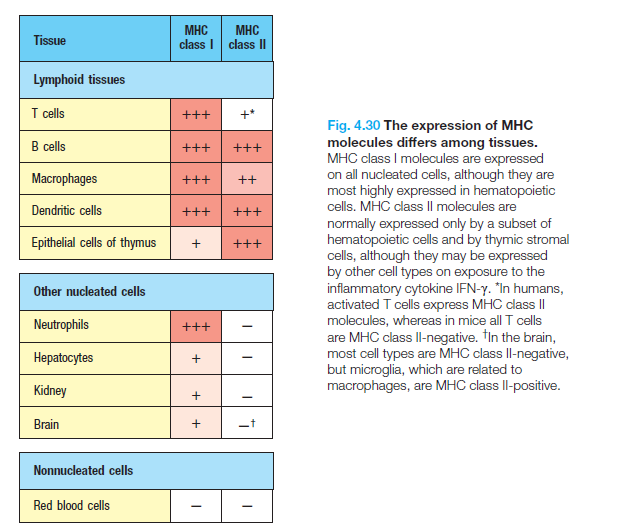 That's the description in my book which has the same image.
The book is: Janeway's Immunology (9th Edition)

Excerpt from the book:

The processing and presentation of pathogen-derived antigens has two distinct purposes: inducing the development of armed effector T cells, and triggering the effector functions of these armed cells at sites of infection. MHC class I molecules bind peptides that are recognized by CD8 T cells, and MHC class II molecules bind peptides that are recognized by CD4 T cells, a pattern of recognition determined by specific binding of the CD8 or CD4 molecules to the respective MHC molecules (see Section 4-18). The importance of this specificity of recognition lies in the different distributions of MHC class I and class II molecules on cells throughout the body. Nearly all somatic cells (except red blood cells) express MHC class I molecules. Consequently, the CD8 T cell is primarily responsible for pathogen surveillance and cytolysis of somatic cells. Also called cytotoxic T cells, their function is to kill the cells they recognize. CD8 T cells are therefore an important mechanism in eliminating sources of new viral particles and bacteria that live only in the cytosol, and thus freeing the host from infection.

By contrast, MHC class II molecules are expressed primarily only on cells of the immune system, and particularly by dendritic cells, macrophages, and B cells. Thymic cortical epithelial cells and activated, but not naive, T cells can express MHC class II molecules, which can also be induced on many cells in response to the cytokine IFN-γ. Thus, CD4 T cells can recognize their cognate antigens during their development in the thymus, on a limited set of ‘professional’ antigen-presenting cells, and on other somatic cells under specific inflammatory conditions. Effector CD4 T cells comprise several subsets with different activities that help eliminate the pathogens. Importantly, naive CD8 and CD4 T cells can become armed effector cells only after encountering their cognate antigen once it has been processed and presented by activated dendritic cells.

Unfortunately the most recent review specialized on this topic (I found) dates back to 2004, and it's pretty confusingly written, IMHO. The general gist of it appears to be that T cells can act as APC cells under some conditions (aka T-APC) and it was generally thought that this serves a down-regulatory function for T cells, e.g.

There is considerable evidence, dating as far back as 1978, in support of the notion that human activated T cells can function as APC (so-called T-APC) and thereby affect the activities of other T cells. [...]

Most reports show that MHC class II–mediated antigen presentation by T-APCs provides downregulatory signals by inducing either apoptosis or clonal anergy in activated T cells or cytotoxicity in resting T cells. This T-T presentation-induced anergy does not appear to result from TCR ligation in the absence of costimulatory molecules, because activated T cells themselves express CD80 or CD86.

More recent work has found that trogocytosis is possible between T cells, i.e. they can pass each other peptide-bound MHC. In particular trogocytosis explains some mysteries in this area, such as how mouse CD8 T cells, which cannot express the MHC-II gene, themselves actually acquire such receptors on their surface.

One such recent paper proposes that such T-T interactions differentiate CD4 T cells into regulatory ones vs Th17 pro-inflammatory ones: 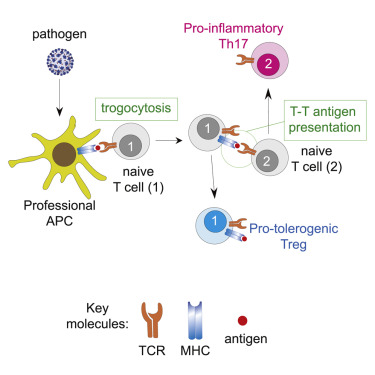 The introductory section of this 2021 paper contains a useful minireview of the directions of research (some of them being apparently somewhat contradictory to each other, if more specific conditions of the experiments aren't taken into account)

Another important mechanism of intercellular communication within the immune system is trogocytosis (Joly and Hudrisier, 2003), where T cells and natural killer (NK) cells acquire micrometer-sized fragments of the APC membrane (Carlin et al., 2001; Vanherberghen et al., 2004). These fragments can contain immune-modulating membrane receptors such as killer inhibitory receptors and major histocompatibility complex (MHC) class I and II complexes. Previously it was shown that MHC-II vesicles are released by APCs and acquired by responding T cells (Arnold and Mannie, 1999; Patel et al., 1999). T cells also acquire peptide MHC (pMHC) complexes at the IS [immunological synapse] via a process that requires T cell receptor (TCR) internalization and TCR signaling (Huang et al., 1999; Hudrisier et al., 2001). In addition, they acquire CD80 and CD86, ligands of the co-stimulatory receptor CD28 (Hwang et al., 2000; Sabzevari et al., 2001). This could convert T cells into APCs. Both CD8 T cell-dendritic cell (DC) interactions and secondary T cell-T cell interactions are required to generate protective CD8 T cells (Gérard et al., 2013), and CD8 recall responses depend on CD8 T cells taking up MHC-II from DCs to present it to CD4 T cells and obtain their help (Romagnoli et al., 2013). In contrast, other results have suggested that pMHC acquisition by T cells may play an inhibitory role (Dhainaut and Moser, 2014). For instance, T cell antigen presentation to other T cells has been associated with the induction of anergy, apoptosis, and even tolerance (Chai et al., 1998; Mannie et al., 1996), and may represent a mechanism to limit clonal expansion (Tsang et al., 2003).

I believe in the article you provided it is stated that the function of MHC class II molecules on activated CD4+ T cells is still unclear. It is believed that these MHC class II molecules-presenting T cells have potential ability to act as antigen presenting cells and induce immune response by activating other T cells. They are also capable of inducing down-regulatory signals for immune response by inducing anergy in activated T cells and cytotoxic resting T cells. In addition, they have also been reported to transduce intracellular signals into T lymphocytes.

Not the answer you're looking for? Browse other questions tagged immunology antibody antigen or ask your own question.

1
What attracts cells to: pathogens, professional antigen-presenting cells, and cells with an antigen on its MHC-1 protein?
7
MHC restricted peptide
2
peptide MHC microarray
6
How is a T lymphocyte specific to an antigen but not specific to an epitope?
0
Do there exist T helper memory cells?
2
What do we mean by MHC molecule diversity? Does each human have a variety of MHC molecule isoforms?
1
Why are superantigens not "MHC-restricted", and what's the significance?
5
Fate of antigen-presenting cells after antigen presentation to Helper T cells