Which fly is this?

This picture was taken in the Brazilian Amazon, upper Negro River, at daytime. The fly, about 1 cm long (maybe a little more) was flying next to us, as if to drink sweat. It finally landed on my friend's arm and I photographed it. Can anyone identify it, at least at family level? 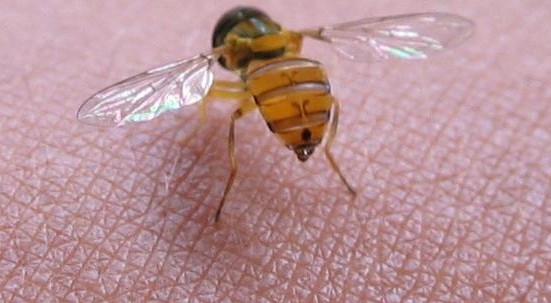 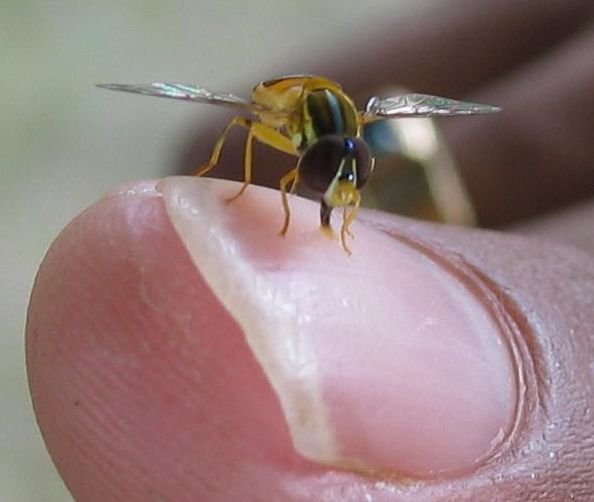 My hunch is that it's a hoverfly (family Syrphidae).

Here is an example picture of a somewhat-morphologically similar species (North American species, but whose genus is found in the neotropics): 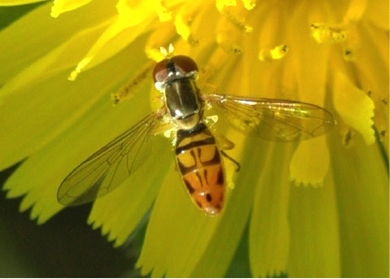 Hoverflies are found all over the world and often demonstrate bright (often yellow) coloration. Usually, the yellow alternates with black, and there are in fact a number of bee mimics! Their sizes range quite drastically, too: 0.5-3cm [Source: Ohio State Extension].

The give-away that it's a fly (i.e., order Diptera) is the fact that it only has one pair of prominent wings. [Source: Ohio State Extension]

One of the tell-tale signs to differentiate Syrphidae from other flies is the presence of a seemingly extra vein in its wing. This is actually a false (or "spurious") vein that doesn't connect on both ends, and it parallels the 4th longitudinal vein. [Source: Britannica]. 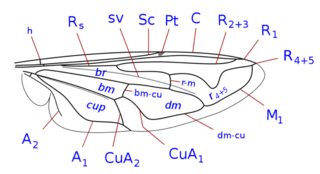 The image in your photo does not show the wing very clearly, but I can at least convince myself something similar to the SV is somewhat visible in your specimen's left wing: 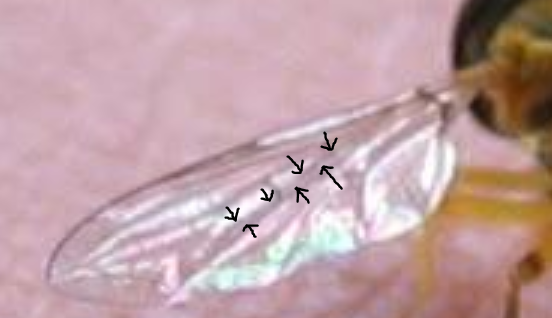 I've had many experiences of hoverflies lingering around people and following us along even as we walked through the forest for quite some distance. I think they may be attracted to bright clothing as they are very important flower pollinators.

I'm no expert in hoverflies, so my search ends here. However, if this is in fact a hoverfly, it turns out you can find online access to Thompson's (1999) "A key to the genera of the flower flies (Diptera: Syrphidae) of the Neotropical Region including descriptions of new genera and species and a glossary of taxonomic terms used" which may be of use to narrow down to a more specific taxa.

Thompson, F.C., 1999. A key to the genera of the flower flies (Diptera: Syrphidae) of the Neotropical Region including descriptions of new genera and species and a glossary of taxonomic terms used. Contributions, Ent. International.

I've actually grown fairly confident that I actually came to the correct genus in my example picture above. Toxomerus is found in North and South America, with known species in the neotropics. According to Wikipedia and inaturalist, this genus is distinguished by 1) relatively small size (6-9mm) -- check --, 2) unique abdomen markings -- check --, and 3) a posterior triangular indentation of their eye -- we can't see this in either picture.

I'm still uncertain about species, but G.F.G. Miranda provides a list of 29 species found in the Brazilian Amazon (sourced from Macquart 1855). [Bourges & couri (2009) apparently revised these species, but I can't gain access to their publication]. 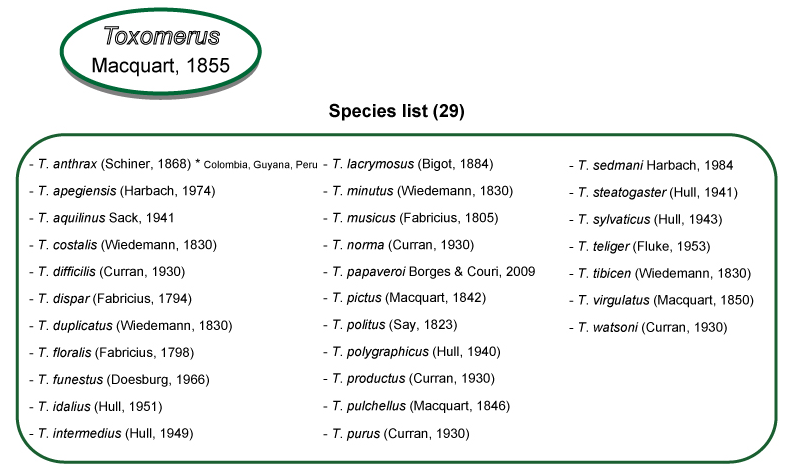 Of these, non-reputable pictures of T. floralis and T. watsoni (e.g., here) seem most similar. However, due to the lack of reputability of the sources I could find (and lack of sources for most other species listed), I don't feel confident narrowing for you at this time.

Not the answer you're looking for? Browse other questions tagged species-identification entomology diptera or ask your own question.

4
What is this insect wing, based on its vein pattern?

7
Identification of this fly?
6
Identify this large (swamp) fly?
6
What kind of a fly is this?
4
What Type of fly is this? its huge
1
What species is this fly?