Are there any motile plants?

There are numerous examples of sessile animals (sponges, barnacles etc.) but are there any examples of motile plants? If not, why not? Surely mobility would have conferred an evolutionary advantage to some plant species. I am specifically thinking of locomotion here.

It depends how you define locomotion.

If you take it to mean moving from one place to another, then yes, almost all plants do this at some stage during their life cycle. Primarily seeds and pollen move around, and generally they do so by harnessing either natural forces like wind and rain, or by manipulating animals to do the leg-work, e.g.:

If you take it to mean moving around under ones own propulsion, then yes, some plants do this. The example that springs to mind is the gametophyte generation of ferns: 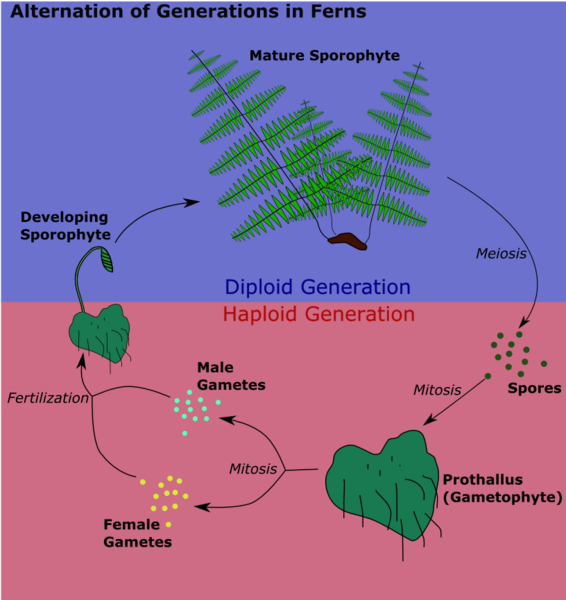 The prothallus (i.e. the gametophyte) has rhizoids on the underside and uses them to slide around and find some space in which to start the next generation. I have seen this happen when fern spores are germinated on agar - when they reach the tiny prothallus stage, they start sliding around to avoid overlapping with one another. I can't find any references for this, but I'll keep looking.

Another example of self-directed locomotion in plants is the motile sperm of bryophytes. The male sex cells have flagella, which they use to propel themselves through water to the female sex cells (reviewed by Renzaglia & Garbary 2001).

Many plants crawl by sending out ground vines and replant themselves in neighboring positions. But that's not what you are asking I think.

I don't know if there are any land dwelling leaf bearing plant forms that move.

In the water most chlorophyll bearing algae have flagellae and can migrate through the water.

Plant movement can be measured by a crescograph. This mov is not only due to plant growth but also as response to stimuli.

Talking of growth itself roots frequently go around a rock while the grow, and plants lean towards a light source when kept in shade.

Creepers and climbers do display a kind of locomotion of the part if not the whole, Partial motility is available to leaves of certain plants(They clasp shut in night)and flowers (Sunflower).The few carnivores we know add to the example.

4
Plant a whole fruit or only seeds?
4
Is there a database of pollen-seed distances across plant species?
3
Have there been any studies on 'surf balls'? (not related to surfing)
-2
Why are plants classified in living things?

11
Why are there so many medicinal plants?
15
Is there a fundamental reason that plants cannot fix their own nitrogen?
2
Relationship between leaf structure and Photosynthesis rate
6
Can plant fruit and seeds be albino like animals?
1
Why do plants flap their leaves?
2
Why are some plants naturally yellow?