The Johnson vaccine, unlike the RNA vaccines from Pfizer & Moderna, uses a vector containing DNA encoding for the SARS-COV-2 spike protein. This vector DNA needs to enter the cell, allowing for transcription and translation into viral spike proteins to occur (Fig. 1). These spike proteins are then exposed on the cell surface by the host cells, thereby exposing the antigenic epitopes, creating the immune response.

Basically, this turns the immune cells against their own host, because they are expressing foreign proteins on the cell surface. In effect, I presume, those host cells are subsequently destroyed by the immune system.

Now I was wondering if there has been any research done revealing the consequences of this auto-immune response. In particular how long does it take to get rid of all the transfected cells (or 'vaccinated cells' as they tend to be called) and what is the extent (volume/area affected) of transfected cells? Basically you are genetically altering the host's cells that are subsequently attacked by the immune system. So I am basically interested in the pharmacokinetics of the vaccine I guess.

This safety report from EMA says that in 1 animal (from how many?) there was still genetic material after 180 days to be detected. However, the report says nothing about the extent of transfected cells nor anything about the auto-immune damage after the host attacks its own cells. No references are to be found either; it all seems to be about internal safety studies.

In retrospect I'd rather not have had the Janssen vaccine; I bet mRNA vaccines are a lot more instable, guaranteeing safe removal of the foreign genetic material.

Anyway, I'm drifting... In short, (1) how long does it take to clear all signs of foreign DNA from the host after Janssen, and (2) what is the extent of the cells that are transfected and subsequently attacked and damaged/killed by the host? 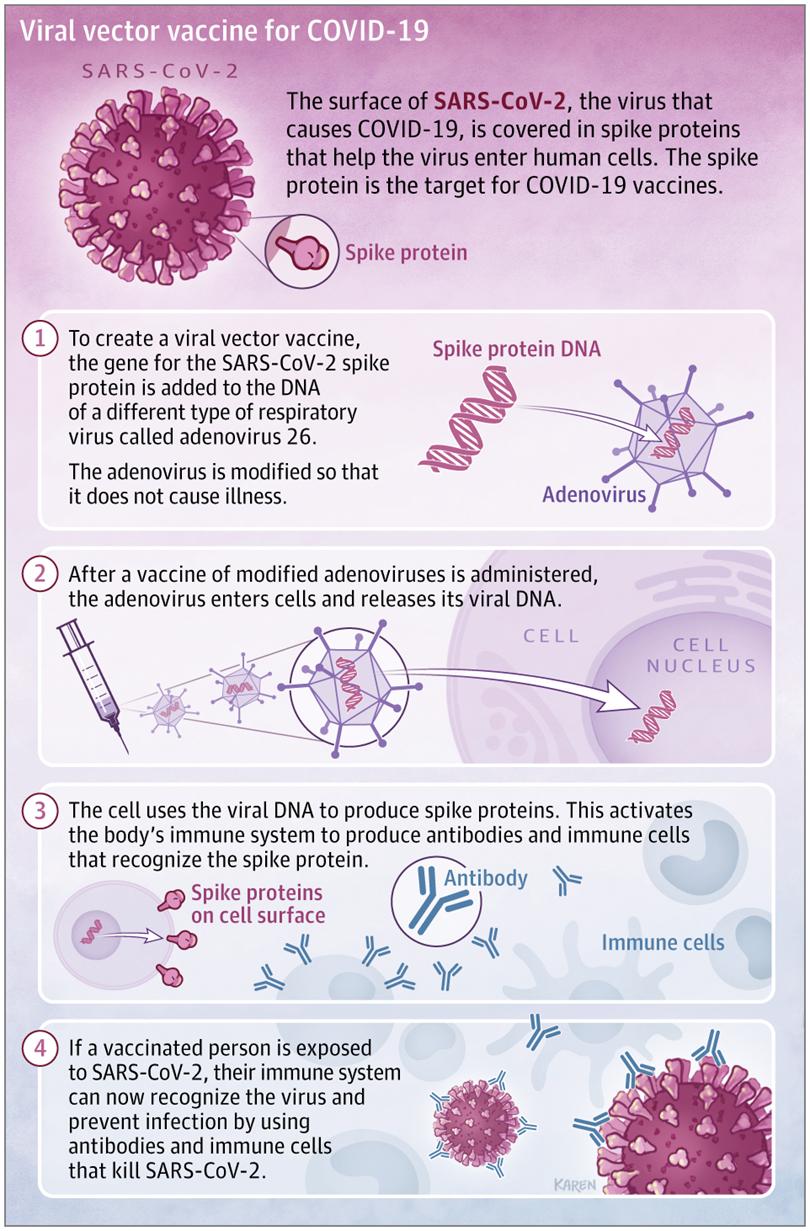 pathology coronavirus pharmacokinetics autoimmune
Share
Improve this question
edited May 23 '21 at 19:33
AliceD
asked May 20 '21 at 12:29

Both the AstraZeneca (AZ) and Janssen (J) vaccines against SARS-CoV-2 work by using what is known as a viral vector to generate an immune response. In both cases these vaccines use an Adenovirus as the vector (vector in this case means "carrier").

Adenoviruses are a family of double-stranded DNA viruses, most commonly known for being one of the causes of the illness known as the "common cold". There are about 88 human serotypes (how people's bodies react to the virus, different serotypes may not cross-protect by raising an immune response) of the virus divided over the seven species: Adenoviruses A-G. Overall there are about 50 species from a wide range of animals. Because of the diversity and the abundance of the "common cold" most people will have some immune response to at least some of the human adenoviruses.

Adenoviruses are good vectors for vaccines and for other therapeutic uses such as oncolytic viral therapy because the genomes are easily modified and can be made replication incompetent very easily. To do this essential replication genes are removed and the viruses are replicated in cells that provide the essential proteins for the virus to complete its life cycle, so that you get a viral particle that no longer contains the full genome. These viruses are also tolerant of additions to the genome so they can be used to produce proteins that are not normally found in an adenovirus.

On the other hand the adenovirus component of these vectors can cause its own immune response, lowering effectiveness of the immune response to subsequent vaccines developed using the same or a similar sero-type virus.

The AZ vaccine is based on a chimpanzee adenovirus. The J vaccine on the other hand is based off serotype 26 (Ad26) of the human adenoviruses. In both cases the adenovirus is rendered replication incompetent by removal of essential replication genes.

For adenoviruses to work as vaccines they need to invade a cell and then insert their DNA into the nucleus (as seen in the diagram from OP), where cellular mechanisms produce lots of mRNA copies of the gene(s) and concomitantly produce proteins from these mRNA. These proteins are then translocated to the surface of the cell (this is a natural process).

However, in the process the viral DNAs and proteins are recognized by the cell as non self and trigger the innate immune system causing antigen presentation and activation of the adaptive immune system. This whole process is a natural response of the body to infection and does not result in "self recognition", so there is no auto-immune response to the cellular proteins.

Both the AZ vaccine and the J vaccine are administered intra-muscularly, which is very typical for vaccines. Intra-muscular injection is a good site for injection because it can tolerate a big volume and has a relatively high blood flow (both compared to sub-cutaneous (sub-skin)). However, once injected the virus doesn't necessarily stay in the muscle, it can travel in the blood and a portion will end up in other locations, particularly the liver and alveoli of the lung (places where there is a big blood supply and lots of small blood vessels). The adenovirus can infect any cell that expresses the cellular receptor called Coxsackievirus and Adenovirus Receptor (CAR) on its surface, which includes immune cells. There's a fairly comprehensive review of all the mechanisms and cell types here, but it is in written for the scientist. Here's a suitable quote about cell types:

How long the viral genome persists depends on the paper, but not many people have looked. The data I could find seem to indicate that most protein expression is lost after about 3 weeks, but it may persist longer. e.g.:

Although Ag expression could no longer be detected 3 wk after immunization, examination of Ag presentation within the draining lymph nodes demonstrated that APCs were loaded with Ag peptide for at least 40 days postimmunization, suggesting that Ag remains available to the system for a prolonged period, although the exact source of this Ag remains to be determined.

However, the genomes seem to persist for a very long time, perhaps as much as a year or more:

By days 30 and 90, vector sequences remained detectable in most animals in these tissues but gradually declined 102 to 103-fold. After 1 year, relative copy numbers in liver and the injected muscles were comparable with those seen on day 90, whereas a further decline was seen in spleens.

Note that both of the quotes above are not about either the Janssen or AZ vaccines, but about adenovirus vaccines in general, and several Ad vectors were tested in both. It is highly likely that the AZ and J vaccines will have similar data.

Edited to add: I don't know why the DNA persists for so long, but it does not integrate into our genome. It seems that most replication deficient adenoviruses lack the E1A gene, which allows induction of the cell cycle and frees up resources for viral replication. However, the genes involved in viral DNA replication are E2A and E2B, so are not included in the deletion.

TLDR: Viral genome can persist for a very long time, but protein expression does not - possibly because the immune system deals with it quickly after a few weeks (effective vaccination...). The vectors can reach and infect many tissues in the body, particularly ones with high blood flow and lots of small blood vessels such as lungs and liver.

Not the answer you're looking for? Browse other questions tagged pathology coronavirus pharmacokinetics autoimmune or ask your own question.

9
How does sunlight affect the longevity of SARS-CoV-2 on surface?
18
Do mRNA vaccines cause transfected cells to be killed by cytotoxic T cells?
2
SARS-CoV-2 : does vaccination provide a better immunity than being sick and recover?
6
Is the covid-19 vaccine-induced copy of the protein spike also damaging cells?
11
Viral vector vaccines - why doesn't the viral vector get attacked by the innate immune system?