How can we know which alleles are together on a chromosome?

This illustration says that if the two homozygotes pr+ pr+ vg+ vg+ and pr pr vg vg are crossed to produce a heterozygous offspring (pr+ pr vg+ vg), then:

this cross gives us exactly what we need to observe recombination: a fly that's heterozygous for the purple and vestigial genes, in which we know clearly which alleles are together on a single chromosome. 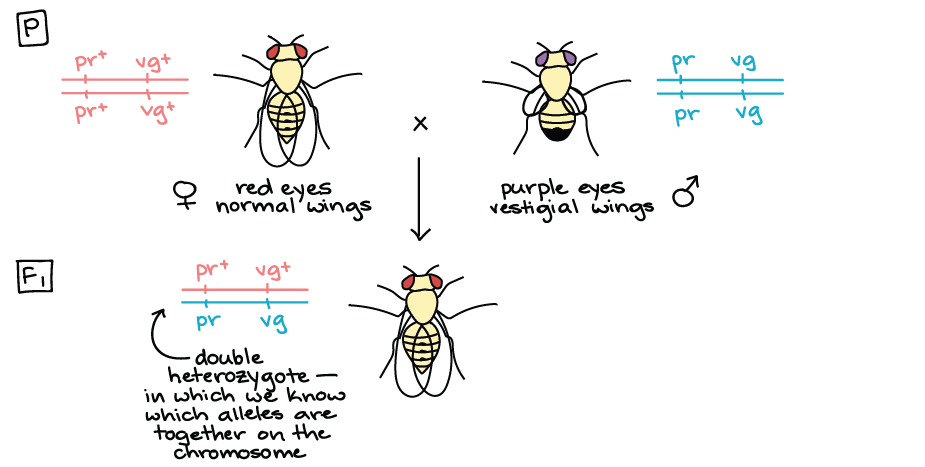 I can't see the logic of this: surely if there were four chromosomes involved instead of two, wouldn't we get the same result via independent assortment?

I'm sure I've got my own logic wrong - can anyone enlighten me?

(moved from comments)
We don't know from the pictured cross that the genes are linked. However, IF they are linked, we know from that cross which alleles are together on a single chromosome.

", if indeed they are linked."

added to the end of

"this cross gives us exactly what we need to observe recombination: a fly that's heterozygous for the purple and vestigial genes, in which we know clearly which alleles are together on a single chromosome."

It's the further crosses of the F1 offspring that tell us if the genes are linked and if so, how closely. The original cross is necessary but not sufficient to determine this.

How can we know which alleles are together on a chromosome?

is not quite the same as the question at the bottom of the body of your post:

These questions are different in two ways that matter: (1) the second question is asking about a single crossing, the one shown in the diagram, and (2) the second question asks about knowing if the genes are on the same chromosome or not, whereas the first asks if the genes (I presume, it says "alleles") are "together on a chromosome" (depending on how you take that phrase).

On difference (2): I would take the genes being "together on a chromosome" to mean "linked to each other", that is close enough to each other on a single type of chromosome to tend to stay together during recombination events. Maybe you meant "on the same chromosome", but that is, importantly, a different thing. Recombination testing cannot tell you if genes are on the same or different chromosomes; it can only tell you if they are on the same chromosomes and are close enough together that recombination will not sort them randomly, but rather tend to sort them together. If they are far apart, the genes will stay together or be separated by recombination with equal probability, which is the result that also happens when genes are on different chromosomes.

So, the full procedure that is described on the Khan Academy page will show how much recombination you get in the fly grand-offspring. If you get few recombinant forms compared to the number of parental forms, then the genes are close together on the same chromosome. If you get equal numbers of recombinant and parental forms, it indicates that is not the case, and therefore the genes are either on separate chromosomes or so far away on one chromosome that recombination has full effect and randomly separates them.

Not the answer you're looking for? Browse other questions tagged genetics homework recombination genetic-linkage or ask your own question.

0
Possible Genotypes — Linked Genes
3
How does chromosome cross-over occur?
0
How to decide if genes are linked in an unordered mapping problem?
5
How do I know which alleles the parents have?
2
Simple Mendelian sex-linked chromosome fruit fly question
0
What is the relationship between independent assortment and cross over?
1
MCQ - Independent assortment or Incomplete linkage
1
Linked genes outcomes in offspring
2
Number of homozygous recessive offspring