Why are microtubules absent in and around the nucleus? 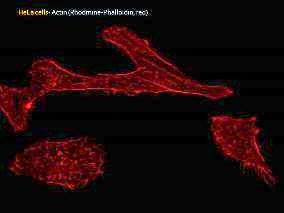 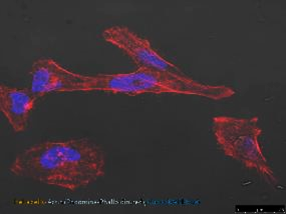 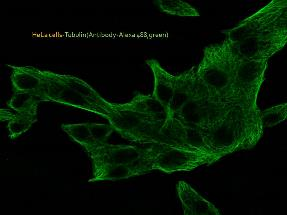 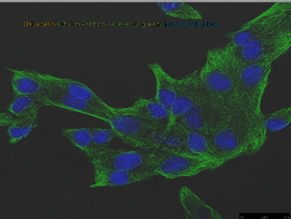 I was going through fluorescence microscopy and found these four images. The top left corner shows the actin cytoskeleton (rhodamin phalloidin) and the bottom left image shows the microtubule cytoskeleton (Alexa 488). One thing I noticed is that the actin cytoskeleton is continuous throughout the cell as seen in the top right image (rhodamin phalloidin + DAPI composite), but in case of the microtubules, the nuclear position and microtubule localization seem to be mutually exclusive. I can't seem to figure out why this might be the case, and it definitely does not look like a coincidence.

cell-biology fluorescent-microscopy cytoskeleton
Share
Improve this question
asked May 23 at 4:11

tl;dr Cells are 3D and the cytoskeleton does not exist within the nucleus.

There are several things you have to be aware of when looking at such pictures. Remember, you are looking at a 3D object which is not homogeneous and uniform in depth.

Shape of a plated HeLa cells

You are looking at HeLa cells. When plated like in your case, they adhere to the plate and make a generally thin, 2D-ish shape with lamellipodia (the extruded parts that look like they are grasping the plate on the sides of each cell). The nucleus is the most prominent vertically bulging part of the cell - the nucleus takes up most of the depth of the cell and there is little space around it. You have to appreciate the vertical dimension of the cell around the nucleus especially. The shape is a little like an egg cooked sunny side up; the yolk makes a bulge and the egg white is thinner around the yolk and there is little space for large filaments like microtubules. Remember, cytoskeletal filaments are so in size: small (actin) filaments < intermediate filaments < microtubules. This is exactly why you see more actin, a little less intermediate filaments, and even fewer microtubules exactly on top or below the nucleus in these 2D plated cells. Also, please remember that these cells are not representative of most cells.

The nucleus is a separate compartment

The nucleus is also a separate compartment, within which the actin and microtubule cytoskeleton system do not exist. The nucleus performs its own structure-keeping in the form of the nuclear lamina, which is composed of protein meshes that sit on the inner membrane of the nucleus. 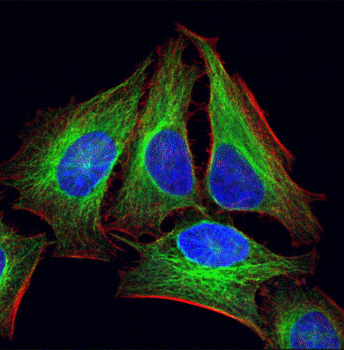 Other images for a more wholesome appreciation of the cytoskeleton. 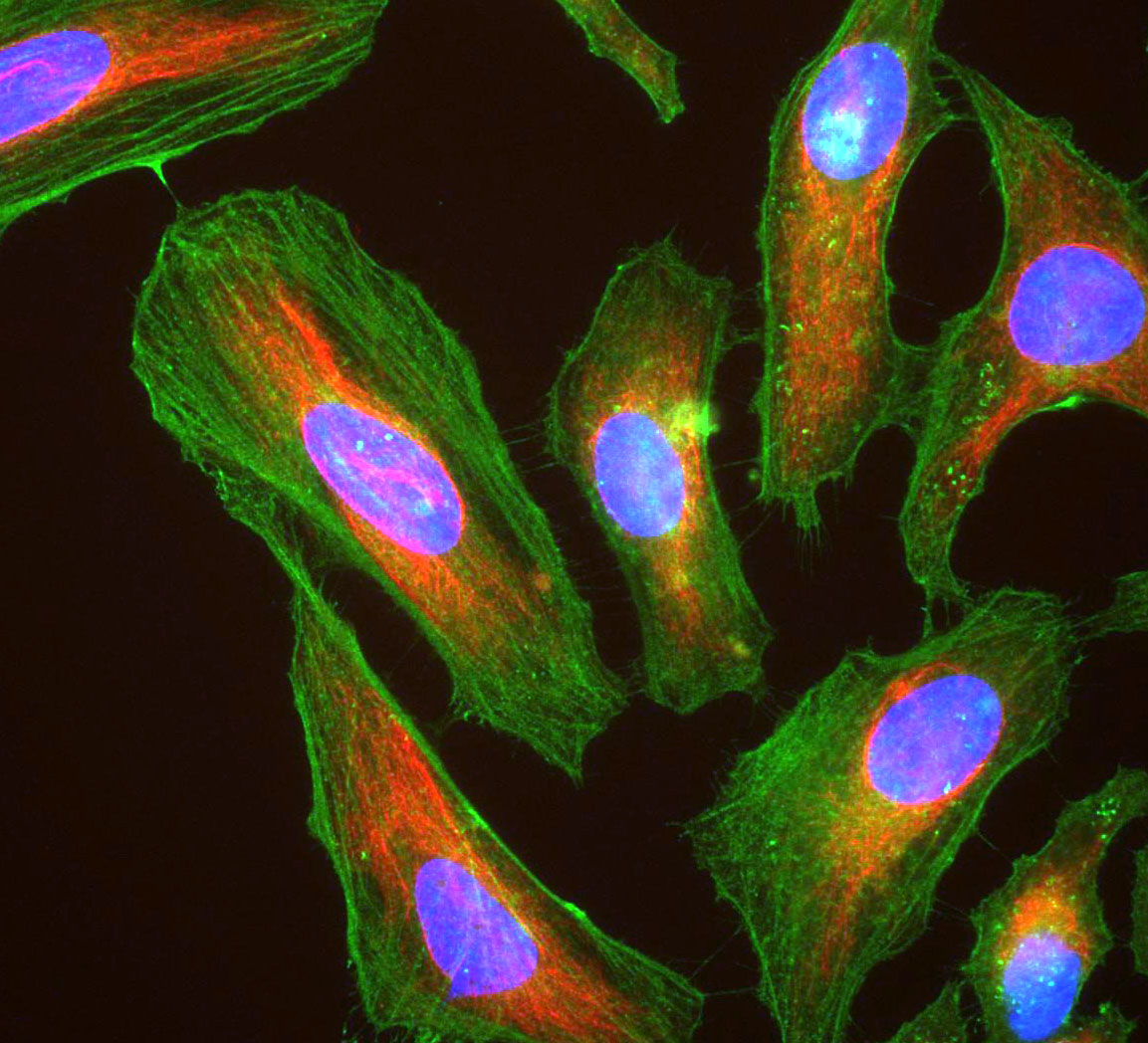 And now here you can see a microtubule stain in HeLa cells, in pink. Notice that some microtubules do actually make it around and across the nucleus. 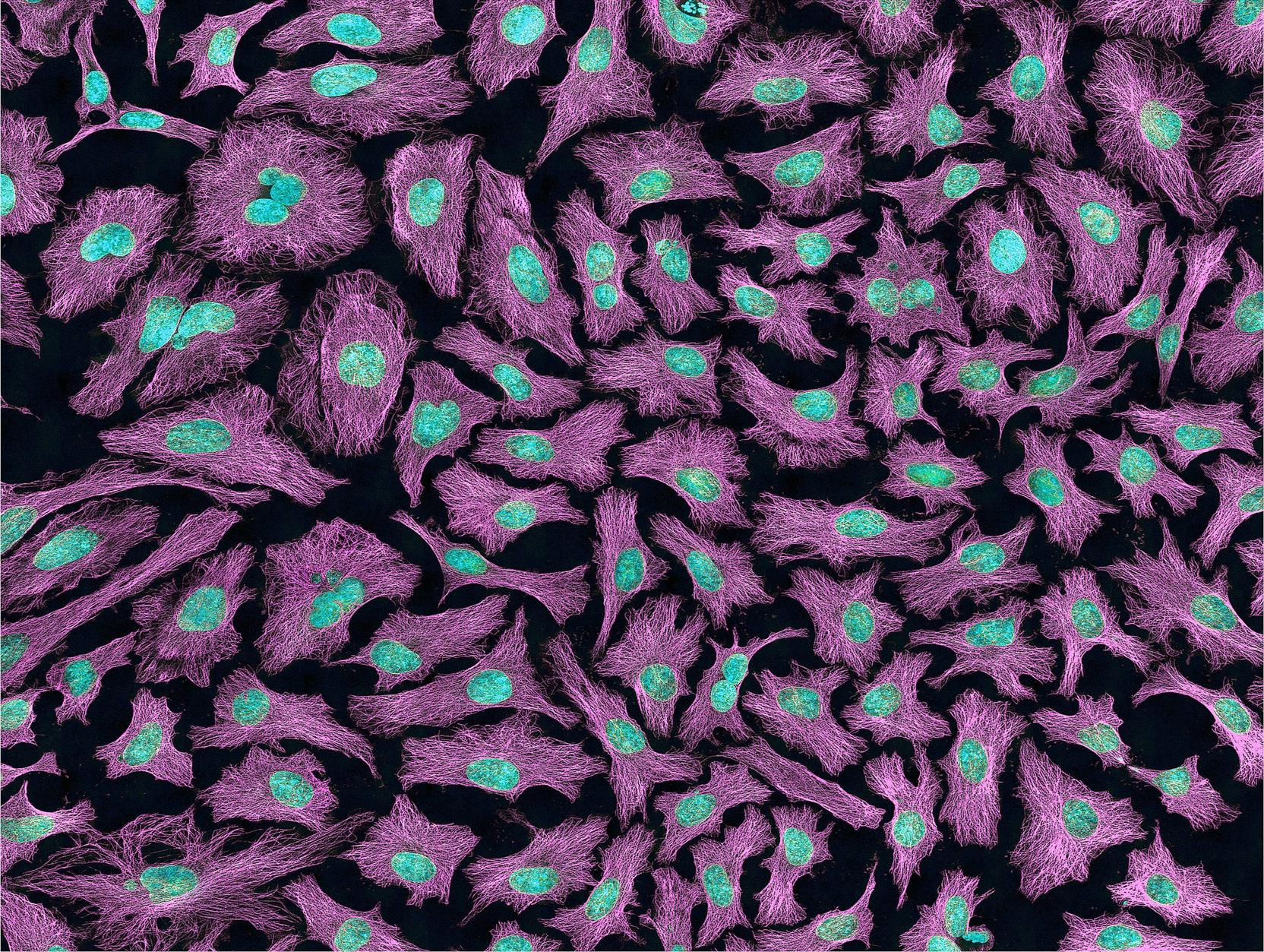 @MasterOfGalaxy one of the roles of the microtubule cytoskeleton is the mechanical support of the cell. The nucleus has its own specific skeleton. The nuclear lamina is a proteinaceous meshwork located on the nucleoplasmic side of the inner nuclear membrane. On the other hand, microtubule filaments allow for water and minerals transport to organelles including the nucleus from exoplasmic surface while the nucleus has not independent accessibility to exoplasmic leaflet because of its topological position. There is no function for microtubules in the nucleus.

Not the answer you're looking for? Browse other questions tagged cell-biology fluorescent-microscopy cytoskeleton or ask your own question.

1
Why can't cell division happen the other way around?
8
Are there human cells, apart from red blood cells and platelets, without a nucleus?
2
How does the drug MBC effect the depolymerization of microtubules in eukaryotic cells?
2
Why do sperm have centrioles and do female eggs cells even have centrioles?
4
Are centrioles really absent in human neurons?