Is this a hornet?

I live on the 2nd floor of an old apartment building in Vancouver BC (Canada). A couple of years ago we had an issue with a hornets nest that was difficult to remove because of its location. They managed to find a way into the actual apartment despite window screens etc. We thought the issue had been resolved, but today I saw this flying around outside my window: 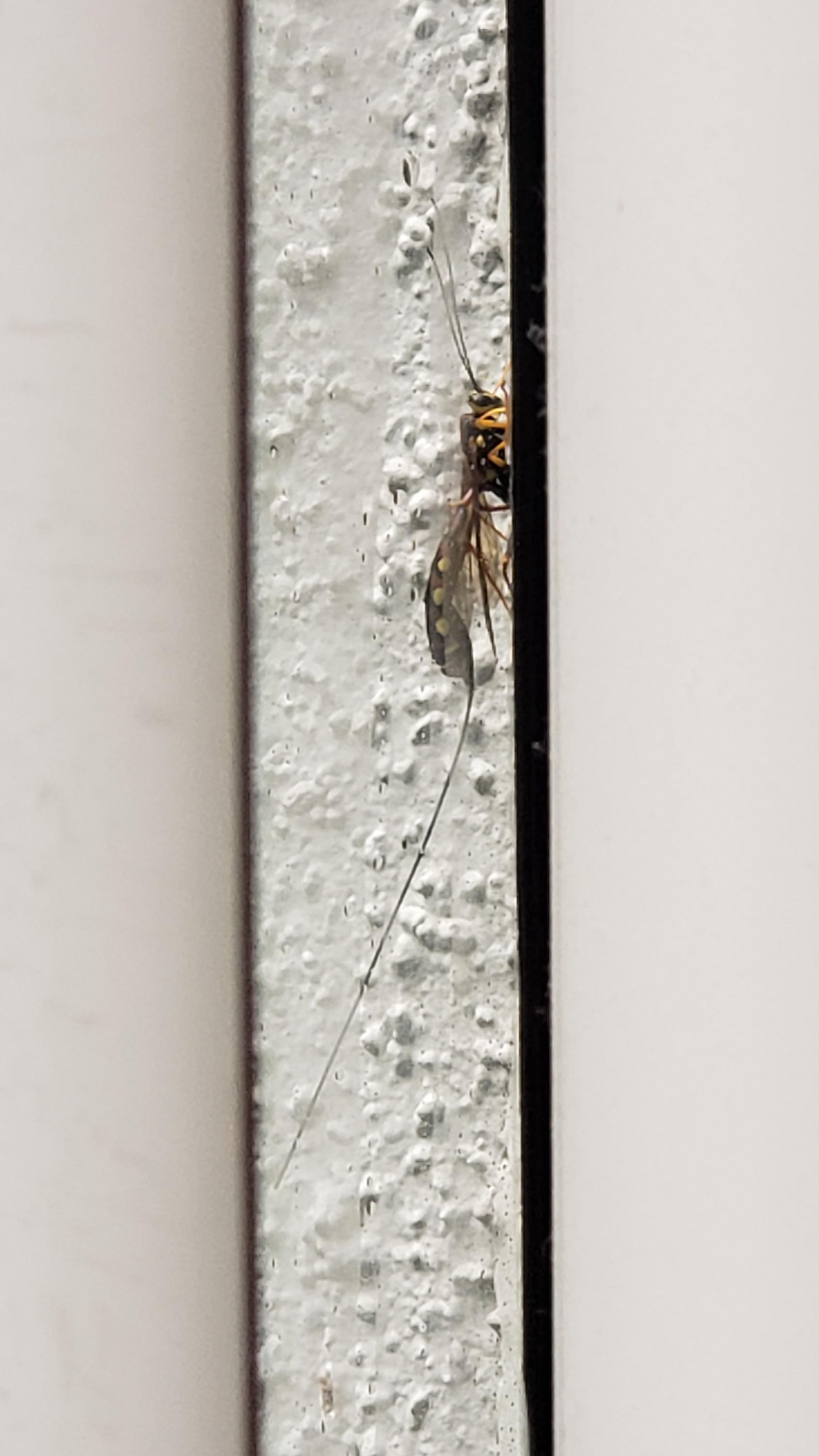 The main body was maybe 2-3 inches, but it had a very long "tail" or I guess what might be stinger. Never seen anything that large before. This insect was much larger than the hornets from previous years (which were at most 1 inch in length)

What type of insect is this, and should I be concerned?

species-identification entomology
Share
Improve this question
edited May 31, 2021 at 22:15

This is not a hornet, this is an Ichneumonidea wasp, which is a superfamily of parasitoid wasps with about 100,000 species. I would go so far as to think it is within the Ichneumonidae family and think that it is probably Rhyssa lineolata, though I am certainly no entomologist of any sort. Note that because there are so many species, it might be quite hard to identify, though this is a large one, and has the very long ovipositor so that should narrow it down for someone more skilled at ID than me. Most Ichneumonid wasps are much smaller and lack the long ovipositor.

All parasitoid wasps lay eggs on or inside another species of insect or arachnid, where the egg hatches and uses the host species as food for its larval development. These sorts of wasps usually parasitise larvae of wood-burrowing species, so they use the long ovipositor to drill into the wood and deposit their egg(s). There's some footage and images of this for a Rhyssa species on Wikipedia

I don't think this species will sting as the ovipositor is too fragile and long to be easily manipulated to sting someone. These sorts of ichneumonids usually are looking for dead wood with grubs in it, so it could potentially indicate that you have some grubs in wood in/around your house, but it is much more likely that there is a tree with a dead branch nearby. Apparently they are also attracted to fresh sawdust (thanks to comment from @polypipewrangler)

As far as I know, these are solitary wasps - they don't build nests, so you won't see more than 1 or 2 at a time.

3
What species of insect is this, spotted south-east of Berlin? Habitat: forest near lake shore, Size: body 40mm, w/o antennas and ovipositor

9
What wasp like insect breeds in clay pots with dead spiders?
0
Is it possible to build a hive for bumblebee or hornet
4
Need help identifying this wasp/hornet
0
What color is the hemolymph of the Japanese giant hornet?
2
What does the hornet do on the ivy blossoms?
1
Is this an asian hornet
2
What insect is this? Found this at home, India
2
What does a hornet nest foundress feed on?
0
Identification - hornet
1
Which hornet-like insect is this?