What species is the ancestor of the African Basenji dog?

I thought domestic dogs were descended from the wolf (Canis lupus).

However, this article suggests the African Basenji is one of the oldest dog breeds.

But the wolf is only marginally native to Africa (I think). As far as I know, wolves ranged into North Africa in historic times. But I believe the Basenji originated in more southern regions.

Is the Basenji's ancestor indeed the wolf, or is it some other species?

tl;dr although basenjis are an "ancient" dog lineage and although they live in an area that has never been part of wolves' geographic range, they are thought (like all other dogs) to have originated in Asia by splitting off from wolves, after which their ancestors migrated to Africa sometime around 15,000 years ago.

three of the ancient breeds (Basenjis, Dingoes, and New Guinea Singing Dogs) come from regions outside the natural range of Canis lupus (the dog’s wild ancestor) and where dogs were introduced more than 10,000 y after domestication. These results demonstrate that the unifying characteristic among all genetically distinct so-called ancient breeds is a lack of recent admixture with other breeds likely facilitated by geographic and cultural isolation. Furthermore, these genetically distinct ancient breeds only appear so because of their relative isolation.

... The combination of introgression and bottlenecks suggests that basal breeds have little or no genetic connections to their ancestral populations, and that genetic distinctiveness alone cannot be used as a proxy to signify an ancient heritage.

In other words, all dogs are thought to have split off evolutionarily from wolves in Siberia around 23,000 years ago (Perri et al. 2021). The ancestors of basenjis came to central Africa [on their own or accompanying humans] sometime after that; because their ancestors were more isolated from other dog breeds, they appear to have split off from the lineage containing "modern" breeds a long time ago.

Although genome-wide analyses have estimated that a subset of ancestral dogs migrated toward the Middle East, Europe, and into Africa ~ 15,000 years ago (Wang, Zhai et al. 2016), the oldest archaeological evidence for African dogs was found in Egypt, dating ca. 6300–5600 BC (Mitchell 2015).

In other words, we don't actually know very much about how dogs got from Eurasia to Africa.) 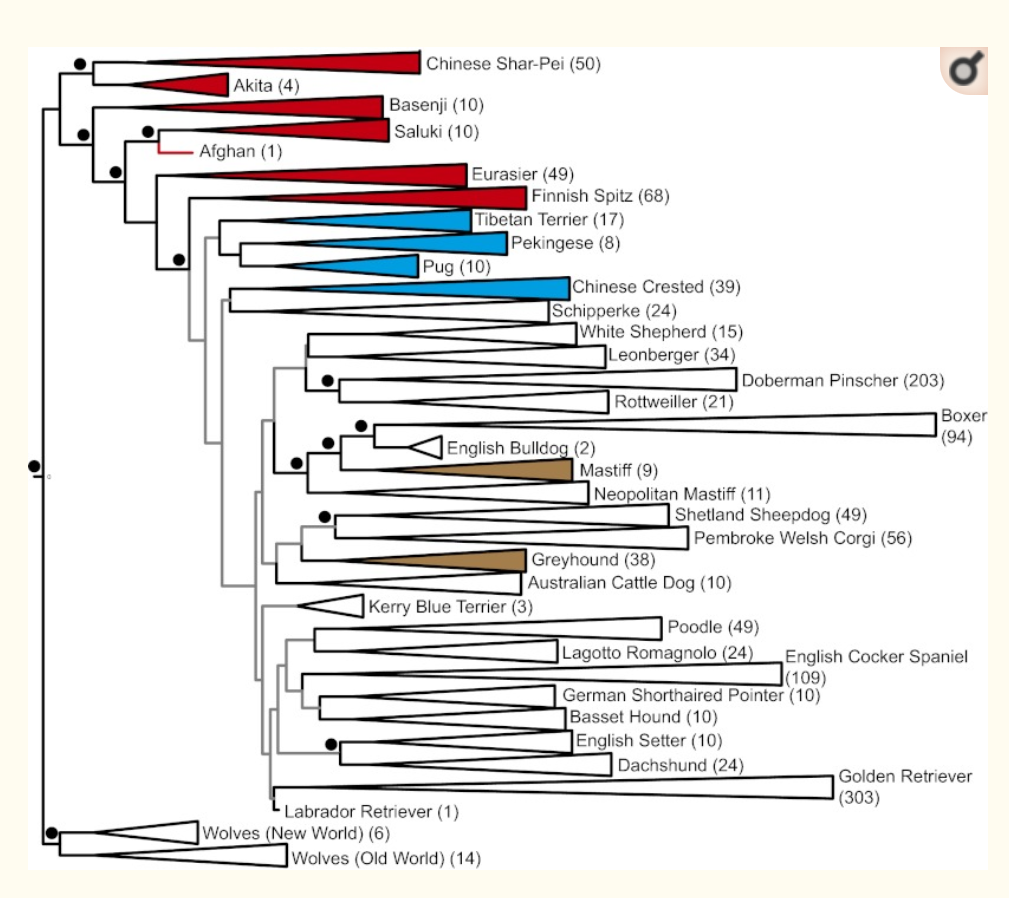 Although the paper corresponding to the news article you cite (Edwards et al. 2021) is an impressive genomic/bionformatic advance (high-quality genome of basenjis), it doesn't actually say much about the evolutionary history of basenjis.

0
When did the most recent common ancestor of all living domestic dogs live?

5
Is there a DNA test to identify dog mixes?
2
How much natural genetic variation is there between bacteria of the same species?
3
DNA replacement: new species
15
Is the size of the genome across species roughly the same?
1
Ancient DNA of ancestors or existing species?
3
What is the purpose of the “No DNA control”?