Detection of primer dimer on RT-PCR?

I usually do RT-PCR test for covid-19. Curves for Patients and Positive CTRL mostly appeared at 20 to 25 Ct. Sometimes, there are some curves that emerge at the last 5 cycles. Some argue that they are probably primer dimer and should not interpret as positive. How primer dimers would appear on the amplification graph?

This is a bit complicated from far away, but I will share a few thoughts on it. The occurence of primer dimers depends on the design of the primers (sometimes they are inevitable due to sequence limitations), but then they also show up in the negative controls.

If they are not present in the negative controls (meaning: never), I would not expect them to be present in the test reactions either. It is possible that you are getting very late unspecific DNA amplification from other sequences due to degrading etc. but this is also unlikely.

You could do a melting curve analysis to see what your product looks like. A pure product (even in the late phase of the PCR) should show up as a sharp and clearly defined peak, whereas primer dimers (and also the products of unspecific DNA amplification) have generally a much lower melting temperature and give a much broader peak. The figure (from here) illustrates this nicely. 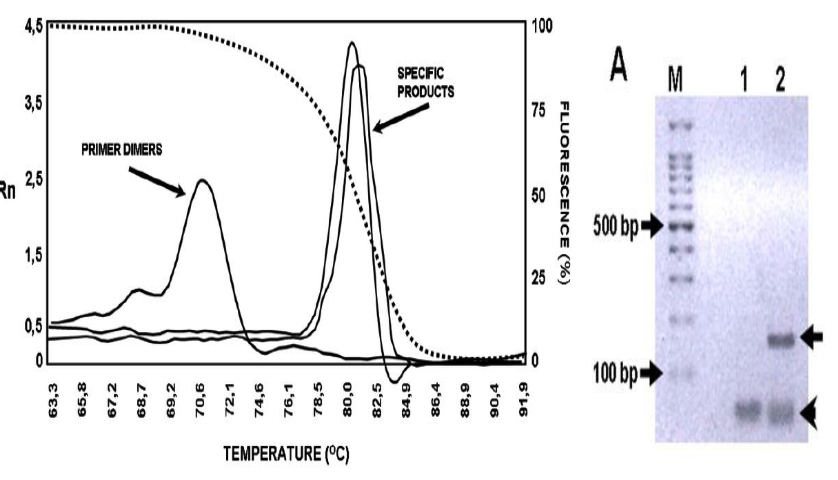 You could also run your samples on a gel after the PCR and see what the product looks like. Product gives nice and clear bands, while byproducts are smaller and more diffuse.

It is not unlikely that you either tested people who have gone through an infection with SARS-CoV-2 and have only some virus left in their body or that the sample comes from people very early in their infection, when the detectable amount of virus has just gone over the threshold for detection. Assuming that the samples have been correctly taken (which is another possibility for error), I would collect a new sample from these individuals and test them again.

Not the answer you're looking for? Browse other questions tagged pcr coronavirus primer covid or ask your own question.

5
PCR primer in highly repetitive region
7
Primer Dimer / Hairpin Algorithms
4
How does sequence independent single primer amplification work?
0
PCR efficiency or DNA yield with single primer
1
double PCR with tailed primer
0
High concentration of primer in PCR
5
Is there a biological or technical reason for a 40 Ct cutoff in nucleic acid detection assay?
0
How many non-pairing bases can a PCR primer have in directed mutagenesis?