What's the difference between Kd and IC50?

What's the difference between the equilibrium binding constant ($K_d$) and Inhibitory Concentration 50 $IC_{50}$? They both seem to mark halfway points. Is the only difference that $K_d$ refers to any binding, whereas $IC_{50}$ refers exclusively to inhibition?

$K_d$ refers to the dissociation rate at equilibrium and is calculated by $\frac{K_{on}}{K_{off}}$. This is the rate at which the peptide is bound to the target protein ($K_{on}$) divided by the rate at which the peptide unbinds or comes off the target protein ($K_{off}$). So when you look at binding curves, it's the 50% bound/unbound point on the curve (the inflection point). 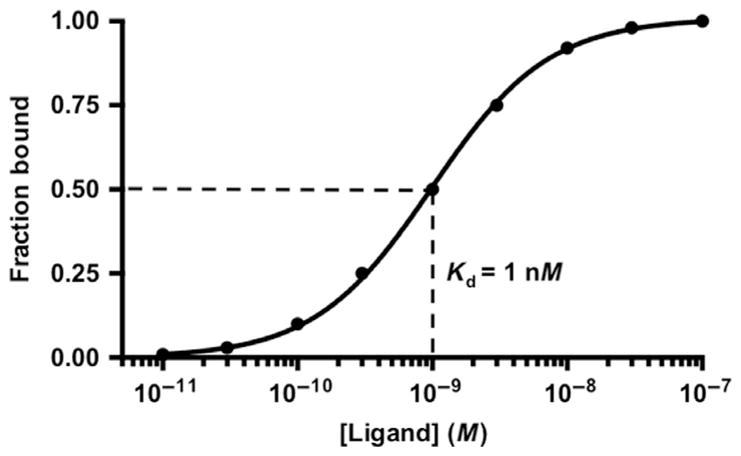 Pragmatically, $K_{d}$ values generally are considered more "constant" and vary less with changes in concentration of the target protein and peptide. They are more independent from the assay set up and type. In contrast, an $IC_{50}$ value can range depending on the assay set up (not considered constant values). For example, the $IC_{50}$ values in Fluorescence Polarization depend heavily on what "probe" molecule was used and the concentrations of the target protein and peptide.

14
Is the EC50 of an activating protein for an enzyme a good indicator for the binding affinity Kd?
4
Identifying type of inhibitor from $K_m$ and $V_{max}$

5
Simple diffusion of lipid-soluble molecules through phospholipid bilayer -- does anything get "stuck" in transit?
6
What's the difference between Ki and IC50?
2
Trimming of tRNA precursors
2
Change in synthesis rate of a molecule changes equilibrium concentration
5
Is there a protocol for freezing and thawing Bacillus subtilis cells?
5
Is there a difference in cytoplasmic pH between prokaryotes and eukaryotes?
2
Why does uncompetitive inhibition decrease the Michaelis constant?
3
What happens to Km when enzyme concentration is *very* high?