What's happening in the "C" and "T" stripes of a covid test kit?

I have a COVID home test kit which produces C and T (control and test) stripes when the solution is applied to the strip. Something similar happens in pregnancy test kits.

I understand the purpose of a control and test response, but what is the difference in mechanism?

In a negative test, why will C show up even though T does not?

In a failed test, why will C not show up even though T does?

Also, these stripes are somewhat distant from the spot at which the solution is applied. Why the separation?

This is a lateral flow assay. 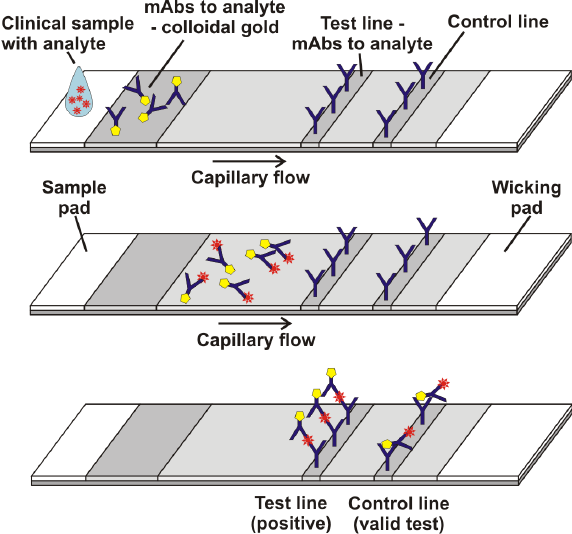 A sample is applied at one end of the strip and flows across to the other side by capillary action. It first encounters antibodies against the target antigen and which are conjugated to some reporter (in the image above, the reporter is colloidal gold). When the sample contacts these antibodies, they too will begin to move across the test strip. If the target antigen is present in the sample, in your case COVID, these antibodies will bind to it.

In a negative test, the lack of antigen means the reporter antibodies will not stop moving at the test line and will only be bound at the control line.

There are several possible reasons for a failed test (when no lines are visible or the test line is visible and the control line is not). Among these, it’s possible the sample has simply stopped migrating across the strip before reaching the test and/or control lines. Or it could be that the antibodies have degraded due to improper or prolonged storage such that they no longer bind properly.

Note that this answer is just a general description of a sandwich lateral flow assay. There can be variations of this procedure in specific tests.

Not the answer you're looking for? Browse other questions tagged biochemistry virology lab-techniques coronavirus methods or ask your own question.

42
How does a Coronavirus "test kit" work?
2
What's the difference between mutation and substitution rates?
0
If the covid-19 appeared once, could it reappear anytime?
0
What specific markers does a Covid-19 PCR test look for?
0
Can one derive COVID-19 risk from a cheap consumer genetic test like 23andme?
0
What is the consensus in the scientific community over COVID-19's mode of transmission?
3
The probability meaning of Covid variants
8
Do the primers used for Covid-19 test work with all new strains?