Recently the popular scientific press gave considerable publicity to three publications in Science (30th April 2021 — see below) relating to the substitution of the nucleic acid base, 2-amino adenine, for adenine in certain bacterial viruses (bacteriophages). For example Quantum Magazine:

DNA Has Four Bases. Some Viruses Swap in a Fifth.
A few decades ago, researchers found viruses that had swapped one of the four bases in their DNA for a novel fifth one. Now, in a trio of papers published in Science in April, three teams have identified dozens of other viruses that make this substitution, as well as the mechanisms that make it possible. The discoveries raise the thought-provoking possibility that this kind of fundamental genomic change could be much more widespread and important in biology than anyone imagined.

I am interested in (and my question is) how this was established experimentally, and how widespread it is in nature, but find the original papers too technical for the non-specialist. Is it possible to provide a summary explaining this, and in general terms how one would search for nucleic acid analogues in organisms?

These are listed below, with an extract from the summary of each, where I have difficulty with the technical terminology.

Notes
1 and 2. Modern methods can detect molecules in small quantities in impure mixtures
3 and 4. Often done in concert. Genes in a small viral genomes may suggest possibilities.
5. If one wishes to work on a different organism, it is then necessary to establish that the genes do encode enzymes that catalyse the synthesis of the base.
In general, a knowledge of chemistry is much more important than biology in being able to carry out this sort of work.

In this case purification is relatively easy. One can physically separate the phage particles on the basis of size etc., and then extract the DNA from the protein using standard chemical separations and break it up (hydrolyse) into individual components including bases. This was first reported in 1977 in Nature by Kirnos et al..

Cyanophage S-2L was isolated from water samples taken in the outskirts of Leningrad. It can lyse blue-green algae Synechococcus sp. 698 and S. eloniatus strains 58 and 6907 … The phage was grown on S. sp. 698 and concentrated by chromatography on DEAE-cellulose (Whatman DE-32) and purified by centrifugation in CsCl gradient.

Classically a chemist would analyse the atomic constituents and their ratio in an unknown molecule, perform partial degradation to produce known constituents, deduce a possible structure and attempt to synthesize to confirm this. The ease of identifying unknown molecules has increased over the years as the number of already identified compounds with which one can compare has increased (there had been much work done on minor bases found in transfer RNA) and the methods available have grown and become more discriminating. It is interesting that the cyanophage work was done in the former Soviet Union, where biological sciences were low in prestige and funding. Standard equipment for examining the spectral properties of compounds (the light or other electromagnetic radiation emitted or absorbed on excitation of particular chemical bonds) would be available, however. The conclusion that an unknown base was present in the DNA of this phage was almost certainly serendipitous, resulting from standard analysis of the purity of the DNA by simple spectrophotometry. (Protein contamination results in absorption at 260nm.)

There were unusual features in the spectrophotometric properties, and even more marked changes when analysis was performed by the method of circular dichroism. As 2-aminoadenine was among the base analogues that had already been described and characterized, establishing that this was the base in the phage DNA that was present instead of adenine was possible by comparison of their physical chemical behaviour.

I find it ironic, in the context of the recent publicity, that this report (which was accompanied by a more extensive paper in the journal, Virology) received little attention in the subsequent 43 years.

3. and 4. Biochemical Pathway and Genes

The first of the triplet of recent Science papers established the pathway for the synthesis of the dZTP (where Z is 2-aminoadenine) that is the precursor for DNA synthesis, the DNA polymerase enzyme that was needed to handle this modified base, and an enzyme dATPase that removed the normal DNA precursor, dATP.

It also established that four of the genes that encoded these proteins are encoded by the phage genome. The strategy by which this was accomplished is worth presenting as it has been used in other circumstances to identify the genes for particular reactions. The general logic is:

The summary sentence for the first paper indicates that in this case they found a gene in the phage related in this way to host gene purA. The host gene catalysed a reaction of the same chemical type as the one required, but reacted with normal purines (hence the Pur) in standard pathway, and they were subsequently able to establish that the product of the phage gene (which they named purZ) catalysed the reaction in the pathway above. A comparison of the chemistry is shown below.

5. Identification in other organisms

One could, of course, search for 2-aminoadenine by purifying DNA from other phages (in 1977 this would have been the only option) and the authors of the recent paper did this in one case (the summary of their second paper) but they also employed the much faster general strategy of searching the phage genome sequences deposited in Genbank for genes similar to purZ (and the other three mentioned). This is aided by the grouping (clustering) of the genes of interest — an additional indication that they work together. This clustering is not always the same, but the diagram below shows the similarities between several phages and how this gives one confidence of the presence of the pathway in phages other than S-2L.

How ancient is this evolutionarily?

The last paper is concerned with the question of when this base change occurred in evolutionary time. The general strategy is to consider a phylogenetic tree of phages — which is generally assumed to reflect the phylogeny of their host bacteria. The diagram shows an imaginary simplified phylogenetic relationship. 1. Indicates the current species at the right, with their divergence from each other at various periods in the past on the left. 2. Represents the identification of phages in which the base changes are currently found by red balls, so that in 3. by colouring the branches in red we can deduce at what point in the past the enzyme system for producing and using the modified base arose. 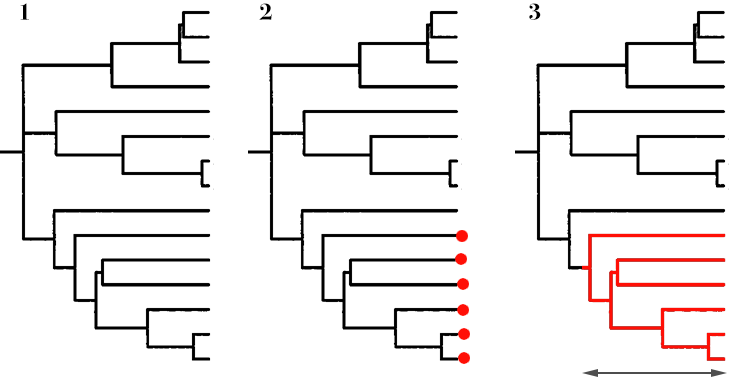 The third paper, in effect does this sort of thing and finds that this indicates that the 2-aminoadenine:

…has been used as an information carrier among siphoviruses since the evolutionary divergence of actinobacteria, cyanobacteria, and proteobacteria ~3.5 billion years ago.

Does this occur in bacteria?

This cluster of genes has not been reported in any bacteria (and you can be sure that the authors of the three Science papers looked), although one cannot exclude that this change has happened in some unstudied bacteria. However it is unlikely to be occur in known bacteria because of the rationale for its existence in phages. Bacteria have a system to combat phages called the restriction/modification system. They encode specific restriction endonucleases that cleave at specific sites in the DNA (generally 4-6 base pseudo-palindromes) and protect their own DNA by methylating bases in these sites. It was established in the 1980s that the substitution of 2-aminoadenine for adenine in phage S-2L renders its DNA resistant to many restriction endonucleases — i.e. this is a viral response to the bacterial defence system.

Not the answer you're looking for? Browse other questions tagged molecular-biology virology nucleic-acids or ask your own question.