If a small population left one continent and sailed to another, would the genes of the population that left show relation to the original population?

This question has a specific context, a religious one, and so I'm not sure this is the right place to ask, but I can't think of a better place. I would like as objective and unbiased an answer as possible. I hope the religious context doesn't make this an unsuitable question. I'll explain the religious context:

There is a religion that believes that a small number of Jews left Israel circa 600BC and sailed to the Americas, where they multiplied and built their own new civilization(s). This religious organization also has a history of teaching Native Americans that they are the descendants of this population, so therefore that their ancestors are Jews from 600BC.

But we're quite lucky in the modern age that we can do genetic testing! And they have done, and of course they've found no signs of a genetic relationship between any Native American tribes and any known Israeli or Jewish populations. The organizations response to this is that, after 2600 years, you wouldn't expect any genetic similarities between the two populations - if they've been physically separated for so long, all genetic markers of a relationship would have disappeared.

Is that correct? Would 2600 years be enough time to erase all genetic evidence that this population originated from Israel Jewish people?

For example, you could plot all the populations on a Principle Component Analysis and the migrants from the Middle East would cluster with other Middle East populations and not Native Americans. The fact that 2600 years had passed since the migration event doesn't change this. In the context of distinguishing between populations, that amount of time doesn't erase genetic differences.

A very similar event to what you mention has been shown to have occured when migrants from Persia moved to India with their Zoroastrian religion, forming the Parsee community in India. Clearly Middle East and Native Americans are much less genetically similar to one another than Indians and Iranians, so it would be similarly much easier to disinguish them genetically.

From the point of view of genome comparison the signature would be unmistakable, as @user438383 has pointed out in their answer. There may be however other methodological issues undermining this study:

While the scientific issue that I mention might not seem as much of a problem, the experinece shows otherwise. E.g., the highly controversial hypothesis of the Khazar ancestry of the Ashkenazi Jews has been a subject of much debate, with many studies both proving and disproving it. Khazars were a people and an Empire to the South of (modern) Russia that were an important political power throughout a few centuries. They are known to have converted to Judaism (or at least their elites). However, as this culture had vanished about fifteen hundred years ago, one cannot attest which people are descendants of Khazars and what genetic signal is an evidence of such a descent. Affirming or disproving this hypothesis is thus dependent on what is taken as a Khazar genome, and arbitrariness of such a choice produces equally arbitrary results.

Update
This is to bring precision regarding some of the remarks made in comments.

Would 2600 years be enough time to erase all genetic evidence that this population originated from Israel Jewish people?

[..] comparing two genomes proves nothing, if one cannot attest their origin. Jewishness issue was mentioned in passing, as a kind of things that a scientist needs to take into account, when posing an answerable research question.

Update 2
Seeing the number of up- and down-votes to my answer, as well as the comments, I would like to add a bit more rigorous discussion regarding the difficulties involved in such a study. There are three points that one needs to address:

Point 1. is easiest to answer: yes. One could do a back-of-the-envelope calculation that 2600 years is about 100 generations, which means about the same number of new mutations in a 3 billion nucleotides long human genome. Recombination poses a greater challenge, but we still expect to be able to compare chunks of genome of tens or even hundred thousand nucleotides long. This perhaps already answers the OP, and this is why they accepted the answer by @user438383

Point 2 can be addressed in (at least) two ways:

Point 3
A correctly posed scientific question of this type should not make any reference about Jews and should not draw any conclusions about them. Doing so is just bad science. Indeed, Jews is a complex term that may refer to

It also has a more direct bearing on our question, since it doe snot allow us to attest the ethnicity of the founders of the community in question, nor do the members of thsi community need to be descendants of its founders.

You may have seen a "tree of life" image like this: 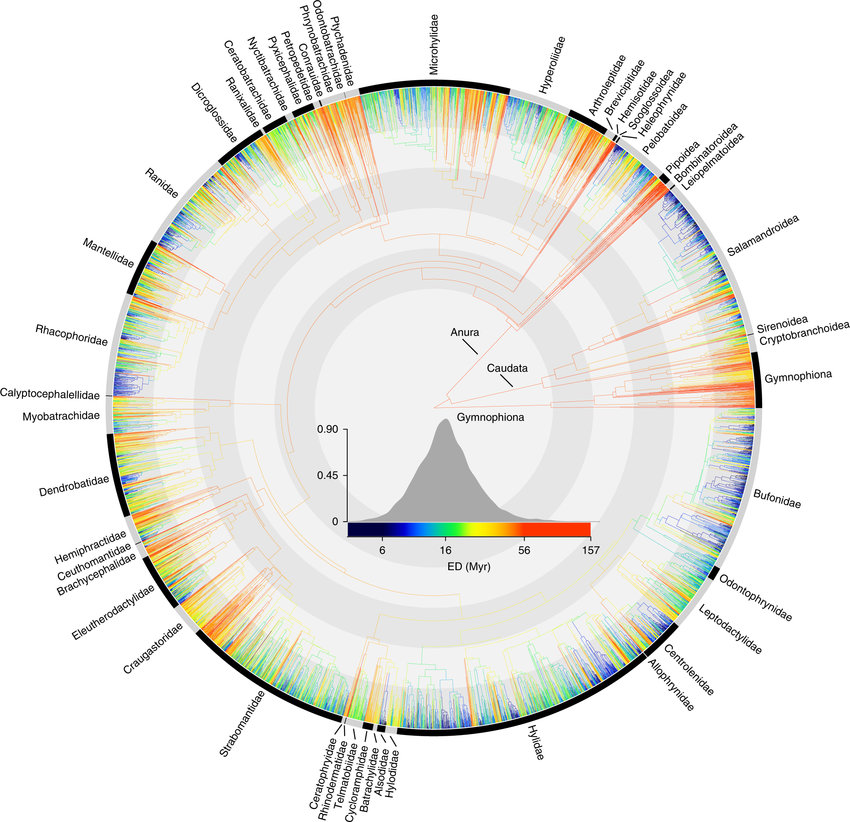 While this particular image only shows amphibians, such trees have been constructed for more or less every known species, using the morphological and genetic information available to us. The field responsible for studying and constructing such trees is called molecular phylogenetics, and it is predicated on the idea that such a tree may be uniquely constructed with nothing more than the genome of each species.

Although we certainly do not have genomes for every species in history (or even every extant species), it is believed that the "tree of life" is a single tree. That is, there are no "disconnected" subtrees which have no relation to the rest of the tree. The notion of a group of organisms which descended from some ancestor, and then became so isolated as to "erase all genetic evidence" of their relationship would imply that some subtree exists which cannot be connected to an ancestor node on the full tree.

Now, we need to be careful here. It is possible for two groups to only appear genetically related by a common ancestor which is older than their real common ancestor. For instance, suppose we have that group A begets group B begets group C. We want to know if C is really descended from B. It may be the case that, based on the molecular record, we can only say that B and C are both descended from A, because B is only modestly different from A, and C has changed all those differences, even though it was actually descended from B. So, I would say that it is theoretically possible.

However, there are a large number of "ancestry-informative markers" (AIMs) which allow us to determine from which continent a person's ancestors most likely originate. For a given individual genome, we can say with decent confidence whether their ancestors came from Europe/Asia or the Americas. Note that there are no concerns about populations which might have "bred out" all of their AIMs to confound a determination of their "ancestral continent(s)". Perhaps that's because some AIMs have 100+ markers which would need to disappear in just a few hundred generations (the most extreme example would be a 13-year generation, which would give 200 generations over 2600 years). AIMs are far too stable to simply disappear at a rate of nearly 1 per generation (if they did, then we couldn't reliably use them to determine ancestry in the first place).

Now, if we look at the specific example of a central Asian population seeding the Amerindian population, we have the problem that Amerindians are most closely related to northeast Asians (Siberians, in particular). If Amerindians were really established by Jews, why don't they have strong matches to the Middle Eastern markers common among Jews? So this claim fails in both directions: First Nations peoples are not genetically similar to any recognized/acknowledged Jewish population, but are similar to the north/east Asian population which almost certainly crossed the Bering land bridge after the end of the last ice age. So much for Atlantic canoes... (or did the Jews take the long way around, travelling through Asia and Siberia to the Americas?)

Not the answer you're looking for? Browse other questions tagged genetics human-genetics or ask your own question.

4
Theoretically, what technique would one use to modify a virus so that it only affected a subset of the population?
0
Two heterozygote mice for skin color are reproduced. Find the probability that in 3 children 2 will be dark and one white
1
If a DNA letter is one of A,T,C and G, and there are 3 billion base pairs, why don't we say that there are 6 billion letters in the genome?
0
What is the impact of selection on orthologous and paralogous genes? How would this impact differ in different regions of protein coding genes?