Meaning of ‘motif’ in molecular biology

I would like to understand the meaning of the term motif as used in molecular biology.

In an article in Nature Biotechnology, Patrik D’haeseleer states:

Sequence motifs are short, recurring patterns in DNA that are presumed to have a biological function. Often they indicate sequence-specific binding sites for proteins such as nucleases and transcription factors (TF).

Does this mean that in the DNA sequence of a gene there are recurring patterns/subsequences of DNA which are presumed to have a biological function? If so, can such motifs be found simply by using a software that detects recurrent substring in a string?

In relation to the biological function of such motifs, I would like clarification of this extract from a paper by Williams et al.:

By “motif”, do the authors mean that the gene PF1193 has a subsequence which is found many times in the DNA sequence of the gene that encodes ferritin- and Dps-like proteins, and that this may indicate that they (genes and the related proteins encoded) have similar characteristics/properties?

How does this relate to the sentence in the extract from the Nature Biotechnology paper?

Often they indicate sequence-specific binding sites for proteins such as nucleases and transcription factors (TF).

Meaning of Motif in Molecular Biology

In English the word, motif (borrowed from the French), has a variety of meanings in different areas. The one that is borrowed in molecular biology is that of pattern together with a hint, perhaps, of emblem or badge.

Types of Motif in Molecular Biology

Here the word motif is applied mainly to the three related macromolecules, DNA, RNA and protein. All of these are linear chains of restricted varieties of defined components (four nucleotides, 20 amino acids) arranged in defined ways which we refer to the sequence of the macromolecule. Within the overall sequence there can be sub-sequences, which, if they repeat represent patterns, and which may have functional significance. We refer to such patterns as:

The first of these is what D’haeseleer is referring to. It should be noted that these sequence motifs can be absolute, or consist of consensus sequences, such as the one for the ROX 1-binding site in the article cited:

However the nucleotides or amino acids are not the only components of macromolecules the arrangement of which can produce a pattern. Motifs in molecular biology can be composed of structural components. This is expressed in the following definition of protein motif:

And a similar definition that considers only structural motifs in proteins adds: “An example… is a helix-turn-helix motif.” This is a motif in certain proteins that bind DNA.

The limit of the approach suggested is that statistically one would expect any small sequence pattern to recur in DNA, and the problem is how to tell which recurring patterns have biological significance. It should be realized that is not the sequence motif alone that makes it functional, but the context in which it is found. Thus, a TATA box or other DNA motifs that act as binding sites for transcription factors were discovered (and are differentiated from other random or non-functional occurrences in the genome) by their proximity to the positions where transcription is initiated. Their function was confirmed experimentally, e.g. by binding RNA polymerase to the DNA. (This, I hope, answers the last query about the function of motifs as protein-binding sites.)

So, in general, no. Although I admit that I have personally use computational approaches to discover new small hydrogen-bonded protein motifs (a somewhat specialized area).

This is not a DNA sequence motif. It is not even a protein sequence motif, but a structural protein motif. The definition can be found on InterPro:

This entry represents a group of proteins, containing ferritin-like domain, which is an about 145-residue domain made of a four-helix bundle surrounding a non-heme, non-sulphur, oxo-bridged diiron site. The diiron site is contained within a twisted, left-handed four- helix-bundle constituted of two anti-parallel helix pairs connected through a left-handed crossover connection.

It is shown here with the helices coloured yellow and the iron atoms red spheres: 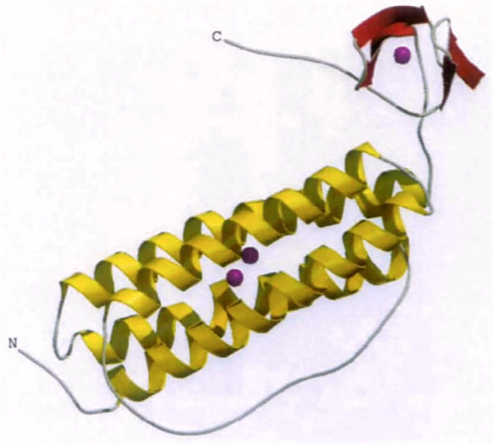 When they say "motif", do they mean that the gene PF1193 has a subsequence which is found many times in the DNA sequence of the gene that encodes ferritin- and Dps-like proteins ? And this may involve that they have similar characteristics/properties ?

Yes, although motif sequences may not be exactly identical, as what really matters is the 3-dimensional structure produced and thus its function (whether binding, enzymatic, or whatever). You can think of them as recognizable functional units, often but not always self-sufficient. For example, a promoter sequence in DNA would be considered a motif, as would be a zinc finger in a protein, as would be a poly-A tail on an mRNA.

A problem in using motif sequences to identify genes of related function is that during evolution, sequences may have changed even as 3-D structure (and function) remain similar. Here's a paper working on that problem from about a decade ago:

1
How to interpret the simple sequence repeat (SSR) on the coding sequence, but not the related protein sequence?

3
How to learn molecular biology through pubmed research articles?
9
Comment on the introduction to a bioinformatics paper
4
protein-binding sRNAs
0
Bioinformatics - DNA binding, sequence-specific protein data
1
Rules of motif forming
0
The meaning of the "Score" in ScanProsite
4
Molecular animations of, say, protein synthesis, are simplified, but how exactly?
1
What is sigma factor PvdS?