How is the mRNA transported out of the endoplasmic reticulum?

In eukaryotes the nuclear envelope is continuous with the ER, so what helps it out of that?

I'd make a comment if I could, but I don't think mRNA ever enters the ER. When a ribosome is building a protein destined for export or for being inserted into the membrane, it travels to the ER membrane and binds to a protein in that membrane called Sec61, which guides the new peptide sequence through the membrane. However the portion of the ribosome that reads the mRNA is always in the cytoplasm. So the mRNA never enters the ER, it just gets close the cytoplasmic side of the ER membrane. 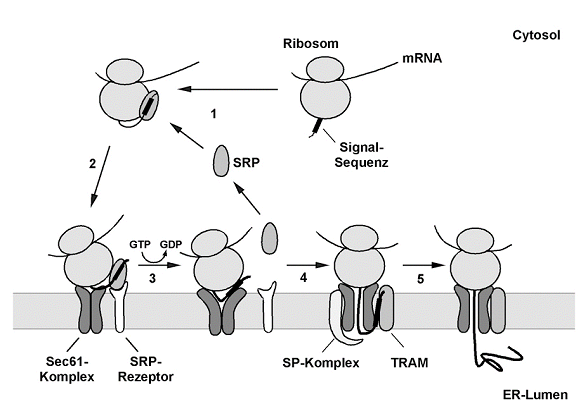 The proteins mediating the transport of mRNA out of the nucleus (nucleoplasm/karyoplasm) are called "karyopherins" and belong to the nuclear pore complex family.

Prior the creation of the final form of mRNA, various proteins are attached to the so called pre-mRNA and a mRNA-protein-complex is built (co-transcriptional). Some of these proteins carry factors for splicing and processing, later RNA-binding proteins are added. (RNA binding proteins such as $Npl3p$, $Gbp2p$ and $Hrb1p$ (serine/arginine-rich proteins) accompany mRNA out of the nucleus. )

After mRNA processing mRNA export is initiated by dephosphorylation of $Npl3p$, leading to binding of $Mex67$ (Saccharomyces c.), forming a complex that interacts with the nuclear pore complex.

That is the way mRNA is able to leave the nucleus.

Translation can occur either in the cytoplasm or in the ER. At one point it was believed that all mRNA begin being translated in the cytoplasm. However, if the protein the mRNA codes for happened to be a secretory protein or a membrane protein, it would have a certain sequence near the start of it (N-terminal sequence). This sequence binds to something called the Signal Recognition Particle (SRP). And once the SRP binds to the mRNA/ribosome/partially-synthesized peptide, it would help it locate to the ER.

So to summarize: Many proteins that need to be synthesized at the ER have a certain sequence that binds to SRP. The mRNA begins being translated in the cytoplasm, but once SRP binds it is moved to the ER.

Of course people now are starting to think this is wrong or at least not the whole story. You can read about the SRP and why some people think its wrong in the intro of this paper

Not the answer you're looking for? Browse other questions tagged cell-biology mrna or ask your own question.