Is it known how some heat-resistance Bacillus spores repair their DNA after having been heated to 420 °C? (but not much higher)

Discussions below several recent posts in Space SE (links below) indicate that bacterial spores are a serious problem when considering how to prevent a future spacecraft mission to subsurface ocean worlds like Europa or Enceladus, ice-crusted moons of Jupiter and Saturn believed to have substantial liquid water oceans below.

We found that spores of Bacillus amyloliquefaciens rank amongst the most resistant to high temperatures with a maximum dry heat tolerance determined at 420 °C. We found that this extreme heat resistance was also maintained after several generations suggesting that the DNA was able to replicate after exposure to these temperatures. Nonetheless, amplifying the bacterial DNA using BOXA1R and (GTG)5 primers was unsuccessful immediately after extreme heating, but was successful after incubation of the heated then cooled spores. Moreover, enzymes such as amylases and proteases were active directly after heating and spore regeneration, indicating that DNA coding for these enzymes were not degraded at these temperatures. Our results suggest that extensive DNA damage may occur in spores of B. amyloliquefaciens directly after an extreme heat shock. However, the successful germination of spores after inoculation and incubation indicates that these spores could have a very effective DNA repair mechanism, most likely protein-based, able to function after exposure to temperatures up to 420 °C. Therefore, we propose that B. amyloliquefaciens is one of the most heat resistant life forms known to science and can be used as a model organism for studying heat resistance and DNA repair. Furthermore, the extremely high temperature resistivity of these spores has exceptional consequences for general methodology, such as the use of dry heat sterilization and, therefore, virtually all studies in the broad area of high temperature biology.

Here are two separate excerpts from the Results and discussion section that seem germane to my question:

These observations showed that extensive DNA damage occurred in the spores during exposure to extreme heat. While no germination of inoculated spore ashes occurred immediately after heating, continued incubation did indeed result in germination and vegetative cell growth (Fig. 1c). That result, together with the fact that DNA was present in the spores, suggests that spores of B. amyloliquefaciens contain a very versatile and efficient DNA repair mechanism able to “reverse” the heat-induced damage, resulting in spore germination and the production of vegetative cells.

Remarkably, activity was found for these two enzymes immediately after heating, showing clearly that these proteins survived extreme temperatures within the spores of B. amyloliquefaciens. Moreover, we also found that both enzymatic activities were preserved at the same levels, over two generations (Fig. 5). We assume it is very likely that spore proteins are responsible for the repair of damaged DNA after extreme temperature exposures.

My current understanding is that it is proposed that the spores contain proteins that are ready to repair the substantial DNA damage caused at 420 °C as soon as the spores are incubated.

Is it known how some heat-resistance Bacillus spores repair their DNA after having been heating to 420 °C? Do spores so treated then incubated first absorb enough water to provide mobility for these proteins to start moving around and repairing the DNA? Do they require energy to do this? If so, is the energy source stored in the spore or absorbed from the incubation medium? 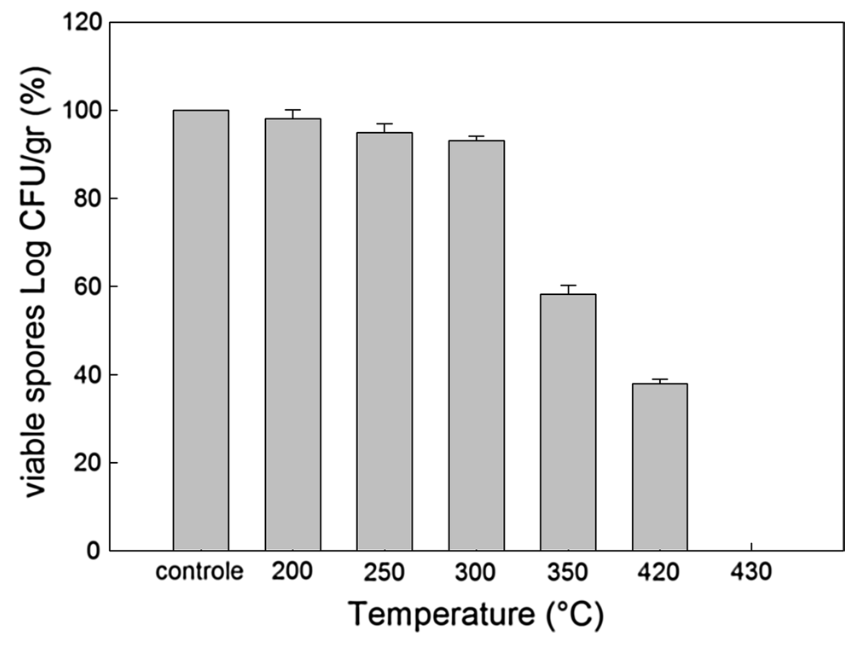 4
How can (or did) Deinococcus radiodurans continue to evolve after developing resistance to mutation?
5
Bacteria trapped in crystal inclusions found 'alive' after 50,000 years - what were they eating all that time?
2
Could biofilms float and survive in the sulfuric acid clouds of Venus?
12
Will proper autoclave treatment really "inactivate all resistant bacterial spores"? If not, how widespread are autoclave-resistant bacterial spores?