Does hormone participate in metabolic activites? 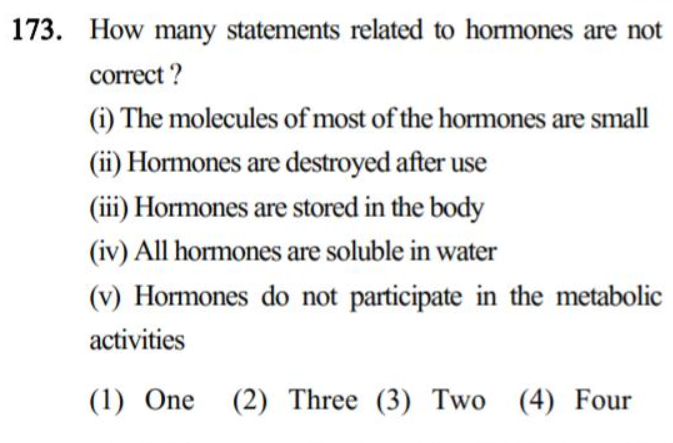 My take on question-

Ah, good old bad exam questions. Invoking subjective, arbitrary and ambiguous adjectives and verbs. My very rough and blunt appraisal would be that many hormones are indeed widely and relatively small -ish. They are often 're-usable' after binding since their binding to receptors is often reversible. Some endocrine cells store hormones, while other hormones are entirely in flux. Some hormones are soluble, others aren't, yet others are not but are emulsified by things like micelles (e.g. casein). Some hormones certainly participate in metabolism; think insulin's role in glucose metabolism.

First, let's just acknowledge the lax definition of hormone before we go into each one-by-one.

Generally correct. I think most biologists would be okay with saying this is generally true. They are necessarily small in many cases because they function in long-range endocrine or paracrine signaling and must satisfy preconditions for such functions. Consequently, it's easier to make a long list with small molecular weight hormones than it is to make a list of large molecular weight hormones.

Generally incorrect. That depends what destroyed and use mean. If by use one means binding to a receptor to transduce a cascade, then a single hormone molecule typically can be re-bound to the same receptor on one cell, and/or can be received by different cells. Some hormones are 'destroyed' by endocytosis and subsequent lysis within the endomembrane system, others have to be inactivated by proteases or filtered from bodily fluids by, say, kidneys.

Some are, others are not. Steroid hormones, being lipophilic, cannot be stored in vesicles, and so are synthesized in mitochondria and smooth endoplasmic reticulum as precursors. I would be cautious to claim that precursors are hormones, so let's say with confidence that these cannot be stored. However, many other hormones that are usually not lipophilic, such as amino-acid based hormones, are typically stored in secretory granules. See here or here.

False. Counterexample: steroid hormones are insoluble in water, which is why they are carried by transport proteins in the aqueous medium of the blood.

Not the answer you're looking for? Browse other questions tagged homework endocrinology or ask your own question.

3
Steroid Hormone Signalling
6
Renin - enzyme or hormone?
0
estradiol hormone role
5
What does it mean for a hormone to be "active"
4
Does TSH and Growth hormone have any role in menstruation?
2
Is Thyroxine a hormone?
2
What is the difference between a cytokine, a hormone and a protein hormone?
1
Why isn't there T2 thyroid hormone?