What are the roles of ATP and ADP in muscle contraction?

I've always known that the hydrolysis of ATP generates ADP, P, and energy, so I'd assume that if energy is necessary in a given process, ATP hydrolysis should occur (or another exothermic process).

What I don't understand is how this works in muscle contraction. I assume that part of my misunderstanding might be due to the lack of knowledge of how the contraction works at a molecular level, as well as how this phenomenon relates to the contraction at the macroscopic level (my arm contracting), hence I'm writing this question.

From a number of sources, including the image below (which is taken from an book in Italian, so I don't include the text; with reference to the figure, stadio means stage, by the way) and the one in this related question, I understand that the mechanical energy is released (i.e. the muscle exerts power on the external world) both when P is released when ADP is released, but definitely not when ATP is hydolised.

Now I do understand that the cycle in the image has to repeat a tremendous number of times while I simply raise my hand to say hello, for instance, but my knowledge of physics tells me that, whatever the amount of energy required to raise my hand is, the two power srokes summed up on all the elmentary cycles have to provide that energy (plus some more to overcome losses, like joint friction or whatever).

In the meanwhile that I write, I start to think that probably the core of the matter is that I mistakenly thought that ATP is what provides the energy for the mechanical action, whereas probably it provides the energy (between stage 5 and 1) that is stored in the myosin (stage 1), such that when the mechanical energy is required (between stage 1 and 2), the myson is able to release it (from stage 2 to stage 4). Does this make any sense? 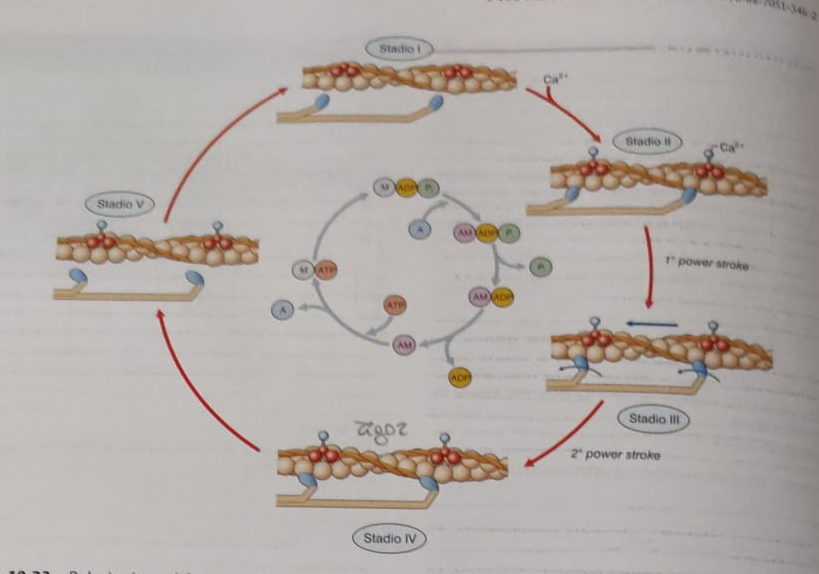 As a first approximation, I think your explanation makes sense. You can imagine the system having a spring, and the hydrolysis of ATP providing the energy to load the spring (store the energy in the myosin). Afterwards, this energy is released as mechanical work in the power stroke(s).

However, this analogy will not lead you far because things get complicated, especially if you want to study this process from a physical perspective. In biological textbooks (such as the one you provided), you will find the whole cycle being portrayed as going in one direction only (clockwise red arrows in your image). But because this is happening in the molecular world, most of the reactions/processes are actually reversible. In fact in molecular motors (such as your example with myosin), thermal motion frequently leads to backward steps, especially when the muscle is under high load. This can nowadays be directly measured with various single-molecule techniques:

The simplified biophysical models for molecular motor are ratchets, using thermal motion. They are in a way analagous to Maxwell's demon. But the same way as Maxwell's demon is not feasible because it violates the second law of thermodynamics, a molecular (Feynman–Smoluchowski) ratchet cannot generate macroscopic work by solely extracting the thermal motion. And that is where the energy of ATP comes into play: the energy is used to keep the system out of equlibrium and break the symmetry of motion in space and time (steps forward become more frequent than steps backward).

My answer is really far from being self-sufficient or self-explanatory, but I hope it provides at least some starting keywords for your further research of the topic.

Not the answer you're looking for? Browse other questions tagged human-biology physiology human-physiology muscles bioenergetics or ask your own question.

3
How is ATP involved in muscle contraction?

3
How is ATP involved in muscle contraction?
7
At any given moment, how much energy is stored in the human body as ATP?
4
What is the actual storage form of energy in muscles? ATP or Glycogen?
4
What stops myosin during muscle relaxation?