Why are basophils and eosinophils considered granulocytes?

I have read that granulocytes are a type of leukocytes that have granules (hence the name) visible by microscopy. But then there is something called a granulocyte/monocyte progenitor cell, which I thought would give rise to these structures. From this progenitor cell neutrophils and monocytes are created, but not eosinophils nor basophils. Furthermore, monocytes are agranulocytes. I believe my questions are all related:

Yep, that's it; like you said, that's where they get the name: their appearance. Not their function or progenitor, just their appearance, and they were named long before the other factors were understood. That history goes back to at least the mid 1800s:

Paul Ehrlich's techniques, published between 1879 and 1880, for staining blood films using coal tar dyes, and his method of differential blood cell counting, ended years of speculation regarding the classification of white cells.

In 1846, Thomas Wharton Jones (1808-1891) described "granule blood-cells" in several species including humans. The term "granule cell" had also been used by Julius Vogel (1814-1880), who had previously observed similar cells in inflammatory exudates. Vogel, in turn, was aware of the work of Gottlieb Gluge (1812-1898), who had observed "compound inflammatory globules" in pus and serum that resembled eosinophils. Almost 20 years before Ehrlich developed his staining methods, Max Johann Schultze (1825-1874) performed functional experiments on fine and coarse granular cells using a warm stage microscopic technique and showed they had amoeboid movement and phagocytic abilities. Despite these earlier observations, it was Ehrlich's use of stains that heralded the modern era of studies of leukocyte biology and pathology.

It seems like there is not a settled terminology for various classifications of immune cell progenitor cells, with different publications using different terms. For example, a figure on Wikipedia uses "myeloblasts" to describe cells that undergo either granulopoiesis to become some granulocyte, or they become monocytes: 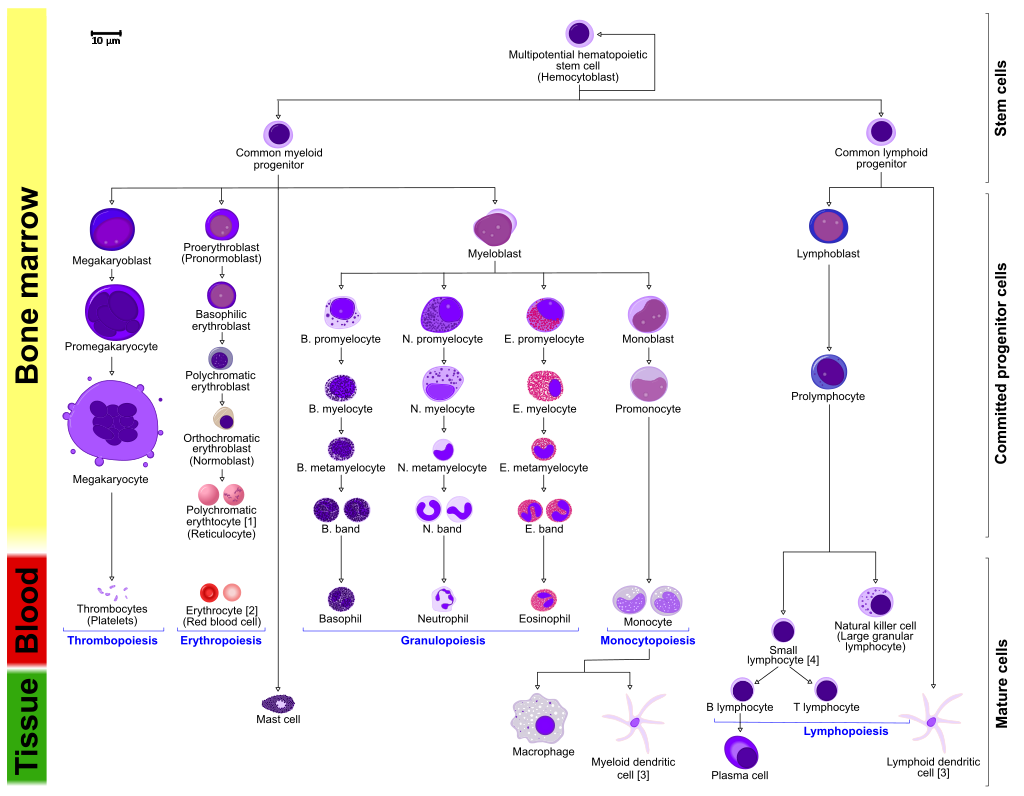 I don't see any source where a "granulocyte progenitor cell" becomes a monocyte, only that a "granulocyte/monocyte progenitor cell" does; the "granulocyte/monocyte" label seems most clearly interpreted as "granulocyte and monocyte" progenitors, so I see nothing conflicting with these cells giving rise to both granulocytes and monocytes. I also do not see evidence that there is a stage of differentiation in which a particular cell will possibly become a monocyte or neutrophil, yet will not become eosinophil nor basophil; every textbook-style reference I find shares the pattern from the Wikipedia image above or discusses a stage of differentiation in which a cell is either fated to become a monocyte or any of the granulocytes. Given the complexity of differentiation, it's certainly possible some paper has made that claim, but I see no evidence for it.

Not the answer you're looking for? Browse other questions tagged immunology hematology classification or ask your own question.

9
Multi-nucleated cells: advantages and examples?
7
Why are red blood cells considered to be cells?
3
How do you determine if donated, stored blood is viable?
1
Where are eosinophils and basophils phagocytic?