I know that water moves into the root hair cells from the soil via Osmosis down the water potential gradient and then this water travels through diffusion and osmosis through the symplast pathway reaching the base of the xylem vessels. But there isn't any movement of water through the apoplast pathway. So I am thinking that the water also moves in between the cell walls of root hair cells without crossing the cell membrane and hence by diffusion and then takes up the apoplast pathway. Am I correct? Because in my book, it is mentioned that water goes in by osmosis and nothing is mentioned regarding diffusion. Someone please clarify this.

water goes in by osmosis and nothing is mentioned regarding diffusion. Someone, please clarify this.

You'll need a good understanding of the difference between osmosis and diffusion for this.

Regarding the movement of water through the various pathways.

I'm quoting this directly from the Plant Physiology book (Taiz and Zeigner). Please refer to the same for more information.

In the soil, water is transported predominantly by bulk flow. However, when water comes in contact with the root surface, the nature of water transport becomes more complex. From the epidermis to the endodermis of the root, there are three pathways through which water can flow: the apoplast, transmembrane, and symplast pathways.

In the apoplast pathway, water moves exclusively through the cell wall without crossing any membranes. The apoplast is the continuous system of cell walls and intercellular air spaces in plant tissues.

The transmembrane pathway is the route followed by water that sequentially enters a cell on one side, exits the cell on the other side, enters the next in the series, and so on. In this pathway, water crosses at least two membranes for each cell in its path (the plasma membrane on entering and on exiting). Transport across the tonoplast may also be involved.

Please follow the three pathways in the image to get the insights. 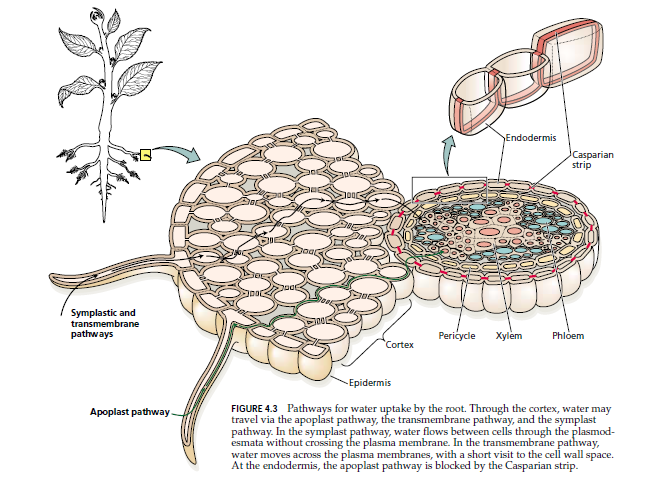 5
Diffusion of Hypotonic solution into solution with glucose and starch
2
When does DIFFUSION occur and not OSMOSIS, and the otherwise?
2
Osmolarity vs. Tonicity
5
Why does a high osmotic pressure pull water in, yet a high hydrostatic pressure pushes water out?
2
Why is a urea solution hypotonic relative to RBC?
0
Water potiental
0
Is osmosis diffusion of water?
0
Osmotic pressure and turgor pressure details