It is often stated that human and chimp genomes are 98% similar, e.g. this is included in an article on the American Museum of Natural History website.

I also see in the release notes for the NCBI chimp genome:

Contigs were assembled using the human genome as a guide, and are therefore "humanized" in their construction. This is an important distinction, as some sequences, such as insertions, deletions, and gene duplications, may not be accurately represented by the current chimpanzee assembly.

So, does building the chimp genome using the human genome as a scaffold affect the figure of 98% similarity? If so, do we know how much?

(A previous question on this list mentioned a 2018 assembly independent of a human scaffold. Has this resulted in any revision of the figure?)

The similarity IS high

The main thrust of the question is the high similarity (98–99%) between human and chimpanzee genomes. The concern is that the use of the human genome as a scaffold for assembling part of the chimp sequences in the whole chimp genome project, published in 2005, is a possible source of error in this figure so that the similarity is actually signficantly less.

The answer is an unequivocal NO because:

Thus, even before DNA sequencing, DNA hybridization methods indicated an approximately 98.5% similarity of single-copy DNA. As one would imagine, before the technology for whole genome sequencing was developed many individual chimpanzee genes were sequenced using ‘traditional methodology’ that depends on mapping and constructing overlaps, and only subsequently comparing the sequences with the corresponding human genes. This methodology also revealed insertions/deletions of the genomes relative to one another, and led Britten to estimate on overall similarity of 95%, with 1.4% divergence due to base substitution and 3.4% difference due to insertions and deletions. Furthermore the whole of chimp chromosome 22 was determined without reference to the human genome. Finally, in the whole genome sequencing project, part of the sequence was determined assembling the shotgun fragments both with and without use of a human scaffold in order to validate the former approach.

Comments to my initial answer on this point and my assertions in reply appear not to have been understood. I have therefore constructed a diagram (below) to explain this more clearly. 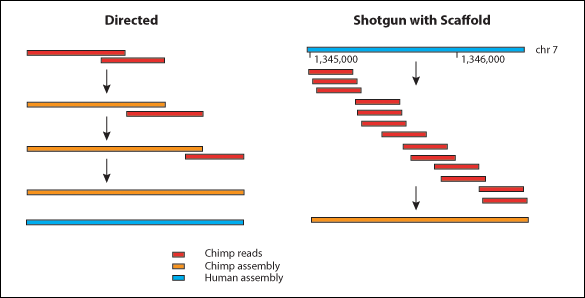 The left-hand side of the diagram shows a much simplified schematic of steps in ‘traditional’ directed sequencing. This can start with a focus on a particular gene or region of the genome from which large clones (BACs or bacterial artificial chromosomes were used for chromosome 22) and, after mapping, smaller overlapping fragments were generated, sequenced, partially assembled and further overlapping fragments generated and sequenced. In this way the assembled sequence is gradually extended. When complete (it may be joined by overlap to other large fragments) it is compared with the corresponding region of the human genome and base differences, insertions or deletions noted catalogued.

The second approach, using a human genome scaffold, relies on, and is justified by, the prior knowledge of the very high similarity between the two genomes. The approach here is to generate and sequence millions of random fragments, but as they are small the overlap tends to be small and not unique in the way that they are in the directed approach. Thus the second step is to arrange these small fragments in groups by their similarity to the human genome. I emphasize that this is done — as it must — after the chimp fragments have been sequenced. What this step does is place the fragments at co-ordinates on the human genome so that they can be located relative to one another. That’s it for the human genome — the method doesn’t need it any more. The placed fragments are then stitched together computationally into an assembly on the basis of small overlaps that would not have been meaningful without the initial alignment. Because of chimpanzee polymorphism there will be redundancies at particular positions. I read in the supplementary data to the paper that if this was greater than two, the situation would be reviewed for artifacts and dealt with.

As the disclaimer the poster quotes makes clear, the use of a human scaffold can miss duplications, but it cannot and does not change the chimp base calls. One of the key reasons for sequencing other primate genomes is to have a precise knowledge of how they differ from ours. It would have negated the whole purpose of the project (not to mention being unethical) to choose between two possibilities on the basis of which was the same as the human (as the poster suggested might occur). This was not done. Problems with the data were subject to rigorous critical review. If the sequence of a region was uncertain it was marked as such.

And, of course, having this initial sequence allowed the uncertainties regarding insertions, deletions and duplications to be specifically addressed in subsequent work.

Appendix: The 2005 report in context

The paper describing the “Initial sequence of the chimpanzee genome and comparison with the human genome” was published in 2005. It is 18 pages long (plus appendices) and contains no sequence data and was the work of a consortium of about 70 highly skilled workers at 24 different institutions with a spectrum of different skills, including informatics and statistics. There is no mention in the abstract of the overall percentage similarity, which was already known. This work was preceded by other work on this topic over a number of years (as mentioned) and was not intended as an end in itself — it was intended to lay the foundations of further work to find the effects of the differences between chimp and human genome of the type discussed in the more recent paper mentioned in the question. Work of this type has been assisted by the vast technological advances that have occurred over the last 16 years. This is the way contemporary science works.

Share
Improve this answer
edited 2 days ago
answered Oct 15 at 21:58

You can look at the sequence similarity between homologues yourself. Here's just one example.

Those sequences are 99% similar, and that's not because they used human reference a assembly guides. It's because the sequences really are that alike.

Not the answer you're looking for? Browse other questions tagged evolution human-genome or ask your own question.

2
Significance of the resequencing of the chimpanzee genome