How do mRNA vaccines work with respect to presentation of the antigen?

As I understand it, mRNA vaccines operate by taking a gene for some distinctive feature of the target virus and arranging for the cells of the vaccine recipient to manufacture the proteins that make up the distinctive feature and present them to the body of the host, which will then form an immune response to the feature.

My question is: how is this feature, assuming it has been manufactured, presented to the body? In other words, is the expectation that it would exist as a separate unit and that separate unit would exit the host cell somehow and be recognized?

MHC presentation of cleaved spike protein is only part of the picture; afterall, the immunity conferred by vaccines is largely owed to neutralizing antibodies produced by B-cells, which do not recognize MHC-bound peptides but rather intact antigen. While MHC presentation is important for T-cell (and ultimately B-cell) activation, the fact is that the spike protein encoded by these mRNA vaccines is presented on the surface of transfected cells for B-cell recognition.

Here is a great review that not only discusses the mRNA vaccines but, as far as I can tell, all of the other vaccine strategies as well. It should answer your question in more detail than I would presume to.

In the course of cellular SARS-CoV-2 infection (Fig. 1a), the S protein is synthesized from one of the viral subgenomic mRNAs and co-translationally transported into the lumen of the endoplasmic reticulum (ER) by the use of a signal sequence at its N-terminus, comprising residues 1 to 13 of its total 1273 amino acids... After completion of translation, the protein remains attached to the ER membrane through a C-terminal membrane anchor... When S is synthesized as an isolated protein (Fig. 1b) (as in mRNA and adenovirus vector vaccines as well as for production of recombinant subunit vaccines), the pathway of biosynthesis is very similar. 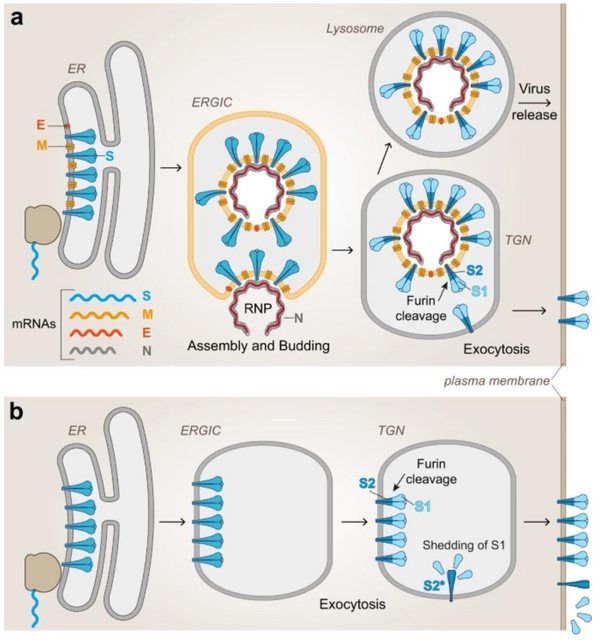 Fig. 1: a Infected cells: Subgenomic mRNAs for viral structural proteins are translated in association with the ER (S, M, and E) or in the cytoplasm (N), and virus assembly takes place in the ERGIC. Virus particles are transported through the TGN and released from the cells probably via lysosomes. During transport, S is cleaved into S1 and S2 by the cellular protease furin in the TGN. Some spike molecules, not assembled into virions, are also transported to the plasma membrane despite the presence of an ER retention signal15. b Transfected cells: Biosynthesis of S occurs in the absence of interactions with other viral proteins. Proteolytic cleavage into S1 and S2 occurs in the TGN similar to that in infected cells, but some shedding of cleaved S1 and conversion of S2 into its post-fusion structure (S2*) may occur in the absence of stabilizing mutations. ER—endoplasmic reticulum; ERGIC—endoplasmic reticulum Golgi intermediate compartment; TGN—Trans Golgi Network; RNP—Ribonucleoprotein; Viral proteins: S—spike, M—membrane; E—envelope; N—nucleoprotein.

Your assumption is wrong. A mRNA vaccine only contains a mRNA for the protein against which you want to vaccinate, encapsulated in a lipid membrane. These membrane vesicle fuses with the membrane of the target cell and releases the mRNA into the cell. There free ribosomes can bind to the mRNA and translate it into a protein. Part of this protein is presented on the cell surface by the MHC complex and thus presented to the immune system. The mRNA is degraded after some time (although it has been modified to slow down this process), no further copies are made or integrated into the genome.

Speaking of virus based vaccines (like Sputnik V or Astra Zeneca) rely on a virus to deliver a piece of DNA into the cell which contains the information on the protein against which you want to vaccinate. This is transcribed into mRNA and eventually translated into protein. From the virus DNA usually the genes which are responsible for replication are removed so you get no new generation of viruses. Also the virus cannot do anything on its own, since it is not alive and needs a target cell and its machinery.

This resource gives a nice overview over the different vaccine types.

How do mRNA vaccines work with respect to presentation of the antigen?

According to a DynaMed article, the egress mechanisms expected to play a role are 3: 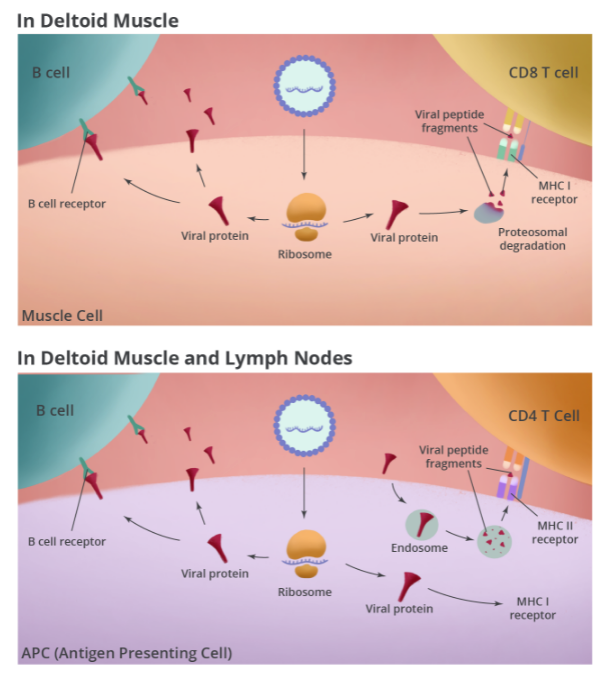 (Note that this image may be somewhat misleading, in that [skeletal] muscle fibers [which are very long lived, multi-nucleated cells] don't normally express MHC-I according to a (peer-reviewed) article. I'm unsure if satellite stem cells in the muscle, which serve to repair the multi-nucleated fiber cells by supplying nuclei, have MHC-I.)

As you self-answered, in muscle cells, the MHC-I pathway exposes peptide fragments to "killer T-cells" (CD8)... but there's also release of proteins into extra-cellular space from where they are picked up by B cells, which produce antibodies.

Further MHC-II is engaged in APCs present in muscle and lymph nodes; we know at least from the reported side effects of mRNA vaccines that lymphadenopathy (swelling of lymph nodes) does happen often enough following mRNA vaccine administration.

I think however that the relative ratios of spike protein (following mRNA vaccine administration) reaching these 3 routes haven't been exactly quantified. (I've search a fair bit, but I could not find any papers on exactly that issue.)

Ultimately, both memory B cells and memory T cells (hopefully) give long-term immune memory against that kind of infection, which at least give the host a head-start in a race against a new infection.

It's worth noting that mRNA vaccines don't produce the same ratios of neutralizing to binding antibodies (to the spike) as a real SARS-CoV-2 infection.

vaccinees generate more non-neutralizing antibodies than COVID-19 survivors resulting in a lower ratio of neutralizing to binding antibodies. These data were already apparent in the early phase clinical trials but remained unrecognized at the time (Walter, 2020).

[...] the burning question of whether the abundant non-neutralizing antibodies do have a protective effect in vivo will need to be elucidated by follow-up studies

The way the antigenic material is presented is via a peptide MHC complex which appear on the surface of the cell. The various proteins present in a given cytoplasm are randomly selected and automatically chopped up by proteosomes and the resulting short peptide chains are then channeled through a special kind of cellular structure called a major histocompatibility complex and mounted on its surface exterior to the cell. If the target antigen protein is indeed being successfully manufactured inside the cell, then we can it expect that these products will be periodically cut up in the manner described and be exposed. The exposed peptide then serves as an example both for helper T-cells to stimulate immune response (such as antibody class switching), and also serves as the epitope to cytotoxic T-cells which can kill the infected cell. Below is a diagram illustrating the mechanism: 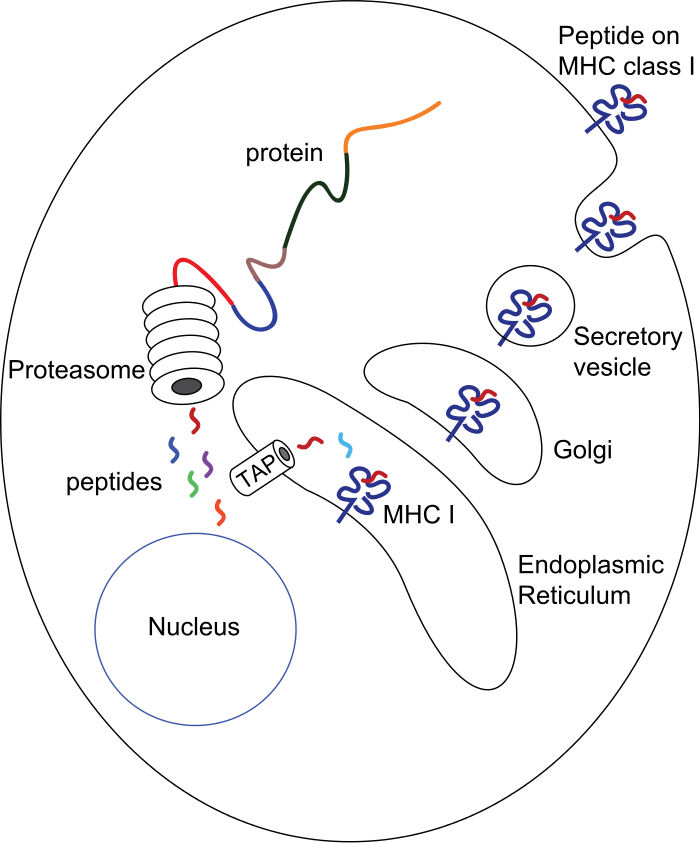 Not the answer you're looking for? Browse other questions tagged virology rna mrna vaccine or ask your own question.

3
The shape of mRNA
19
Do mRNA vaccines cause transfected cells to be killed by cytotoxic T cells?
3
Can the spike protein created by the Covid mRNA vaccines be created independently of the human body, and is there a higher cost to that?
4
How many mRNA strands are in a single dose of the COVID-19 vaccines?
0
How are mRNA vaccines spread across the body?
11
Viral vector vaccines - why doesn't the viral vector get attacked by the innate immune system?