It is known that there are very few individuals having 44 chromosomes, not the usual 46 chromosomes.

One example is a male in China: the first article, the second article.

The other is a female in Turkey, unfortunately the article is in Turkish.

It is claimed in the links that they might reproduce and make healthy children if they mate. So I wonder if this already happened and such a couple is living, or if it would be theoretically possible?

Edit: As requested, here is the Karyotype of Turkish female, which the professor in the video call her HomoNeoSapiens, with Robertsonian translocation between 13 and 14 chromosomes. So, this translocation is different from Chinese Man's translocation, which is between 14 and 15 chromosomes. So in this case they can't breed a healthy children? Gosh, I was about to create a new species :(( 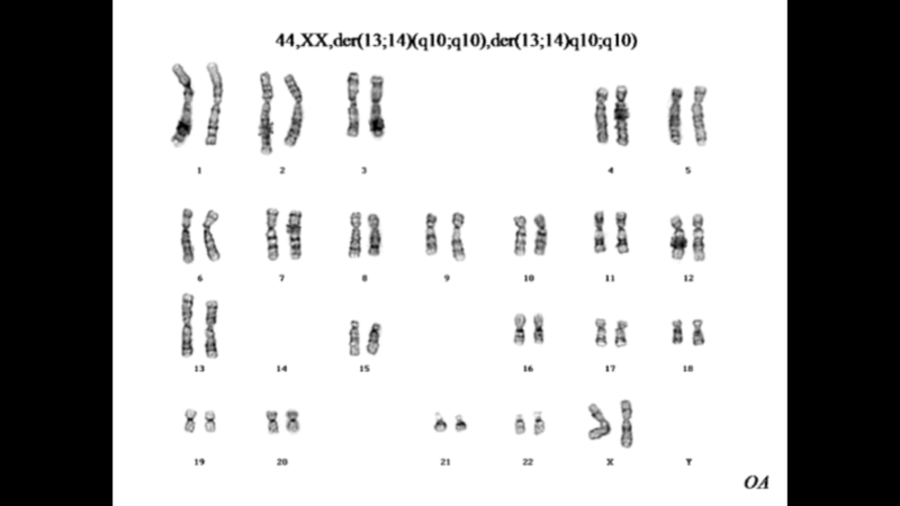 So the genotype of the dude is 44,XY,rob(14,15)(14,15), meaning he's normal because he technically has all the genomic information of a normal human.

If he mates with a normal woman (46,XX), then the resulting progeny will have an extra copy of chromosome 15, resulting in trisomy 15, which is non-viable.

Interesting question. You refer to aneuploidy.

I don't have idea, but I loved to make some calculations. Feel free to edit because there are some very approximative assumptions.

Now, consider that the lost chromosome is likely not really lost, but just translocated on another of the 22 chromosomes. For instance, the individual you refer was having two chromosomes (the 14 and the 15) fused together.

Chances are now that two of the 0.00059% newborns with exactly the same chromosome loss, will mate together.

We are now 7 billions on the Earth, so assume 3.5 billion couples all fertile despite of the age. If we assume also no spatial constraints, so that everyone could mate with every else one on the Earth, there could be no more than 10 couples with the same aneuploid mutation.

Provided the mutation does not affect genes important for reproduction, for instance genes between the two chromosome junctions that get interrupted, this couple could reproduce I guess.

To find that child, chances are now that he/she will have a kariotype done. Quite difficult to find isn'it?

I want to carry answers from soon-to-be-deleted forum to here (I also asked this in Coursera's Introduction to Evolution And Genetics), since I find them valuable. All of them belong to Andrew Wilmoth :

The man has a Robertsonian whole-arm translocation which fuses chromosome 14 & chromosome 15. Essentially all of the genetic material is there, just packaged differently. He could have children whole are phenotypically normal regardless of whether his partner has a normal chromosome complement or a similar translocation.

My Turkish is inadequate to understand the karotype of the woman in the other link.

Persons with translaocations are well known. It is rare but hardly unique. The odds of two such persons randomly meeting each other and mating are probably pretty low. Depending upon each partner's exact karotype there may be no difficulty producing healthy offspring with unusual chromosome complements.

"If they will have make a new species, let's breed them!! Why doesn't science try that? :))"

Because they are people and they might not want to have a child together? Experiments on humans require informed consent. I cannot imagine conducting any such experiment to satisfy scientific curiosity.

A child born of such a voluntary mating would not by itself be enough to be considered a new species. There are a wide variety of chromosomal rearrangements that are known and there is no serious speculation that persons with such karotypes are members of a different species.

It is quite possible that one of the many evolutionary changes that separate humans from chimpanzees evolutionarily is a translocation that fused chimpanzee ancestral chromosomes 2a and 2b to form human chromosome 2. There is strong genetic evidence for such a fusion.

As you surmised, every possible combination of gametes with those two karotypes will result in an aneuploidy... unless there is a mutation which "fixes" the problem.

But the gametes produced by these two individuals would not inherently be expected to result in a problem in an offspring. The F1 offspring would have only 44 chromosomes but likely be normal phenotypically. Any F2 generation produced by crossing two individuals from the F1 would have a problem with possible trisomy 14 which would be expected to be fatal.

The man in China had both chromosomes 15 split and attached onto both chromosomes 14. If a male with 44 chromosomes wants to have children with a female with 46 chromosomes, this will not work. He won't be able to have viable offspring. During mitoses, he will have 22 chromatids and she will have 23. They will not match up and therefore no viable offspring. He'd have to meet someone who was his match and most likely that match is in his family, such as a sister or female cousin, who would have the same chromosomal arrangement as he has. In China, this man is from a family where a lot of miscarriages happened and other family members have variations on these fused chromosomes. They are very inbred for this to have happened. Only a close relative who matches identically to his arrangement would be able to have chromatids that could line up with his. His parents had chromosome abnormalities for this to have happened, so this is an inbred family. This family could go on to produce another species of humans with 44 chromosomes if they kept trying and future generations were stable with no odd arrangements that don't line up.

Not the answer you're looking for? Browse other questions tagged human-biology evolution genetics or ask your own question.

15
Evolutionarily speaking, why do humans have 46 chromosomes
15
Evolution in 37 years, is it possible?
5
Chromosome 2 fusion?

10
Are there dog breeds that are so far apart genetically that they can't produce viable offspring?
2
Will a person with two copies of the same set of chromosomes be normal?
11
Do humans produce rennin?
4
How does better sperm result in more viable offspring?
0
Can a viable embryo develop from the fusion of two egg cells?
0
what is “a group of living things that can interbreed and produce full interfertile offspring”?