First, my background - I'm a newcomer to biology.

What is a gene circuit, and how might I simulate one in a laboratory? Thank you.

I'm just going to give a broad idea of what a biological circuit is. There's definitely more than one way to define them, but hopefully this will give you some idea.

Broadly, biological circuits are reminiscent of electrical circuits in that energy or information flows through the cell. In biological pathways (a more typical terminology), genes in the cell (usually proteins) will use a signal (usually in the form of a chemical compound or a modification of a protein, but sometimes a simple ion or even electrical current (rarely)). The signal then can be transmuted into a different chemical compound or it can even alter a protein so that it functions differently.

Here are a couple of classic examples. The first is the Citric acid cycle (also called the Krebs cycle), discovered in the 1930s. Here you can see that Citrate is chemically transformed into acetate and carbon dioxide and chemical energy in the form of NADH (reduced nicotinic acid dinucleotide). Each step of the cycle has a different compound which is handled by a different protein enzyme. While all the proteins and compounds may coexist in the same part of the cell, there is nonetheless an orderly circuit of chemical energy mediated by the genes of the cell and controlled by the cell as it adjusts the amount of enzymes available for each step of the cycle. 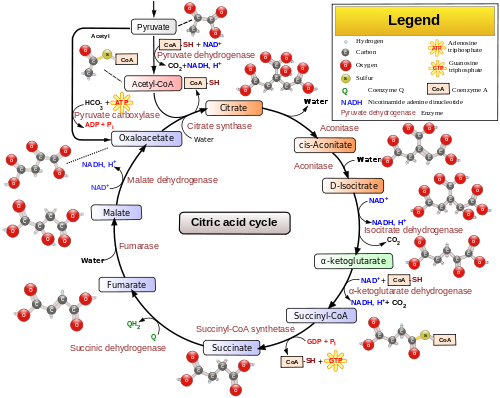 Another example of an entirely different sort of gene pathway works differently but has the same set of concepts. Mitogen Activated Kinases (MAPKs) are proteins which have generally two states an activated state and an inactivated one. As you can see below, an outside signal like high salt osmolarity or a signalling molecule is sensed by a receptor on the cell surface. By some method a MAP Kinase is activated, perhaps by the addition of a phosphate to the surface of the protein or by dimerizing the MAPK. Once activated, the MAPK will then phoshphorylate another kinase, which may activate yet another. Finally a protein in the nucleus will be activated and cause transcription of some target genes. 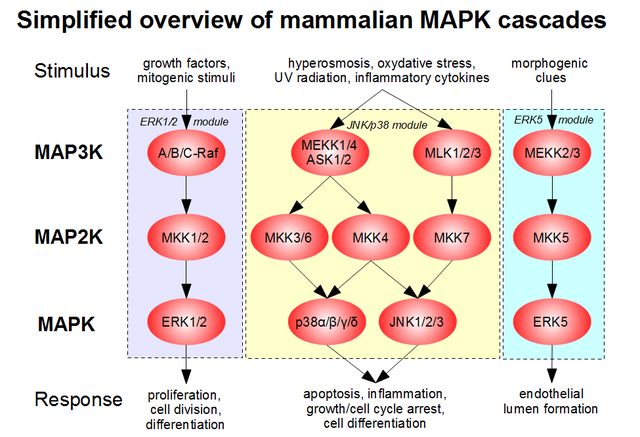 In the latter case, a very small change to the protein costs little energy and information is being transmitted, but by biochemical signals where proteins are modified and affect other proteins. That's a more subtle circuit than in the former case where relatively many individual molecules might be processed by enzymes together.

This hopefully gives you some idea of what a biological circuit looks like. There are many other examples and subtle variations but that's a quick tour.

Experiments involving these pathways are too numerous to mention - individual proteins may be modified, their concentration within the cell can be altered by say mutations in the chromosome, pathway intermediate compounds like Succinate might be added to see how the citric acid cycle responds, isotopic labeled compounds can be added to see where they go in the cell. There's nearly 100 years of experiments here. that's a lot.

Hopefully this will just give you some idea of where to start. Nearly any biochemistry textbook covers these topics in better detail, but then they are often over 1000 pages long!

A genetic circuit can be likened to electrical circuits, except rather than switches, resistors, wires, etc., you use promoters, ribosomal binding sites, coding sequences, repressors, etc. - This will get you well acquainted with the new jargon around bioengineering: http://parts.igem.org/Main_Page

7
How to map the Gene name to its Gene Symbol?
2
Are there more descriptive ways of naming genes and gene interactions?
2
Help reading gene markers
23
120-year-old gene regulation problem independently solved by a computer. How?
2
Why is a gene for a fluorescent protein used rather than one for an enzyme that produces fluorescent molecule?
3
How do gene locations change during crossing over events?