In graphs of survivorship curves, I'm seeing that the Type II curves are straight lines, and the supplementary text says that the mortality rate is constant (i.e. the slope of the line is constant). However, it's also clearly stated that the y-axis is a logarithmic scale, which means that the original Type II curve is exponential: $$\ln y=-rx+b$$ $$y=Ae^{-rx}$$

This implies that the real mortality rate is not constant, but changes as $$y'=-Ar(e^{-rx})$$ How are we defining the word rate, anyway?

There are two quantities you should be careful not to mix up.

(In my opinion this usage is careless; they aren't rates, but just numbers. Compare: there is a distinction between travelling 10 miles in an hour, and travelling at 10 miles per hour.)

$q_x$ can also be thought of as estimating the probability that someone who is age $x$ will die before age $(x+1)$. It is therefore sometimes also called the "Age-Specific Probability of Death". Notice that it is bounded between 0 and 1.

(Probabilities can't be lower than 0 or higher than 1; and the fraction dying has to be somewhere in between "none of them" and "all of them"!)

Here's an example survivorship curve, on a regular plot, I made for constant $q_x = 0.1$. 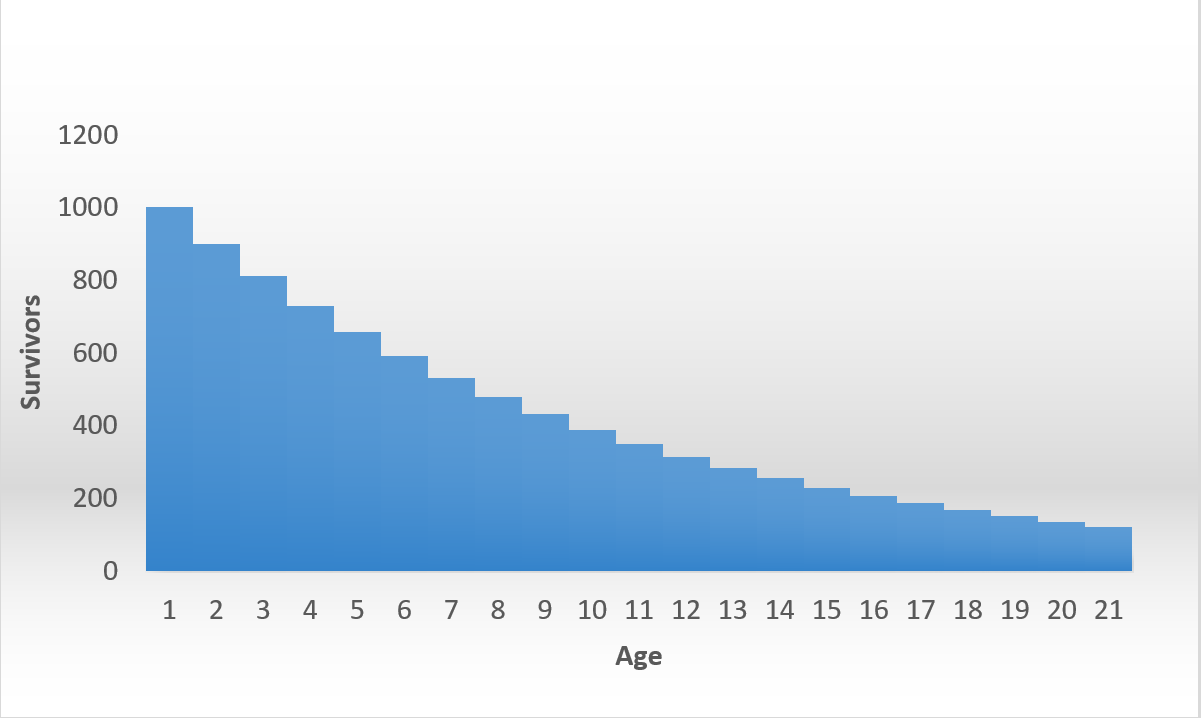 This much should be enough to answer your question. But, for completeness...

I complained about calling $d_x$ the death rate. That's because rates have a unit of $time^{-1}$ ("...per second", "...per hour" etc.) Of course, dividing $d_x$ by the length of the interval, does give you the average death rate over the interval. And,

(For instantaneous rates to be useful, we have to "smooth-out" the survivorship curve instead of letting it be a stepped curve. If it was stepped, then the slope would just always be horizontal or vertical.)

This brings us to another quantity: the "Force of Mortality":

The Force of Mortality is unintuitive ("per-capita" death rate? - but everybody only dies once!) but the formula is coherent. The point of having a "per-capita rate" is to enable comparison between cohorts of different sizes, or the same cohort at different ages when it was bigger vs. smaller, and so on; in general the idea is that death rate has something to do with the number of members, but also something to do with the condition of each member, and $\mu_x$ is trying to get at the latter. It can be visualized as the slope of the survivorship curve (multiplied by -1 to make it positive), divided by the height of the survivorship curve. 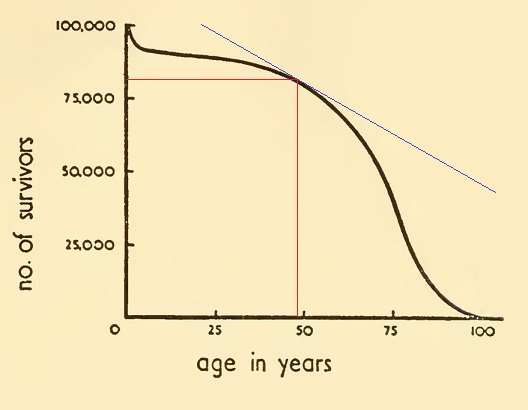 But they are distinct. It is the $time^{-1}$ dimension, and the fact that time units are interchangeable, which makes the difference.

But suppose the rate of death at this instant is "60 deaths per hour". That's the same thing as saying it's "1 death per minute" or "525600 deaths per year". There's no implication that that many people will in fact die, because there's no implication that the rate will be kept up for the whole year. If this particular death rate were held constant as long as possible, then the cohort would all be dead in exactly an hour and then the rate would then hit 0. The instantaneous death rate can be as high as you like; it just can't stay high forever.

Although the absolute death rate can't stay high forever, the per-capita death rate ($\mu_x$) can. That's what happens during constant $\mu_x$ (exponentially decreasing $N_x$), for example. The reason why this is not paradoxical is that the slope ($-N^{'}_{x}$; the numerator) is constantly decreasing; it's just that so is the height ($N_x$; the denominator).

The Force of Mortality $\mu_x$ has also sometimes been referred to as the "mortality rate". The equivocal use of language is unfortunate. It is also, especially in reliability engineering, known as the "hazard rate".

$q_x$ and $\mu_x$ have often been conflated, at least in gerontology (with which I am most familiar). But they are not the same. The first estimates a probability, and is bounded between 0 and 1. The second is not a probability, and has no upper bound.

One way they have been conflated is with the "Gompertz equation".

A Type II Survivorship Curve is one which is decreasing exponentially. When this is the case, both $q_x$ and $\mu_x$ are constant. We would call such a species "non-aging" or "non-senescing": your age makes no difference to your vulnerability.

But many species do age.

Benjamin Gompertz proposed that for many species including humans $\mu_x$ grows exponentially throughout adulthood:

Whether or not $\mu_x$ follows such a law indefinitely is an empirical matter. (It's actually debated whether it decelerates in late life, and if so why.) But notice that $q_x$ couldn't possibly grow exponentially forever, since $q_x$ couldn't possibly ever exceed 1. And yet, due to the conflation, in recent times it has often been in terms of $q_x$ that the Gompertz equation has been presented and discussed.

Unfortunately, as far as I know the literature (both professional and pedagogical) is sorely lacking in treatments which are both intuitive and accurate!

Peter Medawar's "The Definition and Measurement of Senescence" (Chapter 1 in The CIBA Foundation Colloquia on Ageing, Vol. 1) is probably still the best introduction to the rationale behind why we care about survivorship curves and mortality, from the perspective of biogerontology. Medawar gives the correct definition and formula for $\mu_x$ (though he doesn't stress its distinction from $q_x$; indeed, he doesn't mention $q_x$ at all).

The distinction between $q_x$ and $\mu_x$ is discussed in Gavrilov and Gavrilova's The Biology of Life Span: A Quantitative Approach, as well as in some of their papers. They present the correct forumula for $\mu_x$, but do not really try to explain it.

This is a statistical property of the curve - in time to event analysis (which is what a survivorship curve is), a constant hazard (the instantaneous probability of an event occurring in time t given it has not occurred already) will yield an exponentially distributed survival function. When graphed on a log axis, this function looks like a straight line.

Not the answer you're looking for? Browse other questions tagged ecology mathematical-models demography or ask your own question.

4
Does finite rate of increase depend on mortality of individuals in a population?
5
Calculation of the bacterial growth rate from a spectrophotomer growth curve