Is there a single protostomate common ancestor that has pseudocoelomate structure?

I think about 15 years ago I saw a new classification system that placed Plathyhelminthes worms with Annelids and Mollusks into a superphylum (or other systematic clade) Lophotrochozoa, while Nematode worms were grouped with Arthropods into a clade Ecdysozoa. This would suggest that Arthropods and Annelids did not have a common coelomate or pseudocoelomate ancestor (in the past believed to be a nematode), or that if they did, then flatworms evolved FROM the pseudocoelomate ancestor. What are the current views of the characteristics of the Protostomate progenitor? It looks like Roundworms may have diverged from a flatworm like ancestor, and then given rise to current roundworms and Arthropods, while Annelids and Mollusks may have arisen independently from a flatworm ancestor. It would violate something I was taught in evolution (as a loose rule) that you don't usually call features like a coelem "homlogous" if they arose independently which would be the case for the Mollusk/Annelid Coelem and the Arthropod coelem. Of course, it is possible since the genetic changes that allowed both coelom may have existed for some other purpose prior to divergence, but been activated by other similar evolutionary phenomenon, or if a gene became deactivate (for example, if a gene were deactivated in mammals making scales for instead of hair those scales would still bear homology with reptile scales. 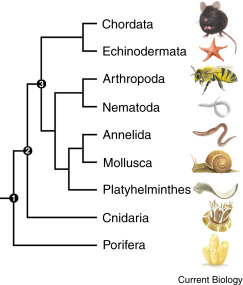 Browse other questions tagged evolution phylogenetics cladistics or ask your own question.