Is Signal Transduction Unidirectional from the Stimuli to the Final Receptor?

The question might not be a very good one because I don't have any background in biology. I would appreciate any answer or guidance. Thanks in advance.

I'll just use one example, the retina, for a proof by contradiction.

In the retina, the principle "forward"/unidirectional pathway would be from photoceptor cells (rods/cones) to bipolar cells (BC) to retinal ganglion cells (RGCs/GCs). RGCs are the projection neurons whose axons make up the optic nerve from eye to the rest of the brain.

However, there are other cell types in the retina as well that convey information horizontally and in reciprocal/feedback directions. Here are some examples depicted in a review paper: 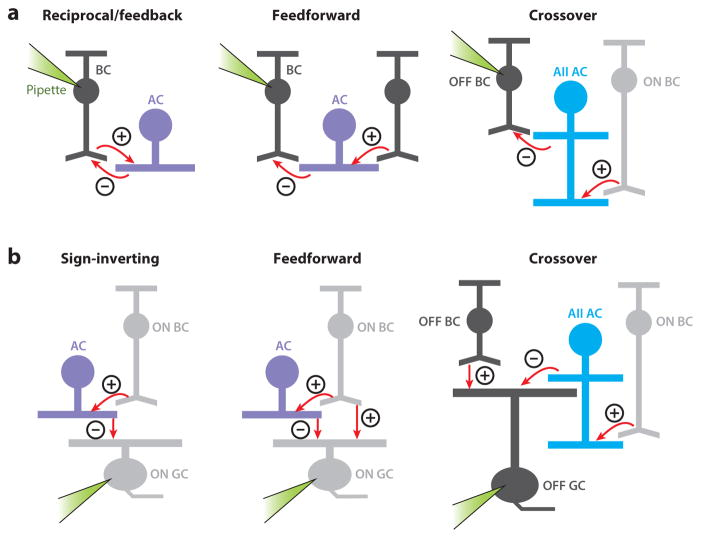 In (a), on the left, you see connectivity between a bipolar cell (BC) and an amacrine cell (AC), a type of interneuron in the retina. The AC is excited by the BC but also inhibits the BC; this is not unidirectional. In the middle, you see a horizontal connection between two BCs through an AC. On the right, you see another horizontal connection among BCs, in this case BCs of different types, through an AC.

Horizontal and feedback connectivity patterns are ubiquitous in the mammalian nervous system; you'll find them everywhere you look, so it's not reasonable to expect signal transduction to be unidirectional.

I'll add that it is not straightforward to determine the "strength" of signals in the nervous system, especially when inhibition is involved. For only excitatory connections, you might measure the excitatory potential (voltage change) at the cell body as a measure of "strength", but this is complicated because this strength depends on lots of other things: you can have nonlinear interactions in dendrites such that multiple signals sum linearly, sublinearly, or supralinearly; the rate of presynaptic activation matters, so even a "strong" synapse may not be particularly influential if the presynaptic neuron rarely fires, etc.

For inhibition, it's even more complicated, because many inhibitory potentials involve shunting and may not affect the membrane potential at the soma at all unless they are paired with an excitatory input. It's possible to have an inhibitory input so strong that a cell can effectively never fire, and yet the effect of that inhibitory input alone has no detectable influence on the cell's voltage, it merely provides a shunt that fixes the membrane potential at that voltage.

Not the answer you're looking for? Browse other questions tagged molecular-biology cell-biology neuroscience neurotransmitter cell-signaling or ask your own question.

6
How does the brain know where a signal came from? What is the addressing system
10
How does the brain avoid feedback loops?
5
Why does a "cascade" of events happen during signal transduction?
6
What would happen if you "rewired" your eyes with your nose?
2
How do different sensory stimuli differ in nerve signal?
6
How can calcium be a kept as a local signal in the cytoplasm?
1
Exact definition of 'convergent' and 'divergence' in cell signalling?