What prevents non-aminoacylated tRNA from binding to mRNA on the ribosome and disrupting protein synthesis?

Specific aminoacyl-tRNA synthetases catalyse a reaction in which a transfer RNA molecule with a given anticodon is covalently attached to its cognate amino acid (aminoacylated).

What factors favor the binding to the ribosome/mRNA of an aminoacylated tRNA molecule, rather than one without an attached amino acid?

Is it exclusively the presence of an exposed OH group on the end of the non-aminoacylated-tRNA molecule or is it possible that the tRNA molecule undergoes some degree of conformation change when the amino acid is enzymatically attached that makes the anticodon have a greater affinity for the codon?

The codon-directed non-enzymic binding of tRNA (aminoacylated or not) to the A-site of the ribosome is much weaker than the (normal) binding of aminoacyl-tRNA complexed to EF-Tu/EF-1, the tRNA-binding elongation factor (which discriminates against non-aminoacylated tRNA). Hence it is unable to compete effectively with the latter to disrupt protein synthesis.

The stages in protein biosynthesis relevant to this question are shown below.

In stage 1 tRNAs are aminoacylated with their cognate amino acid in a reaction catalysed by a specific aminoacyl-tRNA synthetase.

In stage 2 aminoacylated tRNAs (except the initiator tRNA) are recognized by a single elongation factor (EF-Tu in prokaryotes, EF-1 in eukaryotes) and form a complex with it and GTP. The elongation factor will not form a complex with non-aminoacylated (also referred to as ‘deacylated’) tRNA, and this has been shown to be caused by structural differences from aminoacylated tRNA. This latter is particularly pertinent to the question, and will be discussed in more detail below

In stage 3 this complex binds to the A-site of the ribosome in a codon-specific manner. However it is important to understand the strength of the interaction between the elongation factor and the A-site of the ribosome compared with the tRNA–anticodon interaction alone. The latter is, of course, necessary for accurate protein synthesis, but may be regarded as preventing (or more strictly delaying) dissociation of the complex.

Basis of the discrimination against non-aminoacylated tRNA

The discrimination occurs at the stage of binding by EF-Tu/EF-1. What is known about its structural basis? This appears not to be merely recognation of the amino acid, but involves indirect effects on the structure of the tRNA and its recognition by EF-Tu, as is discussed in the 1996 paper of the Aarhus group that elucidated the structure of the aminoacyl-tRNA.EF-Tu complex. I quote:

Deacylated tRNA binds to EF-Tu-GTP with an affinity which is approximately four to five orders of magnitude lower than that of aa-tRNA. Thus, the aminoacyl group is a primary discriminator in the ternary complex formation. It is impossible to explain this by the direct interactions with the aminoacyl group alone. Other structural features of aa-tRNA must contribute to the affinity.
There has been a long-standing research on the conformational changes of tRNA upon aminoacylation. Fluorescence studies… have indicated that conformational changes occur upon aminoacylation, though in a diverse manner among the individual acceptors.

One precise structural difference is discussed:

It is evident that aminoacylation of tRNA restrains the conformational space of the terminal A76 considerably. Compared to the crystal structure of the ternary complex, the residues A73 through C75 of deacylated tRNA-Phe (PDB entry code 4TNA) are in an equivalent conformation, though slightly shifted in their position relative to the acceptor helix. However, the terminal A76 residue in deacylated tRNAPhe adopts a conformation which is impossible in the phenylalanylated form (fig 7). 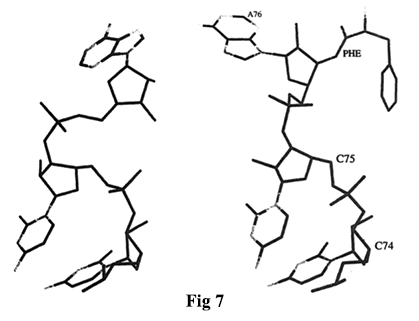 It can be seen that the residues 73–76 are near the 3′ end of the tRNA where the phenylalanine (Phe) is attached.

In some bacteria, uncharged tRNAs have been shown to bind to the ribosome. In fact, that binding is responsible for the "stringent response" a mechanism that signals that the cell is running low on amino acids1,2.

RelA is a ribosome-associated (p)ppGpp synthase which senses the presence of uncharged tRNAs that accumulate at the ribosome A site as a result of amino acid limitation. The presence of the uncharged tRNA acts as an effector molecule, stalling protein synthesis and activating RelA which then synthesizes pppGpp and ppGpp by phosphorylation of GTP or GDP using ATP as the phosphate donor (Haseltine and Block, 1973; Sy and Lipmann, 1973).

A similar mechanism has been proposed to operate in eukaryotes1,3,4.

It has been proposed that discrimination between the charged and uncharged tRNA by Gcn2p occurs via an analogous mechanism of RelA protein activation as observed in E. coli by the presence of uncharged tRNA at the decoding (A) site on translating ribosomes. The activation of Gcn2p by uncharged tRNA requires its association with the ribosome via its C-terminal region and also, interactions between the N terminus of Gcn2p and the Gcn1p–Gcn20p protein complex which is also associated with the ribosome.

We have argued previously that uncharged tRNAs bound to the decoding (A) site of the ribosome and base-paired with their cognate codons in mRNA activate GCN2 (15).

Not the answer you're looking for? Browse other questions tagged biochemistry translation ribosome trna or ask your own question.

25
What is the criticality of the ribosome binding site relative to the start codon in prokaryotic translation?
8
Redundancy of the genetic code
17
What is the explanation for the smaller number of tRNA than codons?
6
Non-ribosomal peptide synthesis: why Glutathione cannot be produced by the ribosome?
4
How does aminoacyl-tRNA synthetase recognize different tRNAs?
0
Does translation have a way of preventing mismatching between mRNA codons and tRNA anti-codons?
3
Why did translation develop a specific codon for initiation?
2
The genetic code and the effect of point mutations on proteins
5
Does the ribosome have protein kinase activity?
1
Aminoacyl-tRNA synthetase and the degeneracy of the genetic code