Do insects with compound eyes have depth perception?

Do insects with compound eyes have depth perception? They fly as if they do, but their eyes are so close together it seems like the image would be 2 dimensional.

Do insects have depth perception? Depth perception of some sort is important to an animal who has to catch its prey; fortunately most insects have it to a degree. Although they do not have binocular vision that can be compared with man's, it is true that when one eye is covered their depth perception is markedly affected. The criterion of depth seems to depend on the angle of simultaneous stimulation of two corresponding points of the retina of the two eyes.

However it does not mention compound eyes specifically.

There may be other methods of obtaining a perception of distance rather than the binocular vision seen in humans. This paper suggests that there is 'clear evidence' that some insects perceive depth by moving their head to artificially create parallax, which they can then recognise and interpret as depth and distance. They cite the Praying Mantis as an example, which does have compound eyes.

The sense of depth is required to us to orient ourselves in a 3D world. Insects do orient themselves in the exterior 3D world, thanks to the ability to detect the plane of sunlight polarization, that is used as a navigation compass in foraging expeditions and when coming back home.

You can find a good review on Current Biology (Krapp 2007) and a lecture about insect vision from Cornell University. 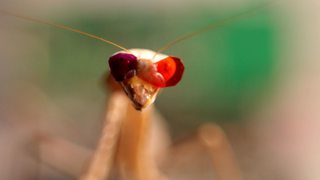 Stereopsis = the perception of depth and 3D structure obtained from visual info from 2 eyes.

Vertebrates (including humans and all primates) use stereoscopic vision to perceive depth. Each eye sees slightly different images based on their side-by-side orientation, which allows the brain to "calculate" the difference and generate our perception of depth. This is typically accomplished in organisms with 1+ billion neurons in the brain.

Nityananda et al. (2018) have confirmed for the first time that an invertebrate (with only ~1 million neurons) also is capable of stereopsis.

Specifically, their work showed that instead of using correlations of image contrast for stereopsis...

In other words, they propose that mantids are looking for changes in the light patterns over time -- basically, they're only looking for movement.

You can read their paper here.

theforestecologist♦theforestecologist
26.5k1010 gold badges102102 silver badges188188 bronze badges
$\endgroup$
Add a comment  |
0
$\begingroup$
Want to improve this post? Provide detailed answers to this question, including citations and an explanation of why your answer is correct. Answers without enough detail may be edited or deleted.

Do insects with compound eyes have depth perception? The compound eye structure involves many lenses mounted around a dome where the image is redundant yet slightly modified by the position of the lens on the dome surface. That also provides depth perception in addition to the normal binocular vision as they have two eyes. This is a random guess without researching and reading what others have studied about the subject matter.

Not the answer you're looking for? Browse other questions tagged zoology entomology vision eyes or ask your own question.

5
Does coloring affect the perception of depth?
16
Are 2 eyes necessary for 3D vision?
8
Are there animal species that sense infrared light with their eyes?
15
What insect is this? (Central Africa)
1
How many ommatidia does a honeybee have?
8
Do animals with their eyes ~180 degrees apart have depth perception?