Do color-blind people have more rod cells in their retinae than the normally sighted?

I am color-blind, and I have observed instances where I was able to see better in low light than other people. For example, most often when I read at night or in low light, people have wondered how I'm able to see in the low light condition. I also do not turn on the light most of the time when I walk around the house at night, whereas other people in the house often cannot see well enough to walk without turning on the light. I also recently noticed that my favorite theme (for VS Code), is actually meant for people who work in low light conditions or at night. But they have also noted that it is suitable for people with color blindness.

All these occurrences made me wonder whether color-blind people have more rod cells than average people, and hence can see better in low light too.

Short answer
There are not many studies that have counted rods and cones in the human retina, let alone compared healthy retinas with those of color blind people. Yet direct evidence, as well as circumstantial evidence, point toward a degeneration of cones, rather than substitution of cones with rods.

Background
There are a few points of importance. For one thing, as Fig. 1 shows, rods outnumber cones by a factor of 20 in the human retina (Purves, 2001). Secondly, their distribution is very different, cones being clustered in the center of the retina (the fovea) and rods more eccentrically (Fig. 1) (Wells-Gray et al., 2016). Lastly, and most importantly, the scarce studies out there that actually counted photoreceptors in human retina of colorblind people found that deviant photoreceptor counts were the exception rather than the rule. In those rare cases where a loss of cones was found, it manifested itself as areas in the retina lacking photoreceptors altogether, and not by a substitution of cones by rods (Caroll et al., 2004).

The patchy photoreceptor loss found by Caroll et al. (2004) shows that degeneration can be a hallmark of color blindness, but no evidence is yet found to support de novo appearance of rods.

More circumstantial evidence comes from the facts above that rods appear eccentrically, whereas cones are clustered foveally. So any appearance of rods where the cones are lost is not a parsimonious assumption. Secondly, because rods are so much more abundant, patchy increases in rod numbers replacing cones would, likely, not add noticeable differences in night vision. Lastly, rods wire with rods (to amplify light), and cones with cones (for color vision), so substitution of patches of cones with isolated functional circuits of rods would be quite unlikely to occur in my opinion secondarily to degeneration of cones, as the retinal circuitry is quite complex. 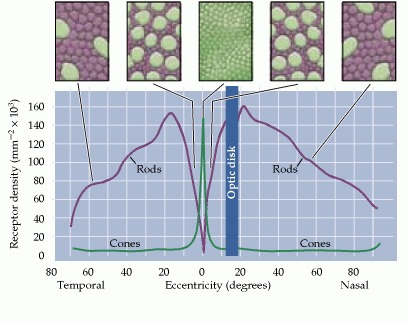 Fig. 1. Retinal distribution of rods and cones. Cones (left) are clustered in a densely packed fovea. Rods are more abundant overall and their distribution is reversed from the cones. source Purves et al. (2001)

Not the answer you're looking for? Browse other questions tagged neuroscience neurophysiology vision light color or ask your own question.

69
What is the evolutionary advantage of red-green color blindness?
0
Are color-blind carriers partially colorblind?

1
Why are trichromat cone cells unable to sense ultraviolet and infrared radiation?
4
If people with colorblindness lack one type of cone cells, shouldn't they be unable to recognize one particular color?
3
Why don't we have more cone cells (bigger fovea)?
2
Why is it necessary to have both cone and rod cells in the eye?
3
What determines the shape of the center-surround receptive fields of retinal ganglion cells?
3
Trying to understand reduction of color dimension in colorblind case
5
Do Colorblind People Have Stronger Sensitivity in Their Other Remaining Cones?
0
Are color-blind carriers partially colorblind?