Since color-blindness passes along an recessive gene in the X-chromosome, women are rarely affected, while men are affected more frequently. Women with one copy of the color-blindness gene are said to be "carriers". Women also have something called a "genetic mosaic", due to X-inactivation in the early stages of development. However, which X-chromosome is inactivated depends entirely on chance. My question is, what happens if some of the cone cells in the eye contain a copy of the X-chromosome with the color-blind gene? Will the woman be partially colorblind? I read somewhere that the woman's brain learns to ignore signals from the cone cells that are affected. Is that true? 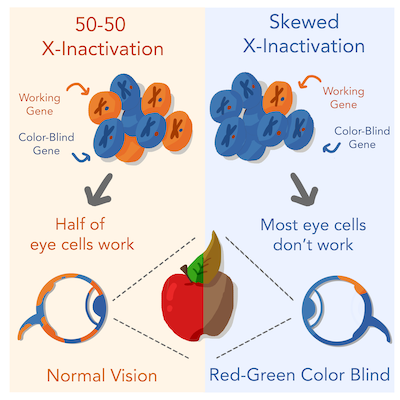 As mentioned in this article,

As we [women with the recessive allele] have several millions photoreceptors (cones) which are responsible for our color vision, the defective signals are in a way oversteered by the correctly working ones.

Edit: In the original post, I also included a follow up question about why color-blindness is still present in the gene pool, but that is answered in this question, so I removed it.

Looking at the literature, I find the following passage in a review of the genetics of colorblindness:

Females have two X-chromosomes, and can either be homozygous or heterozygous for the X-chromosome opsin allele. If homozygous, they are dichromatic; however, females who carry both an allele for an L opsin and one for an M opsin have the equivalent of normal human color vision, having both L and M cones because the process of X-inactivation segregates the expression of the L and M opsin genes to separate populations of cones. The significance of this is that in trichromatic female squirrel monkeys, the difference between L and M cones is solely determined by the stochastic choice of which X-chromosome is retained as the active one. Variation in L:M cone ratio in female squirrel monkeys is similar to what is seen in human males with normal color vision. In squirrel monkeys the variation has been attributed to the stochastic process of X-inactivation, influenced by the number of cells present at the time of activation and other random factors in the inactivation process (Jacobs & Williams, 2006).

Boiling this down: X-inactivation happens at a local enough scale that eyes of heterozygous females have active versions of both normal and mutant opsin genes. So they will still see color "similar to what is seen in human males with normal color vision".

Note of course that people with an XX complement can have better possible color perception than XYs, as they have the potential for tetrachromacy:

Here is a study specifically on color perception in heterozygous women that may answer further questions.

So there are some differences between color perception of heterozygous XX vs XY, they're just not colorblind per se.

ZO-Bro, your second paragraph considers why colorblindness stays constant in the gene pool. Whether it is an advantage or not in some situations, if it is not really being selected for or against, it will probably hang around indefinitely in roughly the same frequency. Nearsightedness would probably disappear FROM THE POPULATION if we lived on the savanna with only spears and stones.

Not the answer you're looking for? Browse other questions tagged genetics vision sex-chromosome color or ask your own question.

69
What is the evolutionary advantage of red-green color blindness?
7
Do color-blind people have more rod cells in their retinae than the normally sighted?
2
Question about manifestation of an X linked disease (homework help)

3
Hardy-Weinberg Color-blind
2
Recessiveness of allele for protection of organism
7
Colorblindness in females and random X chromosome inactivation
29
Is it possible that by mutation a human could see infrared or other 'colours'?
3
Trying to understand reduction of color dimension in colorblind case
6
Why is Turner syndrome a problem?
5
Why did we lose our fourth type of cone cell (in the eye)?
2
Question about manifestation of an X linked disease (homework help)