Why do most mammals have long snouts?

It seems like most mammals, e.g. dogs, have long snouts. My pet dog's snout would seem to me like an evolutionary disadvantage, since her canine teeth are way out at the end of her jaw, which acts as a force-reducing lever. I suppose the lever does increase the jaws' range of motion and possibly allow the jaw to snap shut more quickly. For an herbivore such as a horse, I don't see any advantage to the long snout. It doesn't need to snap its jaws shut rapidly, and it doesn't need to wrap its mouth around anything very large.

Is there a mechanical reason for the long snout, or is the evolutionary advantage due to some other factor such making the nose have enough surface area to give a sensitive sense of smell?

When asking why a particular group of organisms, such as mammals, has a particular feature, such as a long snout, you must be careful about the hypothesized reasons. While the other answers here propose various adaptive reasons, they do not actually explain the presence of the long snout in the majority of mammals.

Instead, you have to look at the evolutionary history of mammals and vertebrates. Modern mammals have long snouts because they inherited the trait from their earliest mammalian ancestors, such as Morganocodon. In turn Morganucodon and other early mammals had long snouts inherited from their synapsid ("reptilian") ancestors like the sphenacodontid (see the first phylogenetic tree below). Why did the synapsids have long snouts, then? Because the earliest tetrapods like Ichthyostega had snouts. Before that, the lobe-finned fishes like Eustenopteron and Panderichthys had the elongated snouts (see the second phylogenetic tree below). 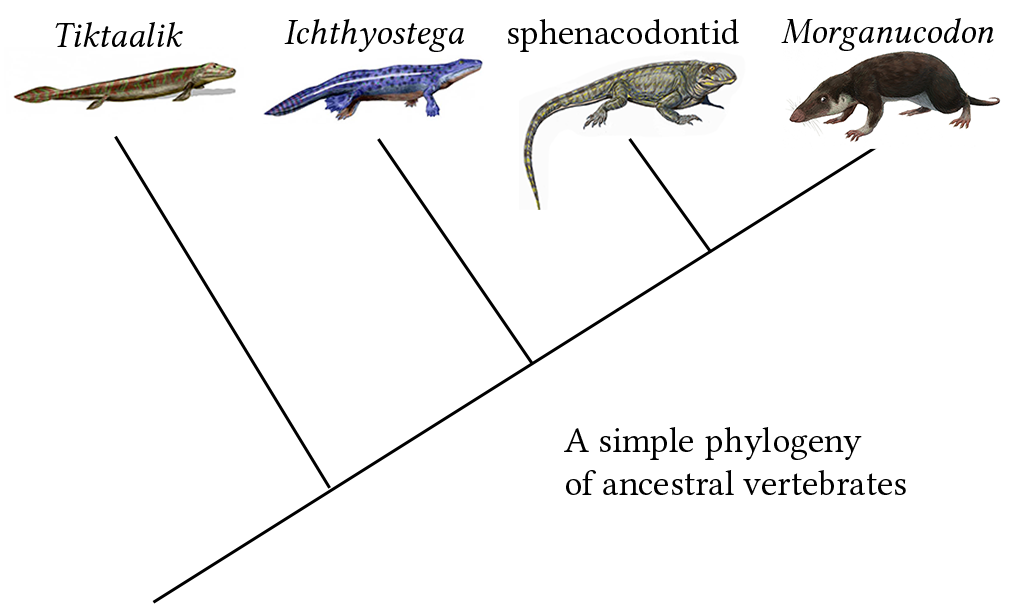 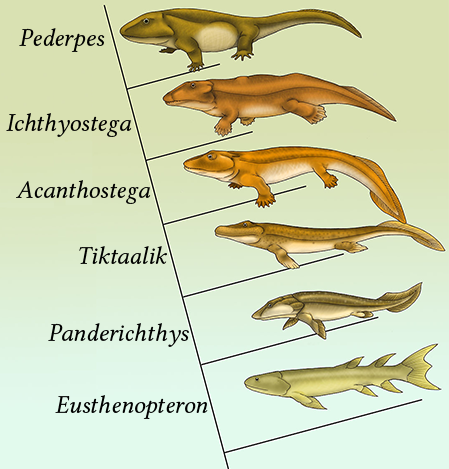 Of course, the mammalian snouts were modified through natural selection to take on various shapes and sizes (or become greatly reduced) for various (presumably) adaptive reasons, as suggested by the other answers.

When using phylogenetic trees to study the adaptive changes of particular traits (such as snouts), a researcher can first use comparative techniques like phylogenetically independent contrasts to tease out the effects of inheritance due to common ancestry. See for example Felsenstein, J. (1985) and the many, many papers that cite this one.

Obviously there is an evolutionary advantage for those animals which has a long snout/muzzle. That is why they are still around.

For carnivores the canine is the most important tooth and it is positioned strategically at the front corners of the jaw. Canines are meant to pierce and is essential for holding on to the prey and preventing from escaping. They are also essential for tearing flesh.

Lower jaw or the mandible is a class 3 lever. The lesser mechanical advantage is compensated by the extremely powerful muscles. Since the muscles are closer to the joint or fulcrum the movement produced by the muscles are amplified at the outer end of the jaw allowing for wider opening of the mouth. Since the canines are sharp and long there is enough force to pierce.

Crocodiles which are not mammals also have long snouts.

In short the longer snout/muzzle in different animals developed due to evolutionary advantage based mainly on diet.

You say "snout" but you might more specifically mean "muzzle" if you're focusing on the teeth aspect. Ram Manohar M hypothesizes some good reasons that make sense but for some other examples of snouts, here's a fun link that describes a few uses:

I'm not a scientist, so this is my best guess:

Since humans are an uncommon exception among mammals for lacking snouts, we should find the benefits of a snout by looking at other ways that humans are unique among animals, enabling us to not have snouts.

I think the answer is the opposable thumb; animals need snouts because it does for them what thumbs do for humans.

For most animals, their mouths are all they have to manipulate their environments — it's what they use to lift, carry, or break objects, as well as hunt and fight. Humans have thumbs, as well the ability to use tools, to do all these things.

A snout provides more surface area for biting or carrying, better dexterity to grasp between bones, rocks or other obstacles, a larger mandible for powerful jaw muscles to attach to. It also places the mouth in front the eyes rather than below them, which should make it easier for an animal to see what it's about to pick up with its mouth. I think that all these things would suggest that an animal with a shorter snout is at a disadvantage.

Another explanation for snouts that I've seen is that hairy animals cool off through their mouths rather than through their skin, and a snout gives them a larger mouth and more surface area to do so.

Long snouts may have an advantage in long noses. A longer nostril could give more room for olfactory neurons and allow for a more sensitive sense of smell. Animals would rely on smell to find prey or avoid predators, so better smell would give better advantage. The only predators I can think of off the top of my head that would have short snouts would be big cats, but lions and tigers have more prominent snouts than house cats.

10
Do male mammals other than humans have nipples?
12
What hair do aquatic mammals have?
7
Why are recombination rates increasing in mammals?
61
Why don't mammals have more than 4 limbs?
2
Why only female mammals have well developed mammary glands?
6
Do mammals and birds have a common warm-blooded ancestor?
1
Why do mammals rarely have eyespots?