How do viral envelopes contain molecules coded for by viral genes when they are derived from the host cell's plasma membrane?

I have been studying viruses from " Biology: A Global Approach " by Campbell, Urry, et al. Regarding viral envelopes in animal viruses, the textbook writes, " ..the viral envelope is usually derived from the host cell's plasma membrane, although all or most of the molecules of this membrane are specified by viral genes."

I don't have access to the book, so I can't be sure how they meant that statement, but most likely "all or most of the molecules" in the lipid membrane excludes the lipid molecules themselves. One of the defining characteristics of viruses is that they don't do their own metabolism. Even if they did, viral genes could only specify the enzymes for lipid synthesis, and these wouldn't be included in the membrane.

However, viruses often DO manipulate the host cell's lipid metabolism. From this review of Lipid Interactions During Virus Entry and Infection:

So, membranes in the cell are composed of different types of lipids, and they aren't equally good for making virus membranes. Some viruses have been shown to upregulate production of the lipids they need, so in that sense those lipids are products of virus genes. That's a bit of a stretch, though, imo.

For proteins in the viral membrane, they aren't necessarily all glycoproteins, though it looks like most are. M1 and M2 membrane proteins in influenza aren't glycosylated, for example.

Here's an image from another review showing virus budding through the plasma membrane: 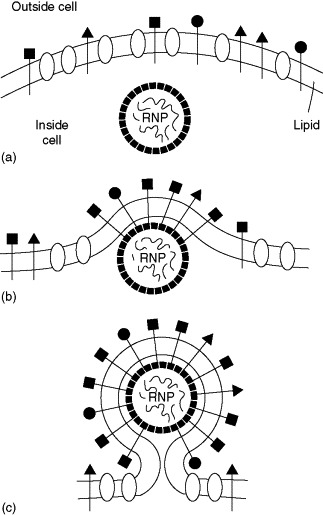 One kind of virus budding. Viral glycoproteins, inserted into the cellular membrane at the endoplasmic reticulum and processed through the Golgi to the plasma membrane (see Figure 3), associate with the assembled viral nucleocapsid. The direct association pictured here is characteristic of togaviruses. For other viruses, possessing helical nucleocapsids, the association is mediated by a peripheral membrane protein. Cellular membrane proteins are excluded from the envelope of the mature virion. This may occur during assembly, as pictures, or by prior formation of a viral membrane patch (or raft), before the nucleocapsid arrives at the membrane.

In this image, you can see the host membrane proteins (the white ovals) being excluded from the patch where the viral proteins (black shapes) accumulate and which later envelops the nucleocapsid. This process is likely what your textbook is referring to.

1
Is a virus a poison?
5
Is viral single-stranded RNA in the absence of reverse transcriptase infectious?