Why do some amino acids have more synonymous codons than others? 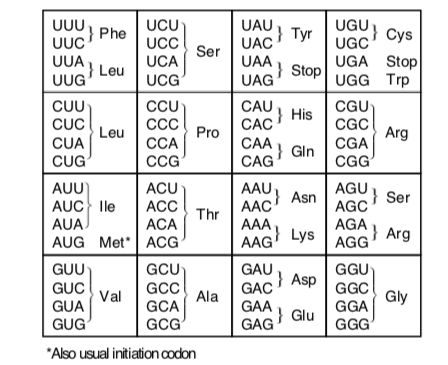 In the standard genetic code (above), tryptophan and methionine are coded for by a single codon, other amino acids such as phenylalanine by two codons, isoleucine by three codons, and some by four or even six codons.

Is there any explanation for this difference in number?

One possibility that occurred to me is whether, amino acids which are more crucial to a protein’s structure tend to have more synonymous codons?
For example, Tryptophan is coded by a single codon, TGG, whereas Proline is coded for by the four codons, CCA, CCG, CCC, and CCT. A single mutation would always change tryptophan, but would have a 1 in 3 chance of leaving proline the same. Is this because a change in proline would be more likely to have a deleterious affect on a protein than a change in tryptophan, and for this reason there has been evolutionary selection to provide proline with more codons?

N.B. This is a different question from the previous general one on the evolution of the genetic code.

Consideration of the ‘importance’ argument

In some cases it is difficult to say whether changing one amino acid would have a more deleterious general effect than changing another, but one can put forward several examples in which the number of synonymous codons for different amino acids does not support any relationship to structural or functional importance in proteins.

• The fact that there is only one codon for methionine, which is of paramount ‘importance’ as it is essential for the initiation of protein synthesis.

• The difficulty in arguing that arginine (6 codons) is three times more ‘important’ than lysine (2 codons), when these amino acids are equally abundant in E.coli and lysine is involved in the catalytic function of numerous different types of enzyme.

• The difficulty in arguing that the non-catalytic leucine is ‘important’ enough to have 6 codons, when there are another 3 for the related isoleucine and a swathe of other amino acids with aliphatic side-chains, mutation to which may be allowable.

• The fact that unique indole ring of tryptophan (1 codon), as well as providing a large aromatic side-chain, plays an essential catalytic role in a variety of enzymes such as oxidases.

Is selective pressure to minimize amino acid changes likely to have been important in the evolution of the genetic code?

The genetic code today is the same in almost all organisms, and the variations in the exceptional species are only minor. In the generally small and isolated mitochondrial genomes the selective pressure for variation would seem to have been to reduce the number of tRNAs needed to decode the mRNA. This is consistent with the “frozen accident” idea (originally proposed by Crick) — once the genetic code was to a certain stage it become frozen because changes would have been lethal. Remember changing the assignment in one codon would affect all proteins using that codon, in contrast to a mutation of a single codon in a single protein to a different amino acid. Further, any codon reassignment would affect the anticodon of the tRNA corresponding to that changed codon — often interacting with more than one codon and dependent on recognition by the amino acyl-tRNA synthetase for attachment of the correct amino acid.

An alternative explanation for the conundrum

Disclaimers:
We clearly cannot know how the genetic code evolved, so all we can hope for is to find the explanation with the fewest flaws in relation to scientific knowledge at that time. Some of this answer appears to have come subconsciously from the 1968 article by Crick on the Origin of the Genetic Code, which I re-discovered after having formulated it. Other aspects (no doubt the weaker ones) are my own, but must surely have been considered by others in the 60 odd years since the elucidation of the genetic code.

Answer
It is not unreasonable to suggest that the original genetic code specified fewer than the 20† contemporary encoded amino acids and the termination signal. This would have been because of the primitive stage of evolution of metabolic pathways for amino acid synthesis (presumably catalysed by ribozymes). There may even have been fewer than 16 amino acids, although with a triplet (rather than a duplet) codon length because of geometric and energetic considerations relating to the interaction with tRNAs (themselves ignoring or interacting promiscuously with the third codon position).

So the 16 blocks of codons would have been assigned to those initial amino acids, with some perhaps taking over two blocks (Leu?). As metabolism developed, new amino acids would be added, either occupying ‘empty’ blocks or taking over half of an existing block (Phe in the Leu block?). As new amino acids were added with more functional possibilities then simple aliphatics or aromatics, and more sophisticated proteins arose, it would have become increasingly difficult to change the genetic code because of the disruptive effect this would have had.

Any theory should clearly consider, as the OP did, the amino acid tryptophan with its single codon — but, likewise, also methionine. One can envisage a situation in which the code had developed to encompass the other 18 amino acids and perhaps four stop codons, but without a specific initiation codon. Others have argued that methionine emerged late as the initiating amino acid (an early role as another aliphatic is at odds with the high metabolic cost of its synthesis); suffice it to say here that Met is chemically similar to Ile, which one assumes it displaced in the AUN block, and such a change would therefore have been generally tolerated by proteins.

I think it likely that, because of its complex structure, Trp was added late (last?) and replaced a termination codon. This is because one can argue that it would have been less disruptive than replacing an amino acid codon. First, termination does not involve tRNA and aminoacyl tRNA synthetases — the codons are recognized by release (termination) factors. This would only require mutations in these factors, which show differences between eukaryotes and eubacteria. Second, the effect of a mutation in a stop codon is just a longer C-terminal segment to the protein: termination still occurs when one of the remaining stop codons is encountered by chance. Variation in the C-terminal segments in proteins are widespread between species, in different isoforms of a protein within a species, and in the strategies viruses use to expand their repertoire of proteins from a compact genome.

†The additional amino acids selenocysteine and pyrrolysine, although of interest, are not relevant to this argument.

Not the answer you're looking for? Browse other questions tagged genetics proteins codon or ask your own question.

12
How did the genetic code evolve?

82
Why 20 amino acids instead of 64?
8
Redundancy of the genetic code
9
Evolution of the Redundancy of the Genetic Code
5
Should there be separate Ramachandran plots for an amino acid in different contexts?
5
What is the difference between silent and synonymous mutations?
5
Are redundant codons used in translation?
2
Does an N1-methyl-pseudouridine substitution in the first codon position (in mRNA) result in a different amino acid?
1
Aminoacyl-tRNA synthetase and the degeneracy of the genetic code