Use of different biotinylated GTP compounds in molecular biology

In the Cappable-seq technique 3′-Desthiobiotin-GTP can be used to label the 5′ end of mRNA. 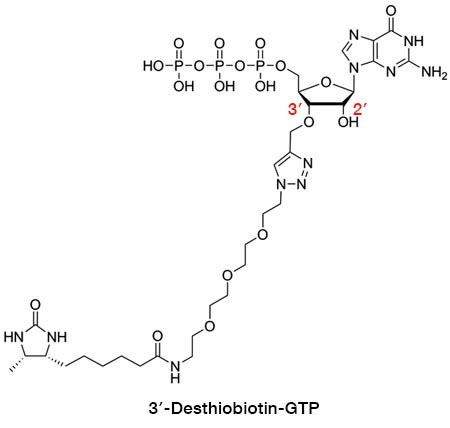 However in a commercial technical article on biotinylated-RNA affinity probes I encountered the following biotinylated cap, in which the biotin affinity tag is attached to the 2′-position of the ribose at the 5′ end of the dinucleotide. 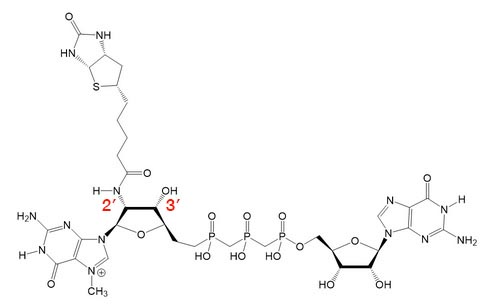 This indicates that a 2′-biotinylated GTP had been used, and will be incorporated into mRNA.

What could be the reason for this difference in tag position?

In the Cappable-seq technique, the aim is to biotinylate primary transcripts at the 5′-cap so that they can be separated by affinity columns, or with affinity beads, of the biotin-binding protein, streptavidin. It would not appear to matter if the biotin linker is attached at the 2′ or 3′ position of the ribose ring, and there may be non-scientific reasons (e.g. cost, availability) for the choice of the 3′ position.

The cap structure in the technical article is adapted from a paper by Bednarek et al. on the synthesis of a variety of such caps, for which one specific use was to pull down complexes of mRNA with eukaryotic initiation factor eIF4e. It turned out that having the biotin affinity tag in the 3′ position of the ribose ring impeded this interaction, to a greater extent than at the 2′ position. Hence the difference.

This is clear from the start of the results section of that paper, in which an additional advantage is also explained:

The affinity tag was attached at the 2′ position of m7G via an amide bond, which was possible due to the presence of the primary aliphatic amino group in the starting material—2′-amino-2′-deoxyguanosine—and in situ biotin activation with O-(N-succinimidyl)-1,1,3,3-tetramethyluronium tetrafluoroborate (TSTU). The site for biotin moiety attachment was chosen in a way that ensures the least possible interference with eIF4E interaction, because the hydroxyl groups of 7-methylguanosine in the cap-eIF4E complex are free and solvent exposed [16] (electronic supplementary material, figure S1). The ability of the cap analogues conjugated with biotin to serve as substrates for RNA polymerase in an in vitro transcription reaction was of equally high importance. In this context, the additional advantage of introducing the tag at the 2′ position is that, similar to 2′-O-methylated dinucleotides, the resulting compound can only be incorporated into RNA in the correct orientation (and, as such, belongs to a class of the so-called Anti-Reverse Cap Analogs or ARCAs).