Why do blood vessels in the eye not obstruct vision?

As light enters the eye, it reaches the photoreceptors at the "base" of the retina, which then pass that signal to the bipolar and ganglionic neurons -- the latter of which send the signal outside of the eye via their axons (collectively forming the optic nerve).

Now, I know photoreceptors exist everywhere else along the retina, so it's not surprising that we perceive vision from the otherwise broadly distributed photoreceptors.

However, my question: why do the blood vessels associated with the superficial vascular plexus (which exist between incoming light and the rest of the retina) not obstruct our vision? 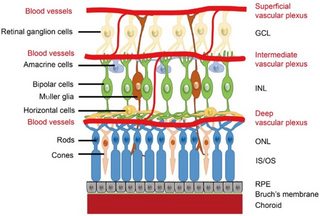 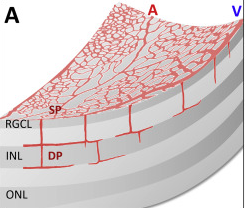 Figure 2 from the same paper shows the distribution relative to the fovea:

As you can see, it's pretty much devoid of this superficial vasculature, so anything you are directly focusing on, say, text you read on a computer screen (or even a book!) is not impacted.

Receptive field sizes for retinal ganglion cells in the primate retina are about 50-300 um, depending on eccentricity (distance from the fovea). Capillaries are going to be around the size of a red blood cell in diameter, so about 10 um; it seems like by the time you get to the far periphery, these vessels are mostly going to be quite small relative to receptive field size, and they are even a bit small in the vicinity of the fovea.

I'm mostly focusing on the RBC size themselves, because RBCs have a bit of pigment in them, but otherwise, tissue is overall quite transparent. If you've ever looked at an unstained tissue section less than 100 microns thick, you know that it doesn't look like much at all. If you've lost track of one in any volume of water, good luck finding it. For the same reason that RGCs being on the "wrong side" of the inverted vertebrate eye, this thickness of tissue just doesn't seem to be that big of a problem, and it doesn't seem that any affordances for this issue have evolved outside of the fovea in primates (whereas you can see in the figure above that there is a clear exclusion of these vessels from the fovea).

We perceive with our brain, not our eyes

The general idea of predictive coding models of the brain is that you have some generative model of the world that is constantly making predictions, and sensory organs merely provide evidence to update those models which is propagated as an error signal with respect to the original model; if everything is static and as predicted, nothing needs to be propagated in the brain to alter the perception. Much of what you think you are "seeing" at a given moment you aren't seeing at that moment at all, but merely "remembering" what you saw previously, and having not seen any evidence to the contrary, continue to "see" it there. When a person looks at an object, they do not typically look at one spot, but quickly saccade around to scan different parts of it and form a complete model of the object. It will escape attention until it moves or changes in some way.

These blood vessels are going to be quite static, and not provide much of a changing visual image, so there's nothing there for the brain to be interested in.

You CAN see your blood vessels!

Bryan mentioned that the blood vessels are typically not visible partially because they are unchanging (i.e., static). In support of that, one could imagine that if you somehow make these structures appear more dynamic, then one might be able to visualize them.

The American Academy of Ophthalmology actually recommends trying an experiment to do just that: to "see" your retinal blood vessels!

A tree-like pattern of blood vessels will become visible.

Not the answer you're looking for? Browse other questions tagged human-anatomy vision human-eye electrophysiology senses or ask your own question.

4
Why do we squint?
4
The arrangement of retinal cells?
15
Effect of pupil responses on the electroretinogram
3
What determines the shape of the center-surround receptive fields of retinal ganglion cells?
3
What is the connectivity between on-center & off-center bipolar cells?
3
What is the essential benefit of center-surround organization of retinal ganglion cells?
3
Visual phototransduction, neurons depolarization when no light: why?
3
What is the direction of the processing of light by the (human) retina and how does it happen?
3
What parts of the visual system could be responsible for a fixed, monocular scotoma?