Would viral diversity result in a change in the effectiveness of CRISPR systems in a population of bacteria, within a closed system?

I have here my hypothesis, does this make scientific sense? Assume this situation is occurring in a closed environment with only bacteria and bacteriophages.

The effectiveness of CRISPR/Cas9, being an adaptive defence system, is heavily reliant on the phages that it, or its ancestor has previously hosted. This is because Cas proteins require the virus’s physical presence in order to extract spacers from the virus’s genome and implement them into the CRISPR locus. Therefore, an environment bearing a smaller number of different virus types should theoretically lead to a higher degree of effectiveness for CRISPR systems. Low quantitative viral diversity should lead an influx in CRISPR’s effectiveness as, over time, a population of bacteria and its offspring should gain possession of spacers that provide them with a competitive advantage within their given environment. Hypothetically, this should lead to an increased bacterial population size as bacteria are now more easily able to ward-off viral infections. Consequently, this would most likely lead to a relative decrease in the viral population as the abundance of relevant spacers in the bacterial population will lead to a lower successful infection rate, causing an increased number of viruses to die upon the unsuccessful infection of a host bacterium, preventing induced viral lysis of the host, a process consisting of the disruption of the cellular membrane, resulting in the death of the host cell and the release of cytoplasmic compounds, including a large quantity of additional viral particles into the given medium, leading to a steep rise of the viral population. In contrast, CRISPR’s effectiveness should be diminished in an environment containing high levels of viral diversity as it would be far more difficult for bacteria to obtain the necessary spacers for CRISPR to be effective against the vast variety of bacteriophages in the given environment. Due to the decreased effectiveness of CRISPR systems, it would be more strenuous for bacteria to fight of viral infections, leading to a decrease in the bacterial population or a more moderate reproductive rate. Inversely, it is likely that viral population will flourish due to the scarcity of relevant spacers. This shortage in relevant spacers would result in an increased rate of infection of host cells, causing an increase in lysis and a rapidly multiplying viral population. Fluctuations in the bacterial population can be a strong indicator of the current effectiveness and efficiency of CRISPR systems as its main purpose is to aid bacteria in their survival. Quantitively, a good representation of the fluctuations in bacterial population size is percentage (%) rate of change. Percentage rate of change of a population provides a concise value that indicates whether the population in question is stagnant, increasing, or decreasing.

To me, it makes perfect sense, but I am not an expert in this field, just a high school student.

When I plugged this relationship into an online simulation, found here, I obtained a trend that suggested there is no correlation between viral diversity and the size of a bacteria or virus populations. I'll attach below a graph that shows the relationship I obtained.

Figure 4: Scatter plot graph showing the relationship between viral diversity (maximum virus types | 20, 40, 60, 80, 100) and the percentage (%) rate of change for both the bacterial and viral populations over a period of 500 ticks, within a closed environment. Graph includes two trendlines for each dependent variable, along with an equation for each line, a R2 value, and a R value. 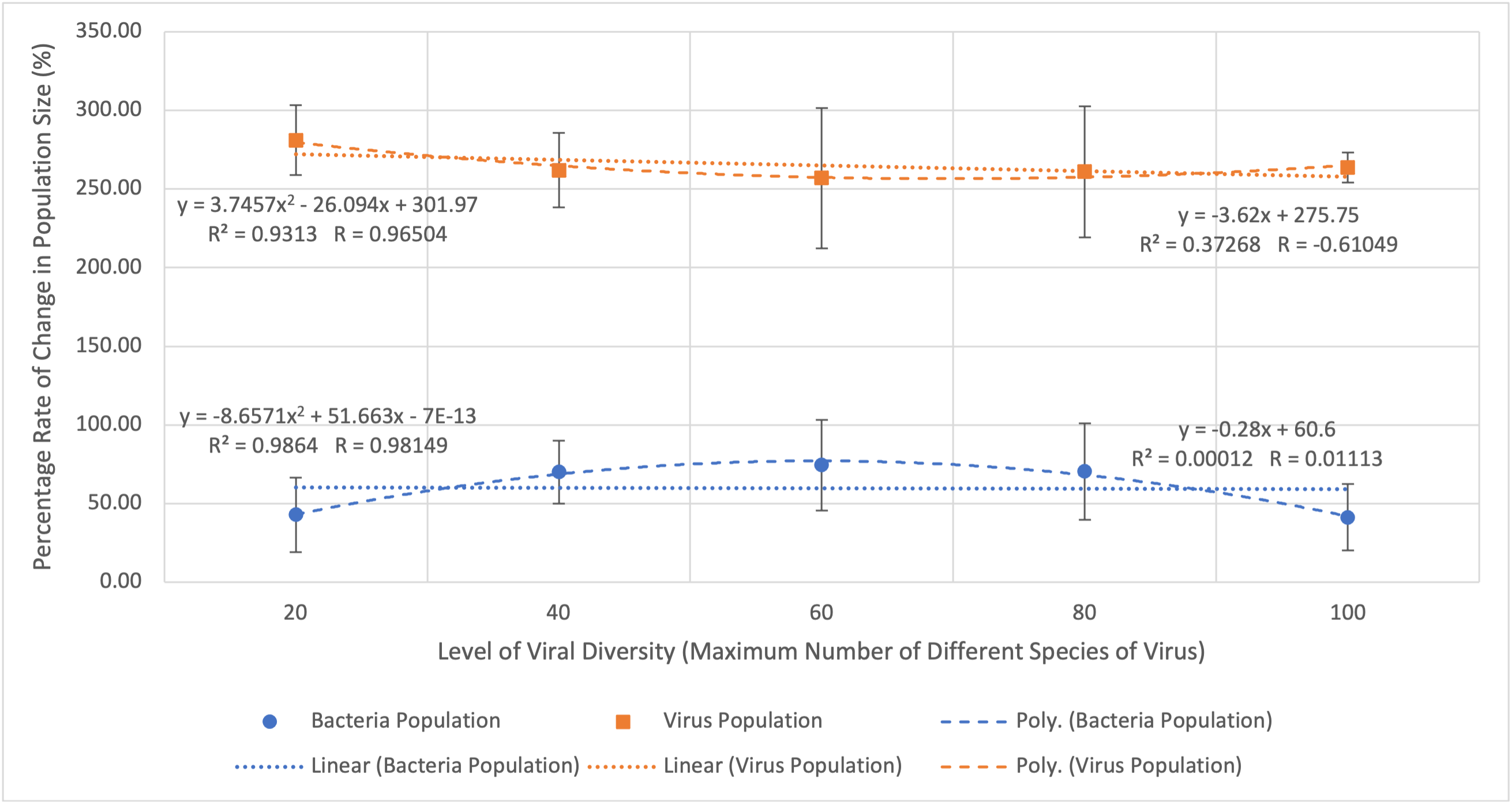 Just looking for some insight, have I got this all wrong?

3
Could the growth rates of Vibrio vulnificus be affected by an oil spill?
1
How do you interpret this microbiology/ bacteriology research figure?
3
When analyzing whether selection favors an allele that allocates indiscriminately, should the initial frequency of the allele be considered?
14
What kinds of bacteria live in water bottles?