How does HIV assemble its capsid correctly?

HIV’s capsid is very unusual. The capsid is made of around 1200 identical CA proteins (p24). These CA proteins first assemble into either pentamers or hexamers, which assemble into a fullerene like polyhedron containing 12 pentamers at the vertices and about 200 hexamers filling the bulk. Compared to other viral capsid, HIV’s capsid is unusually big (with an equivalent triangulation number of T=1200/60=30) and highly asymmetric. Instead of a perfect icosahedron made of 20 equilateral triangles, the edges are of different lengths (as well as the h and k numbers https://viralzone.expasy.org/8577) in HIV’s capsids, and even two HIV can have slightly different capsids.

It should be difficult for such complex structures to be assembled correctly because the structural environment is very different among the subunits. For viruses with small and symmetrical capsids, the symmetry is guaranteed by the fixed binding angles between subunits (because the structural environment is equivalent everywhere). More complex viruses can encode multiple types of capsid proteins taking different positions. For example, the capsid of poliovirus can be modeled as a soccer ball, with each pentagon made of 5 VP1 and each hexagon made of 3 VP2 and 3 VP3. However, HIV’s capsid is solely made of CA, which means the very same CA need to adapt to the highly variable structural context. Some complex viruses like herpes viruses encode scaffold proteins to guide the capsid assembly, which is unlikely true for HIV as HIV’s capsid is self-assembled. Despite its irregularities, HIV’s capsid is perfectly sealed off, which is unlike murine leukemia virus with large gaps in its capsid (https://www.pnas.org/doi/abs/10.1073/pnas.1811580115?url_ver=Z39.88-2003&rfr_id=ori:rid:crossref.org&rfr_dat=cr_pub%20%200pubmed). How can the seemingly simple CA proteins assemble into such complex structures accurately?

How capsids self-assemble isn't fully known for any virus, but it's been studied a lot and there are a number of principles we can apply. First, HIV isn't as unique as you assume. 30 is a fairly large triangularization number, but Faustovirus has T=277, and Mimivirus is estimated at over T=1000. The conical shape of lentiviruses is indeed very unusual, but if we look at how that shape is constructed, it seems less exotic. Hexagons can tile infinitely on a 2D plane or cylinder. However, if a hexagon is replaced with a pentagon, the tiling is distorted such that the plane becomes curved. The geometry works out so that replacing 12 hexagons in a lattice with pentagons will create an enclosed shell, regardless of size. If the pentagons are evenly spaced, the shell is an icosahedron. However, many bacteriophage build a cylindrical region between two half-icosahedral endcaps, with 6 pentagons at each end. This type of capsid is called "prolate", and the well-known T4 phage uses it, as well as the elongated "corndog" phages shown below: 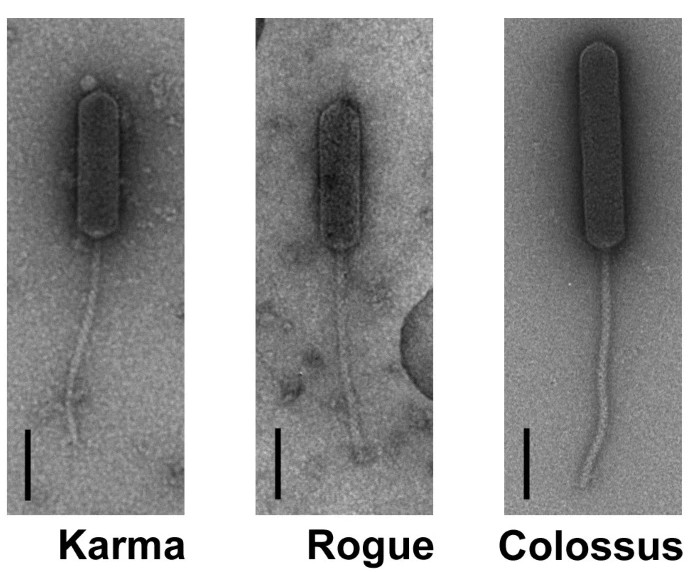 The conical capsids of lentiviruses like HIV have a similar geometry to these corndog phage, except the two endcaps are asymmetric; with 7 pentons at one end and 5 at the other. If HIV was like many large icosahedral viruses and encoded different proteins for the pentons, arranging them correctly would be difficult. However, the current theory is that the overall geometry is imposed on the maturing HIV capsid, and CA protein simply changes into a pentameric arrangement where the local curvature of the immature lattice is too great for hexameric arrangement. From Unclosed HIV-1 Capsids Suggest a Curled Sheet Model of Assembly, referencing Nonequilibirum Assembly, Retroviruses, and Conical Structures:

Levandovsky and Zandi used tapered triangular prisms to represent CA units and were able to recapitulate spherical, conical, and tubular shapes.26 Tapering caused growing sheets to curve, and as the curved sheets grew, inclusion of pentamers became necessary to relieve accumulated stress. Opposing edges of the growing sheets eventually curled around toward each other and connected and then the top and bottom ends sealed. Conical shapes therefore emerged not as a result of template interactions or membrane enclosures but through simple nonequilibrium growth of elastic sheets.

The overall shape of the CA immature lattice before the conical core forms is guided by two forces that mimic the "scaffold" proteins used by other viruses. These are the outer membrane and the inner RNA payload, to which CA is stuck via the MA and NC subunits of the Gag polyprotein, respectively. This figure from Assembly and Architecture of HIV illustrates how the constraints of the membrane and RNA leave the Gag units organized in a way that allows the CA units to organize into the required shape once they are cleaved free: 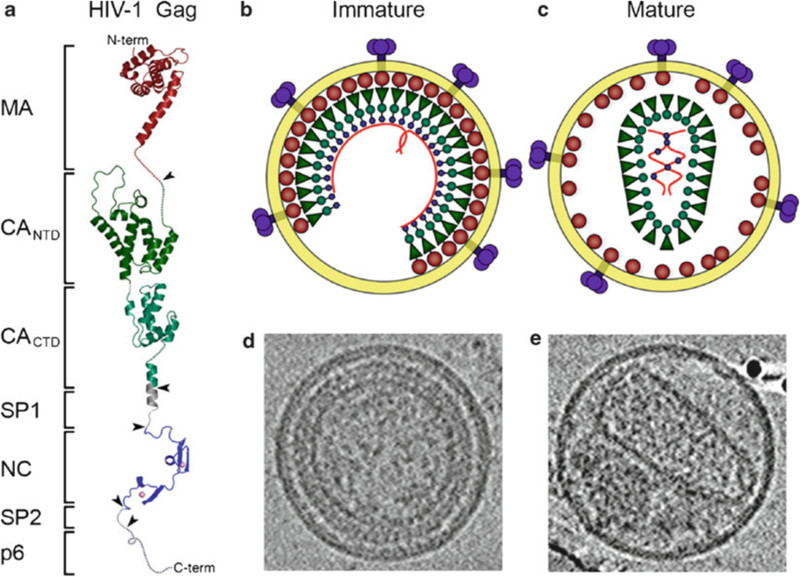 17
How does herpes (HSV) infection suppress HIV?
3
What happen's to a virus's capsid after it injects its genetic material into the host cell?
24
How did scientists discover HIV?
2
How does the body detect irreversible binding to receptors?
0
How much of the genotype-phenotype map do we understand in HIV?
0
How does HIV know to attack specific immune system cells?
5
Is viral single-stranded RNA in the absence of reverse transcriptase infectious?