How do I know if the claims of a scientific paper are generally accepted?

I am looking for information about the use of glucosamine and chondroitin for treatment of back pain and disc degeneration. A paper published in Military Medicine in 1999 reported some beneficial effects, but newer papers (references needed) do not support these conclusions.

How do I search for more recent papers that cite this older paper, to decide what the current medical consensus is?

Glucosamine and Chondroitin Sulfate(good results but not conclusive)

human-biology health publishing
Share
Improve this question
edited May 10 at 17:04

Papers provide evidence for or against various hypotheses, but no one paper is ever a definitive statement on an issue. It is expected that different trials will have different outcomes, both due to differences in the studies themselves (different inclusion/exclusion criteria, different study population, different dose/procedure, etc) and random statistical variation.

It's also very important to recognize that most studies are designed to test whether there is sufficient evidence to reject a null hypothesis of no effect. Failure to reject that null hypothesis does not mean that there is no effect, it means that the results aren't different enough from what you'd expect to see if there was no effect. It may be that there is a smaller effect than the study was powered to detect. Also, consider that a properly powered study generally has a true-positive detection rate of somewhere between 80 and 90%; that means, 10-20% of the time when there's a real effect of the expected size, the study won't be able to conclude there is a significant difference.

So, when there are multiple studies with different results, how do we decide what is "right"? Well, scientific consensus is built over many studies. In clinical research, the best evidence is when you have not only clinical evidence of an effect, but also an understood biological mechanism. At just the clinical level, though, studies can be combined through techniques of meta-analysis. Meta-analysis combines results from multiple studies, weights them by the size/quality of the study, and makes a comprehensive quantitative estimate from the covered literature. If you want to look for scientific consensus on something, you often want to look for recent meta analyses of that topic. In the medical field, there are also often consensus papers written on particular topics. Here's an example:

These statements are written by a bunch of scientists/physicians gathering together and comprehensively reviewing literature on some topic. They typically will weigh not only evidence for effect like in meta analysis, but also consider the implications of treatment options including costs, side effects, and the consequences of getting it wrong (for example, if a treatment following a wrong diagnosis masks some other condition that then goes untreated).

@BryanKrause has given a good general answer to this question.

One specific approach (which the poster may or may not already have taken) is to look for links on the publisher’s webpage to subsequent papers that have cited the one of interest. In this case the page shows that there are 107 papers in Web of Science citing the article in question. It also gives direct access to Google Scholar and Crossref. Click and go. Happy reading! 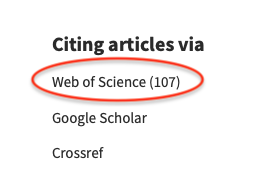 Use google scholar and have a look at the papers that have recently cited it by filtering for the year the citing paper was published.

More broadly it's often taken that more citations is a positive, though this is impacted by all manner of phenomena and a high citation count could be due to papers negatively reviewing it!

Not the answer you're looking for? Browse other questions tagged human-biology health publishing or ask your own question.

8
How does the brain instinctively know the math behind Newtonian Physics?
7
How should I put a large phylogeny into a scientific paper?
9
Comment on the introduction to a bioinformatics paper
5
How does a biologist decide when she has enough results to publish a paper?
14
How do we know the presence of light when our eyes are closed?
5
How do I know which alleles the parents have?
7
How do we know that mild forms of rabies are nonexistent?
14
Was the Harcourt COVID-19 isolate paper ever published?