What is the heredity model of the following heredity tree?

I have the following heredity tree:

and I need to decide which heredity model it fits the most, with the least number of assumptions, from the following models:

I think the answer is autosome recessive because of the following analysis: 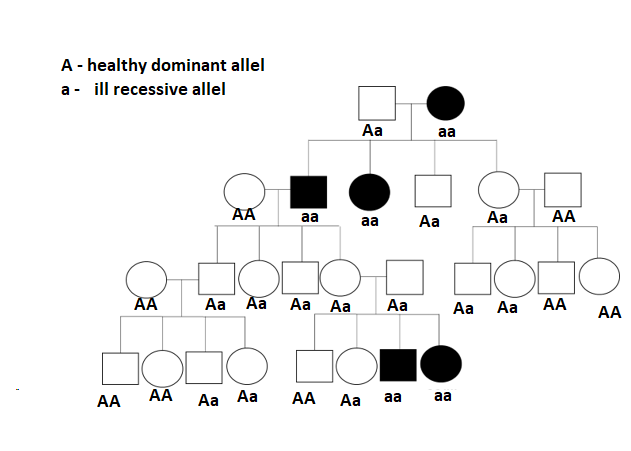 and the only assumption which is significant (the other assumptions are about the non-family members which are that they are carriers of the hilliness, it isn't said that the illness is rare, so in examining any model different assumptions about the out-of-family members are made) is the assumption on the last generation where there is two ill persons instead of one if we cross their parents alleles: AA, Aa, aA, aa, but we got 2 aa and AA, Aa, but that can be explained by little statistics in the family, so it is hardly even an assumption at all.

Then I've been told that it is a rare illness and that it autosome illness and not a linked one, its also said as a clue that there may be some Mendelic exceptions (known exceptions from the Mendel heredity models). So In my understanding its more probable that the model with this data is autosome dominant with father genomic imprinting the following way": 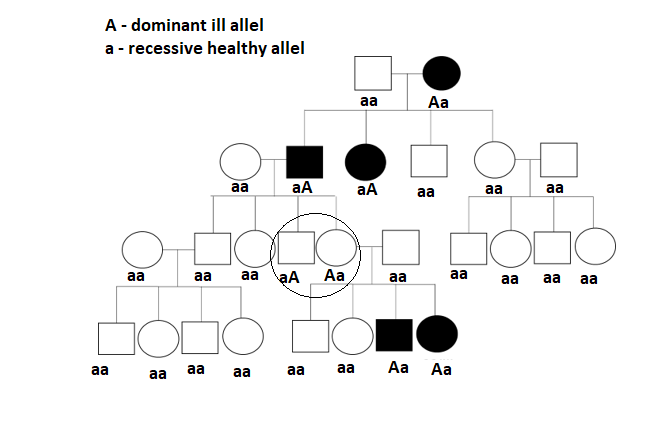 As you can notice for the classic autosome dominant model the circled one should be black (ill) but they are not, so my assumption according to the clue that the ill alleles are imprinted in fathers (males) and expressed only when they inherited from mothers (females).

Till this part I would like you to check me did I any wrong in this analysis, but my major question that made me doubt my analysis is the following:

In addition to previous data, is is now given the the ill girl in the 4 generation (which is black circle on the image) got pregnant from one of two males:

male A: healthy male with both parent healthy and and Homozygous both. male B: ill male with one parent Homozygous and the second parent Heterozygous

It is also given that no matter who is the father, the chances of getting an ill child are 50%.

From the previous analysis I decided that the heredity model is dominant autosome, so the first contradiction to that, that one of the parents of male B is Heterozygous, means he carries the ill allel and the healthy allel, but then in dominant model he has to be ill, but it said both parent are healthy.

The second thing that should correlate to the model is the chances computation. If the girl is Aa as was established by previous analysis then if the father is male A, i.e. his alleles are Aa (because he is ill with parents which are aa and Aa), then the chances for a ill child are 3/4 because the options are {(A_father, A_mother),(A_father, a), (a, A_mother), (a,a)} and if the father is male B then his alleles are aa because his parent are both aa, then the chances of an ill child are 1/2, so the total chances are (3/4 + 1/2) / 2 which is 5/8 which isn't 50%.

Or maybe this is wrong for male 1, because if the ill phenotype is delivered only by women (mothers) because of male genome imprinting, then for the option {(A_father, A_mother),(A_father, a), (a, A_mother), (a,a)} only two will make the child ill and not 3 : (A_father, A_mother) and (a, A_mother), then the calculation will be (1/2 + 1/2) / 2 which is 50% indeed, and for the parent of male B being Heterozygous but not ill can be explained by the assumption that he/she got the allel from his father.

It made me doubt because if the model was autosome recessive, then the computation would give me exactly 50% without thinking and explaining about the male's B Heterozygous parent (which then would be healthy just a carrier), but then the previous tree seem to be much more complicated because if you only look at the first generation in this model: if the father is AA (A - healthy dominant allele, a - ill recessive allele) and the mother is aa, then they shouldn't have any ill children (because their cross is {Aa, Aa, Aa, Aa}), but they do, that's why I started to doubt is it dominant autosome as I concluded.

Browse other questions tagged genetics human-genetics allele pedigree or ask your own question.

2
Recessiveness of allele for protection of organism
2
Chance of child inheriting at least one copy of an allele - heterozygote mother, unknown father
3
Concept and analysis of Pedigree
0
How do you find probabilites of carrying an X linked recessive disease in a blank pedigree given only one phenotype?
2
Why is the mechanism of inheritance for this disease autosomal dominant?
3
Genetics, sickle cell anemia
0
Inheritance of FEVR (Genetic Disease)