How is a haploblock defined with only one SNP location? 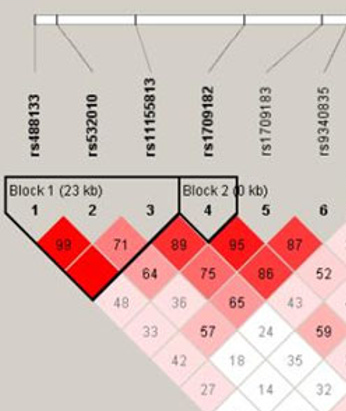 In Figure 2 how are haploblocks determined when all SNP locations compared are displaying high linkage disequilibrium? Also, why are locations 5 and 6 excluded? 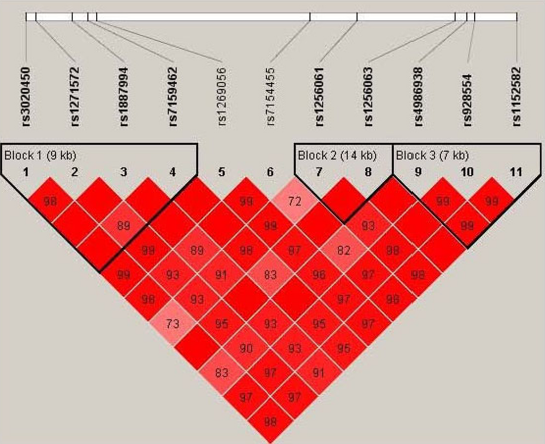 In the methods, it is stated that haplotype blocks were inferred with the software Haploview:

Genotype information for ESR1 and ESR2 and regions approximately 10 000 base pairs up- and downstream of these genes were downloaded from HAPMAP in May 2005 [33]. Genotype data for the population of individuals of European ancestry were visualized using Haploview [34]. We initially selected tag-SNPs defining all haplotypes with frequency > 5% from the block-by-block tags displayed in the HAPLOVIEW "Haplotypes" window. However, sometimes these tag-SNPs were exchanged to other SNPs on the same haplotype due to difficulties in designing genotyping assays. In addition, in regions not covered by common haplotypes we aimed to select one common SNP (allele frequency > 5%) every 5 000 base pair. No non-synonymous SNPs full-filling these criteria were detected in the ESR genes.

The default algorithm is taken from Gabriel et al, Science, 2002. 95% confidence bounds on D prime are generated and each comparison is called "strong LD", "inconclusive" or "strong recombination". A block is created if 95% of informative (i.e. non-inconclusive) comparisons are "strong LD". This method by default ignores markers with MAF < 0.05. The MAF cutoff and the confidence bound cutoffs can be edited by choosing "Customize Block Definitions" (Analysis menu). This definition allows for many overlapping blocks to be valid. The default behavior is to sort the list of all possible blocks and start with the largest and keep adding blocks as long as they don't overlap with an already declared block.

So, assuming that they used default parameters, you can reconstruct their methodology from the default method documentation and their description:

In figure 1, the SNPs displayed are all tag SNPs. They are not the only SNPs in the block, but rather the tag SNPs used to represent the block. I am not clear on why multiple SNPs are used in some cases and single SNPs in others, unless they just try to have 1 SNP every ~5Kbp in general. I don't think that's what they did, judging from the figures.

In Figure 2, presumably the blocks are the output of the Gabriel et al. 2002 algorithm using D'.

The single SNPs that are not part of any block are presumably derived from the "every 5Kbp" procedure for regions not labeled with haplotype blocks.

Not the answer you're looking for? Browse other questions tagged genetics molecular-genetics population-genetics genetic-linkage or ask your own question.

1
How to compare SNP from genotyping results for multiple people with a known phenotype?
5
How do you merge SNP data with a reference genome?
10
How is genetic speciation defined?
8
Would a colony with only one male and female collapse?
1
How does gene editing in one cell affect other cells?
1
Can a phenotype only have one allele?
3
How is "selection" best defined?
1
How are haplotype blocks different from genes?