What dissociates first - the last tRNA, mRNA and release factors or the subunits of ribosomes?

I tried searching this from Lehninger but couldn't get a clean answer.

Shigeta's got a point: the ribosome is latched onto the mRNA so those two are intrinsically linked. You're really asking whether the ribosome comes off first or whether the tRNA does, but it's actually the new polypeptide, which makes sense:

This minireview puts forth a model (see below) where, in E. coli at least, the 50S ribosome subunit is then dissociated from the mRNA/30S subunit/tRNA complex, following which the final tRNA is removed. An in-depth review from a few years later gives more context. 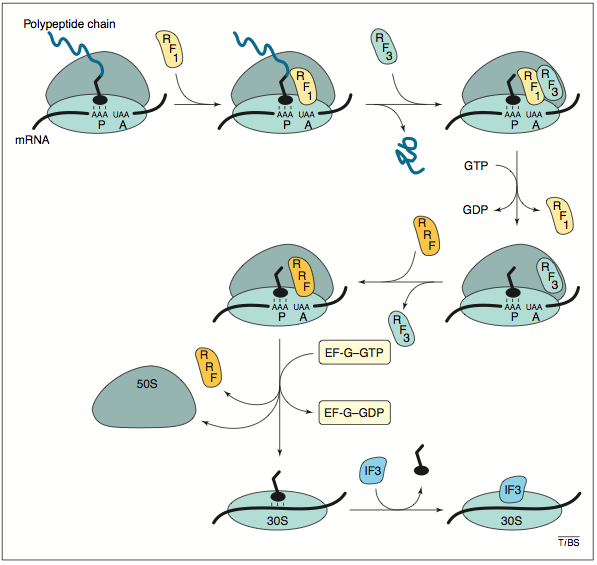 just off the top of my head... since the ribosome is made of 2 large complexes which assemble and clamp onto the mRNA, I'd say it was the tRNA first, then the ribosome and mRNA would detach simultaneously.

Not the answer you're looking for? Browse other questions tagged molecular-biology cell-biology translation ribosome mrna or ask your own question.

5
What is the distance between the 3' 18s rRNA (the Kozak consensus sequence) and the A-site of eukaryotic ribosomes during protein translation?
5
What is the advantage of the way eukaryotes initiate translation?
7
What exactly happens if during translation, an amino acid is not present?
2
Why does the inhibition of translation initiation cause the accumulation of 80S ribosomal monosomes?
3
Was there originally a non-ribosomal way of synthesizing proteins?
3
Identification of proteins in this animation of a ribosome translating mRNA
1
How does the tRNA recognise the first methionine during translation?
3
Why did translation develop a specific codon for initiation?
3
The shape of mRNA
6
How can a good SD / Kozak sequence enhance translation efficiency?