What is meant by "Common descent"?

"Common descent is a concept in evolutionary biology applicable when one species is the ancestor of two or more species later in time." (Wikipedia) 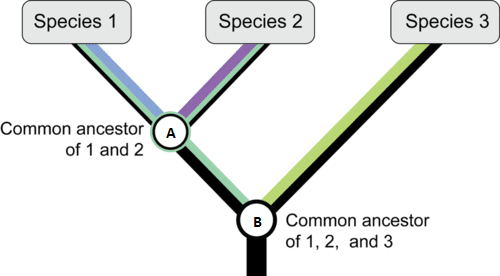 [Credit:https://bio.libretexts.org/Bookshelves/Introductory_and_General_Biology/Book%3A_Introductory_Biology_(CK-12)/05%3A_Evolution/5.12%3A_Phylogenetic_Classification (I added the letters to the common ancestor nodes)]

I was thinking that "common descent" means the immediate previous ancestor. After all, it's a relative matter and there will be a common ancestor at some point. There has to be a term for that other than "just previous common ancestor".

The Wikipedia definition is suitable to say that species 1 and 3 share common descent.

Common descent is a concept in evolutionary biology applicable when one species is the ancestor of two or more species later in time.

Any node in a (fully bifurcating) tree that is an ancestor to more than two tips will necessarily contain tips that are also descended from some other node.

OP is correct that "there is a common ancestor at some point," and there is strong evidence that all cellular life arose by common descent from our most recent common ancestor.

The thick black line coming down from B in the figure represents the connection to B's ancestors. All of those ancestors are common ancestors of 1,2,3, but none are the most recent common ancestor of 1,2,3.

OP may want to review the term clade for a slightly more precise way to talk about related species. A clade is a group composed of an ancestor plus all and only its descendants.

B is the ancestor of 1,2 and 3. Why do you think that is not an example of common descent between 1 and 3?

Not the answer you're looking for? Browse other questions tagged evolution terminology classification or ask your own question.

21
Do large animals often evolve into smaller animals?
10
What is the closest species to humans in animal kingdom?
1
Genetically speaking, are dogs exactly similar to humans and chimps both?
7
Term for trait that is advantageous to a population only as long as it is rare
1
What are the evidence that all life today descended from a common ancestor (LUCA), and which organisms (if any) challenge the concept?
11
How can the number of genes increase through evolution?
1
Endogenous retroviral insertions as evidence for evolutionary relationships among primates
17
Do all living humans literally descend from one ape?
1
Usage of "lineage" over "species"
3
Rationale behind Most Recent Common Ancestor (MRCA)?