In their article (Context-dependent optimal substitution matrices for exposed residues (Koshi-Goldstein, 1995)), more precisely in the substitution matrix displayed in Figure 2, one one hand, the legend says: "Graphical representation of the probability of a mutation from the amino acid in a given row to that in a given column during an evolutionary time of 40 point-accepted mutations per 100 residues"

And on the other hand, I've noticed it is a lot more likely for an amino acid to be deleted than to be inserted (cf. screenshot, blue is low probability, orange/red is high probability). 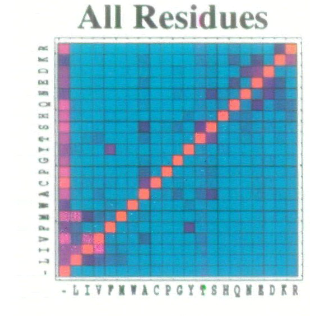 How could one explain that? If that was true, all proteins sequence would slowly become smaller and smaller, right? Is it because it doesn't consider when proteins sequences merge? (I'm no biology expert, I'm sorry if the vocabulary I'm using is not exact. You are encouraged to correct me).

It seems that there IS a deletional bias across genomes Kuo & Ochman 2009:

Based on over 5,000 indel events in noncoding regions, we found that deletional events outnumbered insertions in all groups examined.

That would be one mechanism of genome shortening. However, there are mechanisms that also increase the size of the genome:

So although small edits tend to be on the deleterious side, big edits are the opposite, causing an overall expansion of the genome.

8
Is consuming proteins different vs. consuming amino-acids and how?
7
Classifying Polypeptides (and/or Proteins)
5
Confusion on polarity and hydrophobicity of Proline, Tyrosine and Cysteine?
1
How does one predict how large of an effect on antigenic drift a substitution in the amino acid sequence of a surface protein of influenza has?